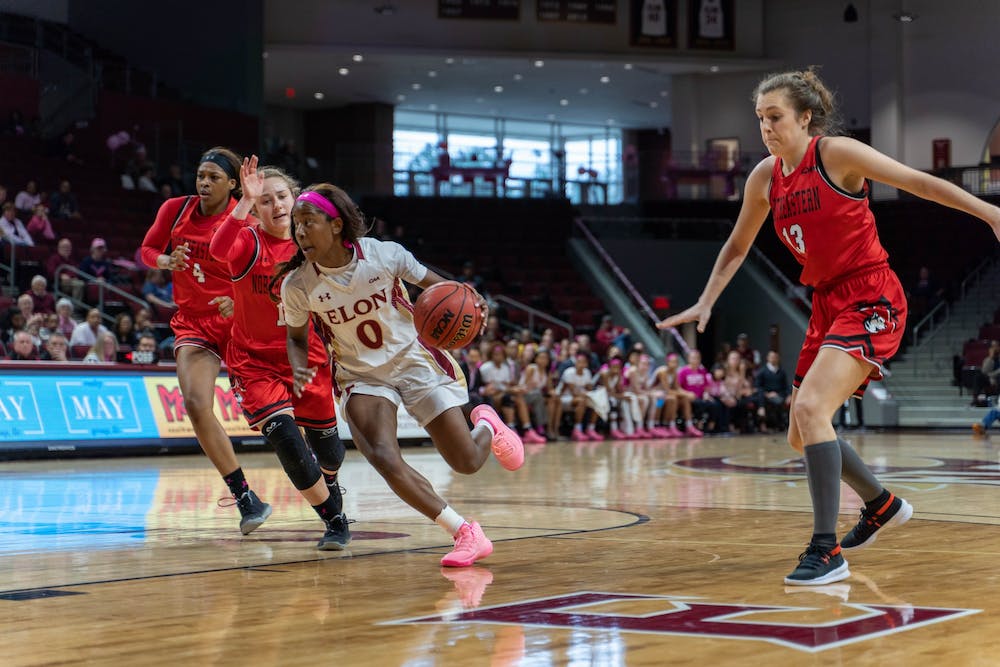 Today’s game honored cancer survivors, one of which was Venessa Corbett. Corbett, a former Elon women’s basketball player, had her jersey retired before the game started, becoming the first Elon female athlete to have her jersey retired.

“It was an awesome day today, an awesome day to recognize Corbett, having our jersey retired which was well deserved and it was an awesome day to represent the Play-4-Kay foundation today in hopes of finding a cure for cancer,” Head coach Charlotte Smith said. “It's a very sobering reality. When you walk into a locker room and you have your guest coach, who's a breast cancer survivor, do the postgame speech... It just makes you realize that life is bigger than basketball.”

The Phoenix was behind for most of the game, falling short against the Huskies aggressive defense. At the end of the half, the Phoenix would not complete a single shot from three, and went less than half from the field.

Junior Ariel Colón started off strong, earning the Phoenix first six points of the game. Colón remained the highest scorer of the half with 16 points, earning over half of the Phoenix’s first-half points. The half ended in Huskies favor 34-21.

“It seemed like there was a cap on the rim,” Sophomore Kayla Liles said. “I mean after today I think we just need to get back to what we've been doing and get back in the gym and keep putting up shots because they're going to fall eventually.”

The second half provided more of the same energy, with the Huskies becoming more aggressive as the Phoenix attempted to match them.

“I didn't anticipate it being a rugby competition but it was,” Smith said. “It just varies from game to game and you just don't know how to play.”

Junior Saadia Munford stepped up for the Phoenix, hitting shots when she could. The combined efforts of Munford and Colón were still not enough for the Phoenix to muster a comeback.

“[At halftime] we said that we need to drive to the basket more, and I think that since they were in a zone that was pretty tough for us, but I mean, we kept shooting the ball,” Liles said. “We drove a couple times, got a couple kick outs, but we just got knocked down shots at the end of the day. We don't knock down shots, outcomes not gonna be our way.”

The Phoenix will travel for the next three games, playing against the University of Delaware Hens on Friday, Feb. 21 at 11 a.m.