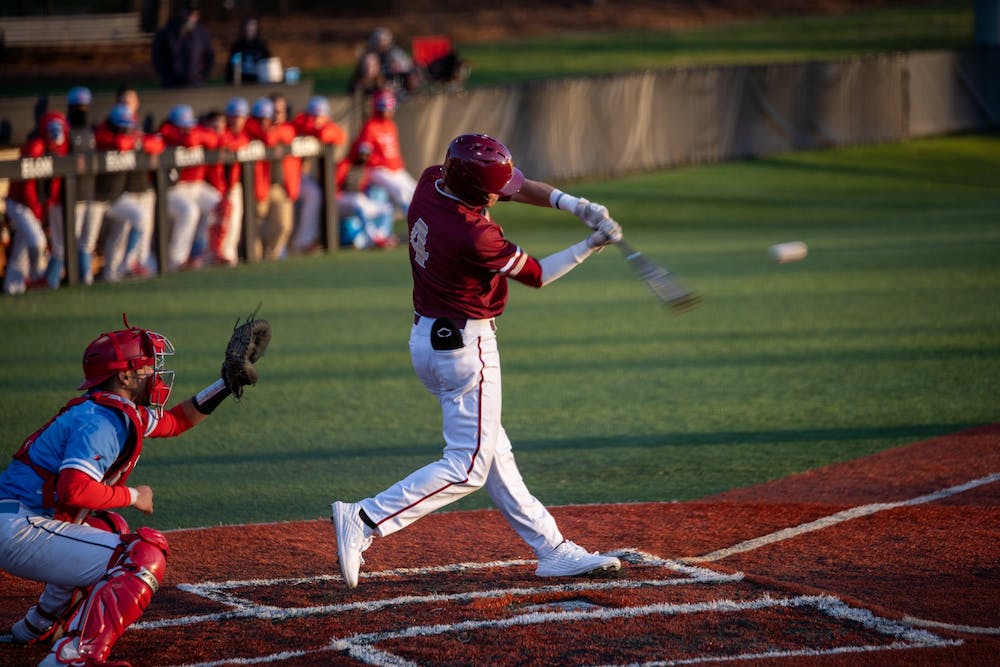 
Elon University junior and infielder Adam Spurlin hits a home run and brings in 2 other players in the fourth inning against the Delaware State Hornets in Latham Park on Friday Feb. 14. The Phoenix beat the Hornets 16-4.

The Elon University Phoenix baseball team (1-0) opened up its season with a bang against the Delaware State University Hornets (0-1), winning 16-4 in the first of a three-game series. The Phoenix are coming off of a successful previous season, making it all the way to conference championships before falling to the University of North Carolina Wilmington.

Then it was the Phoenix’s turn in the fourth.

Of the nine batters who came up to bat, seven of them would bring in their own runs by the end of the inning. Scoring opened up with senior Garrett Stonehouse, and would be expedited with a three-run home run off the bat of senior Adam Spurlin. In a time span of two innings, the Phoenix would bring in 13 runs, pushing the score to 15-2 by the fifth inning.

Stonehouse said that the players in the dugout were “going pretty wild."

“It feels good to finally, some unfamiliar faces,” Stonehouse said. “Obviously, Delaware State comes down here and we can't take anyone for granted, that was kind of the message going into everything, play tough for the full nine, and we did that today.”

Head coach Mike Kennedy was excited for the team’s victory but wasn't ready to say that the team played perfectly. “I don't know if I’d call it nervous energy, I just thought we played with some jitters a little bit early,” Kennedy said.

A victim of those jitters, Kennedy said, was starting pitcher junior Jared Wetherbee. Wetherbee ended his night with the highest strikeout count with six, but also had the highest walk count, ending with five and runs allowed with two.

“He’s a high-strung guy anyway,” Kennedy said. “It was hard to calm down and you know, so the ball was up all over the place, but you know it's day one and you get it out of the way and I think he’ll be fine. I’m not worried about him.”

A player Kennedy was glad to see back on the field was Stonehouse. Stonehouse was out for almost 11 months recovering from a right knee meniscus tear when he finally started playing again when the baseball team traveled to the Dominican Republic.

“I got a chance to get out here in early fall, just get my reps in and whether it be tee-work, just limited stuff,” Stonehouse said. Stonehouse ended the night with two runs and two hits.

The Phoenix will play Delaware State again Saturday at 2 p.m. in Latham Park.