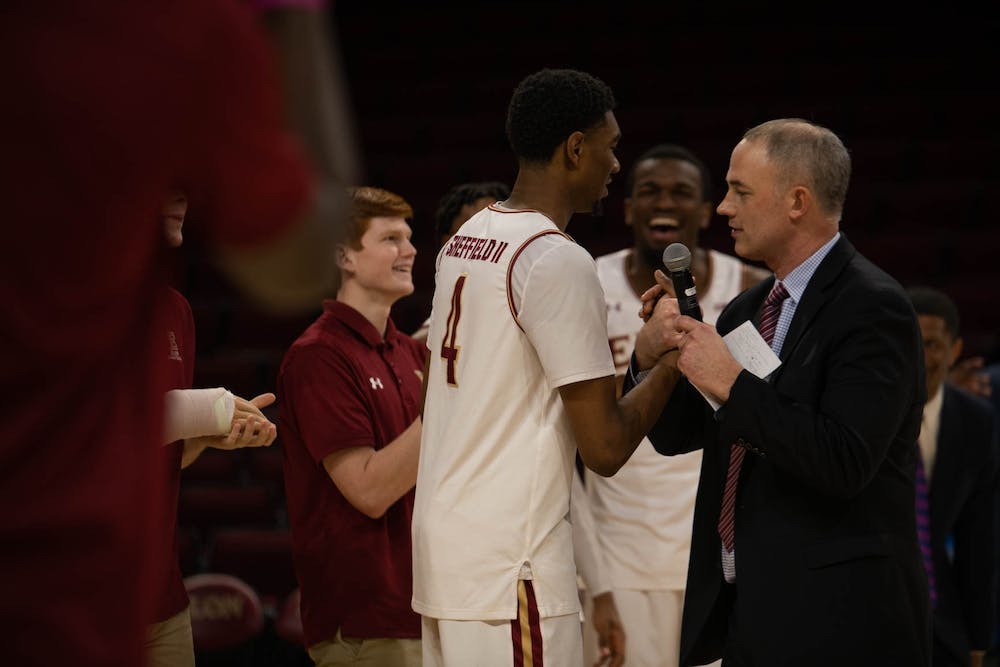 The Elon University Phoenix (10-18) defeated the Drexel Dragons (13-14) in the Phoenix final home game of the season, 75-70. The game also marked this year’s senior day, as the Phoenix honored two graduating members, Seth Fuller and Marcus Sheffield II. Fuller was part of the starting lineup for the first time this season and only the sixth time in his career.

Fuller, a redshirt senior, has been battling injuries from what felt like day one. His progress and improvement he showed this season made head coach Mike Schrage feel confident enough to put Fuller into the starting lineup for today’s game.

“I just said ‘hey guys, I can’t say I’m going to do this every senior day, but this senior deserves it, Seth Fuller is going to start tomorrow’,” Schrage said. “As he went to the weight room, and we got together as a staff in the locker room for a minute, I went out to the hallway and Seth was there waiting for me, and he's like ‘coach you don’t have to do that, I'm good.'”

Fuller came up big in a few moments tonight, starting off with a three-pointer to get the bench rocking.

“It felt great, you know, I had the support of my teammates this entire year but to hit a shot on this day and for the bench to go crazy like it did definitely gives you a little boost,” Fuller said. “They've been supportive all year. You know, I've been in-and-out with injury and stuff, but they've been great, so it was a good thing.”

The Phoenix started off strong, but when the Dragons started climbing back, it seemed to be a rewrite of the same story. The Phoenix lost it's lead with 13 minutes left to play in the first half, and wouldn’t claim it back until the second half.

“They out-competed us at their place, especially in the second half, and I thought they did in the first half. And that was disappointing,” Schrage said. “We still have a very low margin for error, so if we're not willing to make that toughness and energy play if you want to call them that all the time, we're not going to continue to get the results we want.”

The second half still proved to be difficult for the Phoenix, the two teams playing consistently back-an- forth. Freshman Hunter Woods put down six points in a row to tie the game early in the second half, but it wouldn’t be until Fuller’s second three of the game that the Phoenix would regain the lead 51-50.

“I thought after that first four or five, six minutes, we kind of became the team that's been successful,” Schrage said. “I knew it could potentially go down to the wire, we're playing a really good team, a team with a lot of pride but I felt like the game was in the ‘taking mode’ so to speak. That's what we want to work our way back to, getting the momentum back in the game and just grinding it out.”

The final five seconds of the game seemed to be never-ending, between Drexel timeouts, foul calls and everything in between. With four seconds to go, Drexel’s Camren Wynter put up two free throws to push the game to just three points apart, 73-70. Two free throws by Sheffield concluded the game’s scoring, as well as his time playing at Schar Center. Schrage subbed out Sheffield after his free throws to a standing ovation from the crowd.

“This is not really anything I would have expected, like, when I first decided to come here. Just to come off the injury and what not I didn't really know what to expect,” Sheffield said. “To have that feeling after the game felt amazing, just like everybody just showing support and just loving on me stuff like that.”

The Phoenix will look to continue this momentum in its first game of three away against the James Madison University Dukes at 7 p.m. on Feb. 20.