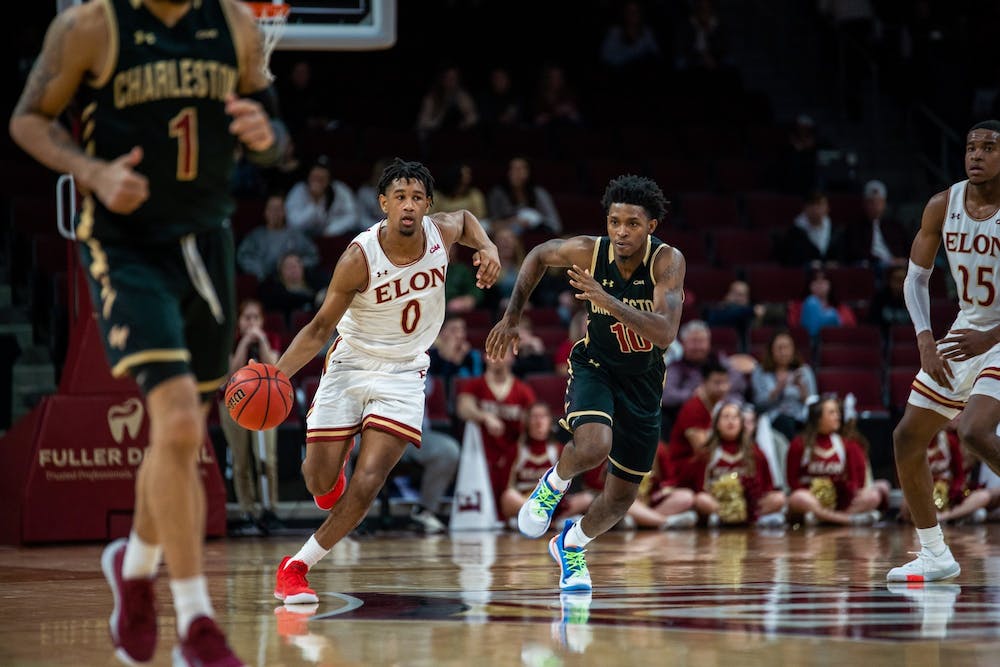 Photo by Clare Grant | Elon News Network
reshman guard Hunter McIntosh makes his way down the court in a February 8th game against College of Charleston.

The 2020 season has been a tale of highs and lows for the Elon men’s basketball team (9-17). As the team turns towards its final month before the conference tournament, the Phoenix has hit a high of the season due in part to its emerging young talents.

Since Feb. 1, the team has strung together three straight wins, two of which came on the road. The team posted strong victories against Northeastern University and University of North Carolina Wilmington. The team finished its road stretch by toppling the then No.1 team in the Colonial Athletic Association (CAA), the College of Charleston Cougars, 72-65. Prior to Saturday’s match-up, the Phoenix were 7-22 all time against the Cougars.

The Phoenix were willed to victory by graduate guard Marcus Sheffield II, who tied a career high in points with 31. Sheffield has been the headstrong leader in the midseason revival. The graduate transfer has led the team in points, rebounds and blocks in all three games and has accumulated a whopping 77 points, 27 rebounds and nine assists during the course of a week.

Alongside Sheffield is a young leader of the Phoenix, freshman guard Hunter McIntosh. The rising star tallied 38 points, seven assists and 13 rebounds in the same week stretch. McIntosh is emerging as the Phoenix newest floor general and has learned from his graduate counterpart about mental preparation.

“He has a natural maturation to his game,” McIntosh said. “Obviously you know he’s a great player, but his mental side, his preparation side is what I’ll take with me going forward.”

The 3-point game has been integral to the Phoenix offensive success this season. The Phoenix have scored 254 three-pointers this year. This mark brings the teams average to 9.76 3-pointers per game, just .69 short of last year’s average.

This year, 3-pointers are more equally distributed, even coming from younger players. The top four shooters on the team are within nine 3-pointers made of each other. McIntosh leads the team with 51 free throws. His classmates Hunter Woods and Zac Ervin join McIntosh and Sheffield to round out the top four.

“On our team everybody is capable of shooting the basketball,” McIntosh said. “That’s kinda what’s open, kind of what we tend toward and is definitely a strength of our team.”

In the Phoenix recent success, these shooters have found their rhythm from beyond the arc. In its win over Northeastern, the team knocked down 10 3-pointers and 11 in the upset victory over the College of Charleston.

In its three straight victories in February, the Phoenix have outpaced its opponents in 3-point efficiency. Against Northeastern, Elon shot a season high 52.6% from three. This mark far outmatched the Huskies’ 28.6%. When the team traveled to Wilmington the team regressed but still outshot the Seahawks 22.2% to 17.6%. For the team’s upset of the season against Charleston, the Phoenix shot 39.4% from three compared to the Cougar’s 30.4%.

The core group of freshmen have performed beyond their year in 2019. In their first year playing college basketball, Woods, McIntosh and Ervin have pushed the team forward. Despite the success they have experienced, they know they still are in the learning stages of their Elon careers.

“We’re all just learning each other, how to play with each other, learning the coaches system because some of the things are different from high schools and free previous programs we came from,” Woods said.

"We are looking into the future because you know, we're going to be good, but at the same time just maximizing the season and practice getting better every day."

The freshmen understand that their time as a Phoenix goes long past this season, but they are still focused on the task ahead. With five games remaining in the regular season before the conference tournament, the team and its young core are set on finishing the year strong. The team is four wins away from topping their record last year. Woods and McIntosh are on track to pass 300 points on the season.

“We are looking into the future because you know, we’re going to be good, but at the same time just maximizing the season and practice getting better every day,” Ervin said.

The explosion of freshman talent this year bodes well for future years in the Schrage era.

“I think this year is just setting the foundation for the future. Especially having such a young core I think just coming in today, trying to get better every day and just set a foundation for success,” McIntosh said.