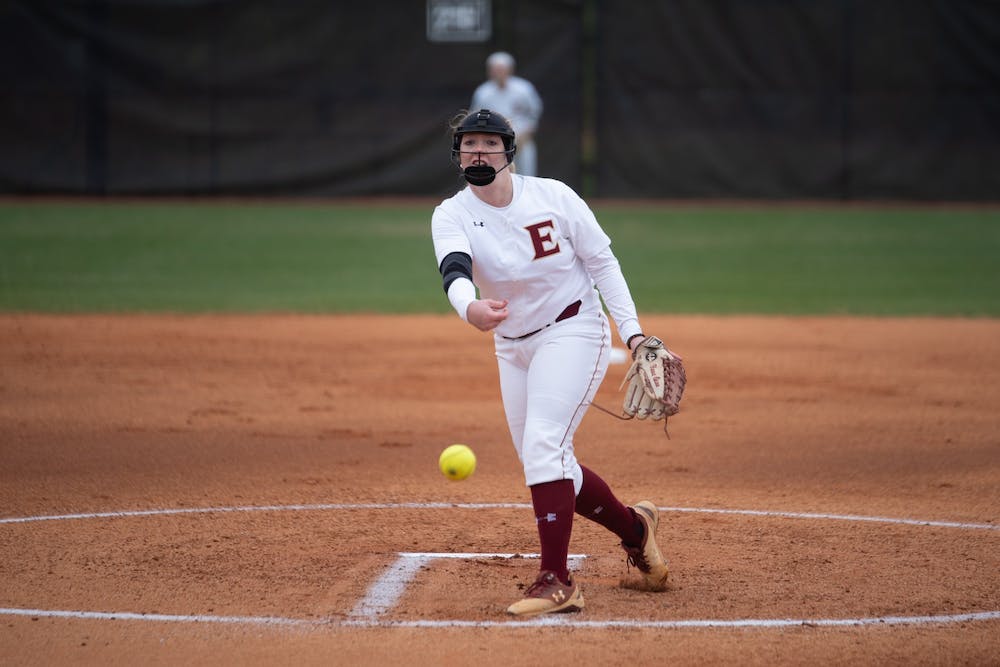 Elon University softball started the 2020 season with a double header at home. The Phoenix hosted the Elon Softball Classic after placing second in the Colonial Athletic Association Preseason Coaches’ Poll earlier this month. Elon collected its first victory of the season against the University of Rhode Island Rams, but lost in its second matchup against the Seton Hall University Pirates.

Elon took an early lead in the bottom of the first inning when freshman utility player Megan Grant scored on a wild pitch from Rhode Island pitcher Taryn Collins to make the score 1-0.

The offensive production for Elon would continue in the bottom of the second when sophomore outfielder Allie Eith made the score 3-0 on a two-run single.

Following the second inning, the Rams and Phoenix would trade zeros on the scoreboard until the bottom of the fifth when sophomore infielder Keagan Goldwait gave Elon a 4-0 lead on an RBI single. Goldwait’s single would prove to be the end of the day for Collins.

Senior pitcher Kenna Quinn pitched a gem to propel the Phoenix to a 5-0 victory. Quinn stifled the Rams’ offense. Her toughest test came in the top of the sixth inning, when Rhode Island had runners on first and second, but a double play got the Phoenix out of the jam. Quinn struck out eight hitters en route to a four-hit, complete-game shutout.

Quinn said the team energy played a role in her performance.

“Everybody was excited, we had a lot of energy coming in,” Quinn said. “So that definitely made my job a lot easier.”

As far as her mentality, Quinn says she stays focused on the task at hand.

“I don't really think about what's going to happen the next game or really the next inning. I try to focus on that pitch, that batter, that inning,” Quinn said. “And I know that if something happens, my team does have my back, and the pitching coaches will do whatever’s best for us.”

Elon’s hot offense continued into game two against Seton Hall. The Phoenix jumped out to a 2-0 lead against the Pirates thanks to a two-run double from Goldwait.

The early lead did not hold up, and the Phoenix pitching staff struggled, while the Pirates attacked. The Seton Hall offense scored seven runs, and Elon softball head coach Kathy Bocock went to the bullpen in the middle of the inning. When the dust settled on the second, Elon’s starting pitcher, freshman Kaitlin King, was charged with six earned runs.

Elon put a sizeable dent into the Pirates’ lead in the following inning. After scoring four runs, Elon cut the Seton Hall lead to 7-6.  However, the Phoenix offense fell silent after the second inning as Seton Hall continued to add to its lead as the game progressed, with the Pirates winning 17-6 in six innings.

After the game, Bocock said she was happy with the offensive production in the doubleheader, but emphasized defense as something the team needs to improve on going forward.

“We can score 11 runs in two games, we should be able to win those games, but we gotta play defense. We gotta make plays so it makes it easier on the pitchers,” Bocock said. “I think our defense behind them, didn't do what we needed them to do tonight so I think it's the defensive side. Not the pitching, not the hitting, we gotta get better defensively.”

The Phoenix will take the field again on Sunday to complete the Elon Softball Classic. The team will play in a doubleheader against Longwood University. The first pitch of game one is scheduled for 2 p.m.