Holocaust survivors share their stories with the Elon community

Robert and Agnes Heller reflect on their survival experiences 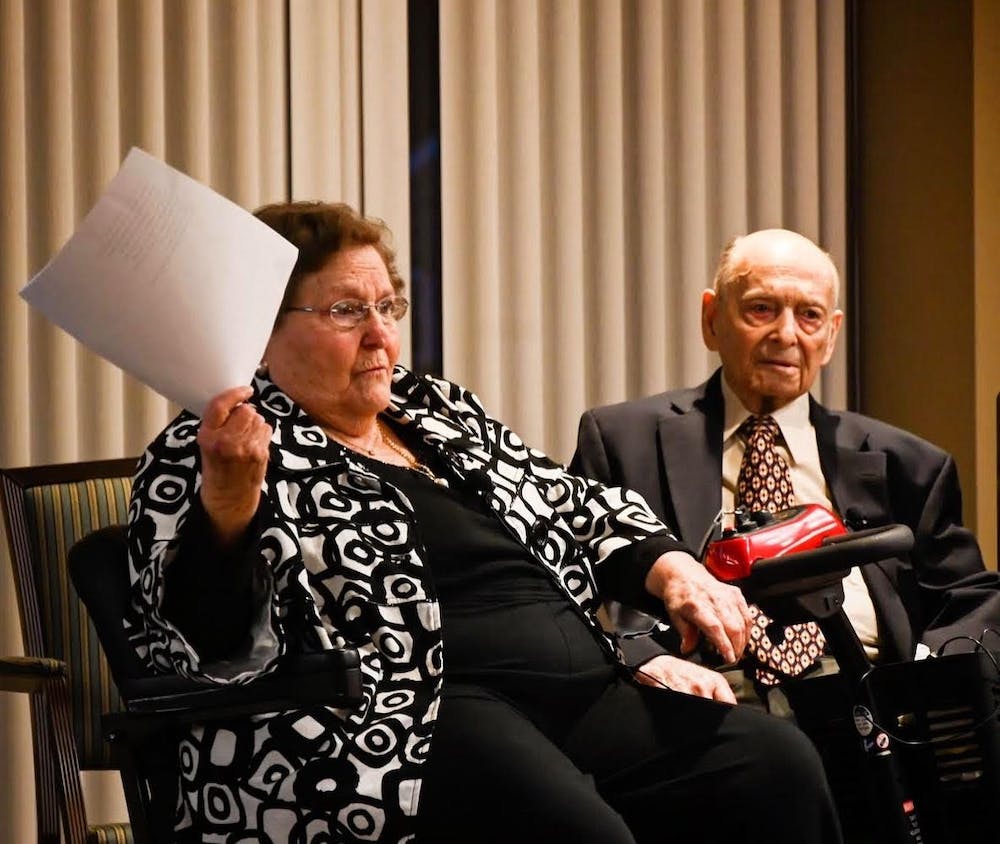 
Agnes and Robert Heller speak to the Elon University community on their stories of surviving the Holocaust in McKinnon Hall on Feb. 13th.

Holocaust Survivors Robert and Agnes Heller visited Elon University last night to share their stories of love, loss and survival on an auspicious day for Robert. Thursday, Feb. 13 marked the 75 year anniversary of being reunited with his mother and sister in 1945 after years of hardship.

Robert, 92, grew up in the suburbs of Budapest, Hungary, with his loving family. When the German Nazis invaded his native country, Robert’s father became a slave laborer, forced dig ditches and hang traps at the Soviet border. Only three of his fellow prisoners were found alive in 1946.

“A ghetto was established in the middle of Budapest, and gradually, the Jews were marched into the ghetto, out of these Jewish houses,” Robert said. “When my mother realized that this was going to happen, she decided that we must go into hiding.”

One of Robert’s family’s employees provided them with forged Christian documents. The Sisters of Mercy convent took his sister in as a novice, his mother as a cook, and him as a handyman. But this refuge was short-lived. The nuns decided that keeping a young man in the convent was too much of a risk, leaving Robert to fend for himself.

Robert found safety at an estate protected by the Swedish government. The residents were mostly displaced children, with the exception of the estate's adult caretakers. But it wasn’t long before the Germans invaded similar safe houses nearby.

“The adult couple was scared, and during the night they disappeared," Robert said. "I was left in charge at the age of 16 of approximately 100 children."

On his way back to the safe house from collecting food one day, Robert was mistaken for a Hungarian by a group of Russian soldiers. Robert convinced them that he was a Jew, and led them back to the half-starved children at the estate.

The soldiers cared for the children, and sent a white flag to the German command, asking them to surrender. When the Germans denied that request, the Russians shot 72 German and Hungarian prisoners of war in the backyard of the safe house.

“They left the 72 bodies there for the children and myself to try to bury," Robert said. "We found a dry well on the premises, and we just dropped the bodies in there.”

Agnes was only 10 years old when the Germans invaded Hungary. She was having her hair done at a beauty parlor when she heard airplanes overhead – signaling the start of the Nazi invasion of Budapest.

Agnes’ family turned to their Swedish contacts for help. Facing the threat of deportation, Agnes’ parents placed their daughter in the care of a Swedish family.

“One night – I guess I must be an insomniac already from that time – I couldn't sleep, and I went to the kitchen for a glass of milk,” Agnes said. “I heard a few people in there talking, and low and behold, it was my mother and father. I didn't know they were there. They had been hiding in a pantry, with a coat rack to cover the entrance. They were there all day and came out at night to get fresh air and exercise.”

The family was given 24 hours to leave the estate. This time, Agnes’ parents left her with Gyula Halmi and his wife. Although her parents never returned, the Halmis cared for Agnes as if she were their own.

Halmi received the “Righteous Among The Nations” award from Yad Vashem in 2002.

Robert and Agnes immigrated to the U.S. in 1948. They met at a youth gathering hosted by the Hungarian FreeMasons' Club in 1952, and were married in 1954. They now have two sons, Jim and Tom.

Decades after arriving in the U.S., Agnes discovered a poem Halmi wrote for her on March 8, 1945.

“Once there was a little girl, smaller than a kernel, landed on our doorstep, leaving the inferno,” it read. “We became her parents, with her we shared our hope, we did not wish to leave her to danger all alone. She filled our lives with sunshine, and opened up her heart, she earned our instant love, and we wished she'd never part.”

The Hellers’ speeches were co-sponsored by many campus organizations, including Elon Hillel, Chabad Elon, and the Truitt Center.

The crowd of students, faculty, and community members exceeded McKinnon Hall’s seating capacity. Melissa Denish, co-religious educational chair at Hillel, was happy to see so many people in the audience.

“There's survivors all among us,” Denish said. “We need to continue this education for as long as we can.”

Betsy Polk, Elon director of Jewish life, hopes the audience came away with a sense of community.

“Tonight's event is important because these are stories that are a part of our history, our shared history, that we're not going to get to hear for much longer from those who experienced it,” Polk said. “The only way we're going to prevent these things from happening – the incidents of hatred and chapters of genocide in our history – is to stand together.”