The Phoenix lose first weekend game of the season 3-0 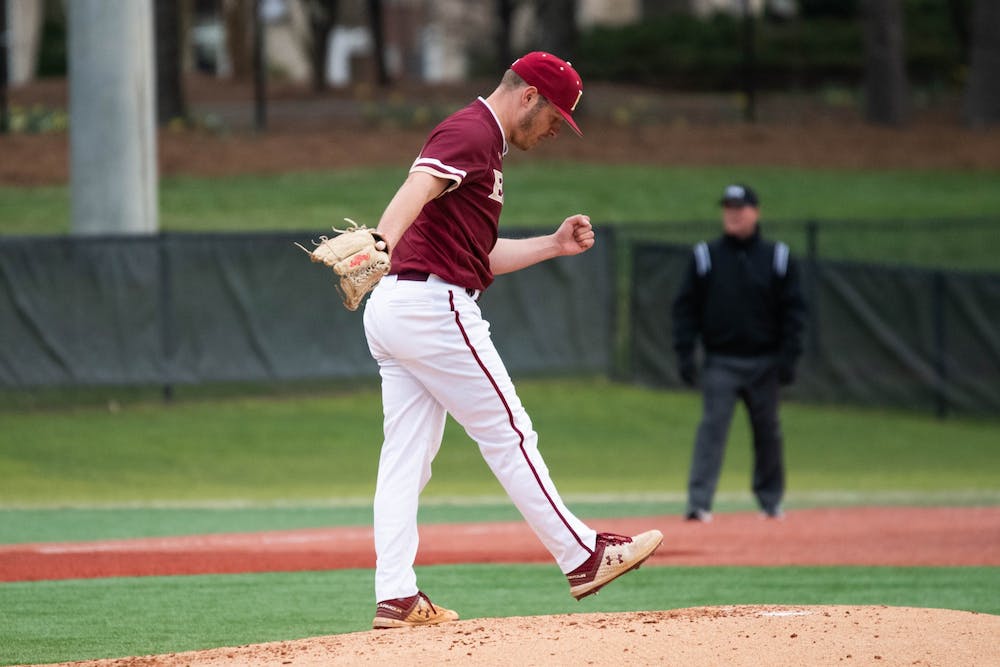 Elon starting pitcher Jared Wetherbee celebrates to himself after a strikeout in the fourth inning against Indiana State on February 28. Wetherbee gave up one earned run in 4 1/3rds innings.

The starting pitchers for the Elon and Indiana State were stingy early in Game One of the three-game series.

Junior pitcher Jared Wetherbee walked four Sycamore hitters but was still able to put up zeroes on the scoreboard through the first four innings.

Indiana State eventually found its way on the scoreboard in the top of the fifth inning thanks to an RBI double from junior designated hitter Brian Fuentes, giving the Sycamores a 1-0 lead. That run proved to be the end of the day for the left-handed pitcher, and he finished with five strikeouts and allowed one earned run on four hits in just over four innings.

Sophomore pitcher Kyle Greenler came into the game after Wetherbee and was able to pitch four solid innings out of the bullpen. Wetherbee complimented the pitching staff’s performance, but he also said he needed to get better.

“The staff as a whole, we still competed our butts off,” Wetherbee said. “I've got to be better. I've got to go deeper into the game and I got to command it a little bit better.”

In the sixth, a throwing error from Greenler put a runner on second, and that runner went on to score on an RBI single from junior shortstop Jordan Schaffer to make the game 2-0.

Following the team’s third loss of the season, Elon head coach Mike Kennedy stressed the importance of keeping mistakes to a minimum in tight games.

“I'm trying to tell our guys right now, those type of mistakes, you know, when you're not hitting, boy, it's challenging for our pitchers because they're having to hang on every pitch,” Kennedy said.

Indiana State pushed across its third run in the eighth inning and finished the night with 11 hits against Elon. Wetherbee talked about the scrappiness of the Sycamores after the game.

Redshirt junior Tristan Weaver was nearly untouchable in his third start of the season. Through seven innings, Weaver shut out the Phoenix offense to the tune of 12 strikeouts, allowing only three hits during that stretch.

The Phoenix will take the field again for Game Two against the Sycamores Saturday, with first pitch scheduled for 2 p.m.