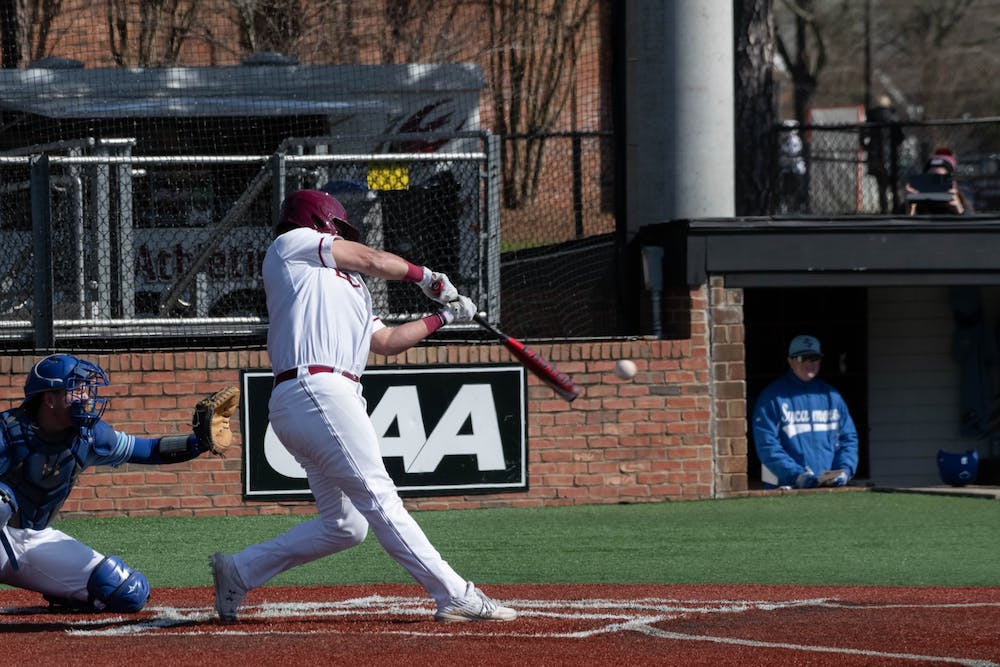 After being shut out the previous night, Elon University baseball (6-4) put up six runs against Indiana State University (4-5) on Saturday, but it was not enough to beat the Sycamores. Elon lost its third straight game by a final score of 9-6.

After failing to score the previous night, the Phoenix did not waste any time on Saturday. Elon quickly went up 2-0 in the bottom of the first inning, with one of those runs coming off a hard-hit RBI double from freshman first baseman J.P. Sponseller.

Elon’s lead would not hold up, and the Sycamores’ offense was unstoppable early on.

Indiana State put eight runs on the board early thanks to five runs in the top of third and three in top of the fourth. The Phoenix eventually found themselves staring at an 8-4 deficit after four innings.

Elon head coach Mike Kennedy said the team remained positive throughout the game, but he also said allowing opponents to put together big innings can have a negative impact on the offense.

“After that five-run third [inning], you really need a zero,” Kennedy said. “We didn’t do that. We put up a three, and you know, when you’re struggling a little bit offensively, it takes a little bit of the air out of your sails.”

Elon freshman pitcher Spencer Bauer went only three innings, and allowed five runs in Saturday’s contest. Kennedy and the trainer paid Bauer a visit on the mound during the third, but decided to let him finish the inning.

At this point, Kennedy said he was unsure of what was ailing Bauer, but he was confident that he will return to form once he is back to full strength.

Elon did not go down without a fight. The Phoenix was able to scratch two more runs across the board in the bottom of the seventh inning to cut the Sycamore lead to 9-6. However, those would be the final runs scored in the game, and Elon’s offense would fall silent the final two innings.

After the game, junior infielder/pitcher Jack Roberts said that despite not being able to come away with the victory Saturday, he likes the direction of the team heading into Sunday.

“We’re in the right direction. We’re on a good path right now and I think we’re getting closer to where we want to be,” Roberts said.

The final game of the three-game series against Indiana State is scheduled for Sunday, March 1 at Latham Park at 12 p.m.