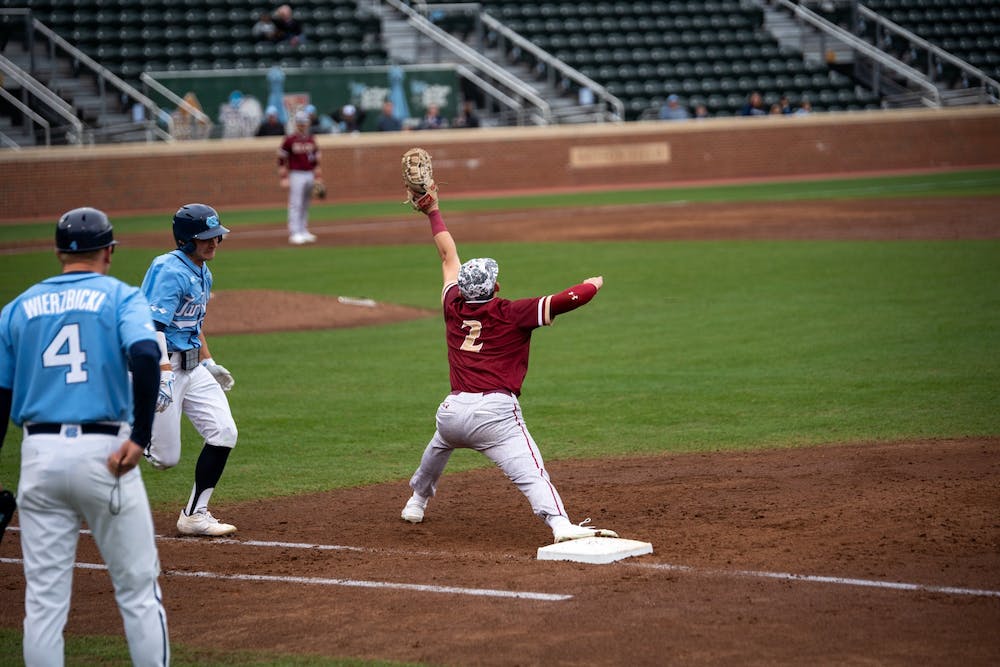 
Elon University senior infielder Joe Satterfield stretches for the ball to get the University of North Carolina Tarheel runner out at first base in their game at UNC in Boshamer Stadium on Tuesday, Feb. 18. The Phoenix lost to the Tarheels 7-1.

CHAPEL HILL, N.C. — After completing a three-game sweep of Delaware State University at home on opening weekend, Elon University baseball took on No. 13 ranked University of North Carolina at Chapel Hill at Boshamer Stadium in Chapel Hill on Tuesday. The Phoenix (3-1) fell to the Tar Heels (4-0), with a final score of 7-1.

Chapel Hill was off and running early in the game with a four-run second inning against freshman pitcher Ian Evans. Elon was able to score its first run in the top of the third inning to make the score 4-1, with the Tar Heels in the lead.

After UNC scored again in the bottom of the fourth inning to make the score 5-1, both teams settled down and began to trade zeroes on the scoreboard for three innings.

Sophomore pitcher Kyle Greenler was able to enter the game in the fifth inning and provide the Phoenix with three shutout innings to keep the game within striking distance. After the game, Greenler talked about his mentality coming out of the bullpen.

“Throwing up zeroes. That’s my job out of the pen,” Greenler said. “First pitch strikes, get ahead in the count, give us a chance to come back in and do some damage.”

Greenler entered the game with the Phoenix down 5-1, and head coach Mike Kennedy said the game never felt out of reach.

“Five to one, you're in a ball game. You're not out of the ballgame and we felt like our pitching kept us in it the whole time,” Kennedy said.

The Tar Heels put up two more runs in the bottom of the eighth inning thanks to a double from freshman catcher Eric Grintz. Those runs proved to be the final runs of the game, and UNC Chapel Hill secured the victory.

This is one of four games that Elon will play against the Atlantic Coastal Conference (ACC) this season. The Phoenix will still have to face off against Wake Forest University and North Carolina State University. Senior infielder Adam Spurlin said he valued facing this type of competition, and that the team needs to avoid strikeouts in order to get back in the win column.

“I think that was the biggest way takeaway from today’s game, which is, we gotta cut down on the strikeouts,” Spurlin said. “Not gonna win many ballgames doing that.”

The team will be back at home this weekend, with a three-game series against the University of Massachusetts Lowell starting on Friday, Feb. 21 at Latham Park. The first pitch of Friday’s game is scheduled for 3 p.m.