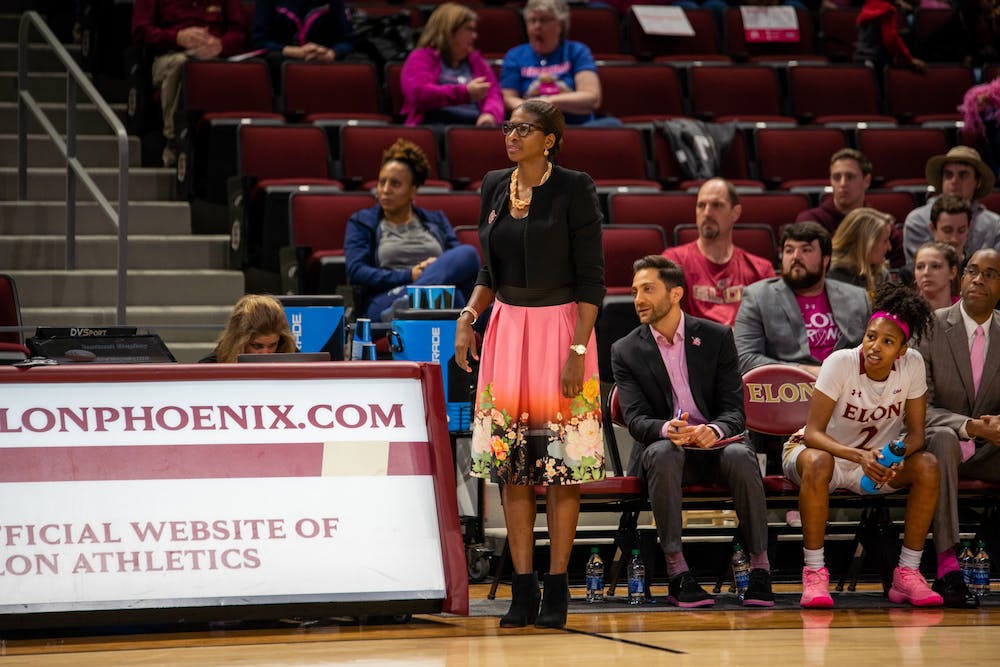 For the last nine years, Smith has been the head coach for Elon University’s women’s basketball team. This spring, President Connie Book released “Boldly Elon,” the university’s next strategic plan. One of its focuses is bringing more diversity to campus.

Smith is top-five all-time in scoring at UNC Chapel Hill. She is also just one of two UNC women's basketball players to have her jersey retired.

Smith is the only black head coach in Elon’s athletic department. She is also one of four female head coaches of the 16 sports recognized by Elon Athletics.

Smith said it is still important for aspiring female African American athletes to have the opportunity to lead. She said it can help athletes dream as she did, and achieve seemingly unachievable goals.

“Sometimes, if you don’t see it, you can’t imagine it,” Smith said. “We’re probably one of the conferences that have a greater representation of African American head coaches. The representation is important in terms of people understanding that the opportunity is there.”

Smith encourages her team to take every opportunity they have at Elon.

“I feel like it’s my responsibility as an African American coach to first and foremost help my African American players understand the privilege that it is to be able to play at Elon University,” Smith said. “I told them one day in practice, I said, ‘Look around the room’. They just all look and you know, it’s their normal. It’s good that we’re at a point to where it is their normal. But we can’t forget where we’ve come from.”

Smith said she wishes the world could be like her team and not have color or race impact the way people treat each other. She said the “harsh reality” is that equality for all is still not the case, but she will continue to play her part in making that dream a reality one day.

“One of the things I try to do as an African American coach is to help all of our players understand what a privilege it is to be in this position,” Smith said.

Smith said she can’t be sure of the effect she makes on her players. However, influencing her players is something she said she keeps in mind.

Smith said when the day comes for her to move on, and she looks back on her time as a coach at Elon, simply being a coach won’t be what she remembers.

“If I don’t feel like I’m making an impact, then I feel like it’s worthless,” Smith said. “The basketball will only bounce for so long. Most probably, 99.9% of [her players] will not go on to play professionally. My impact has to extend beyond the court.”

CAA tournament championships have been won under Smith's leadership. She led the Phoenix to victory during the 2016-17 and 2017-18 season.

Smith compared the maturation process of her players to the tradition of students receiving an acorn at convocation and a sapling at graduation.

She said she feels she is responsible for helping those acorns become saplings.

Smith said she is looking forward to the rest of the year and hopes to see her team in the conference tournament, which will be hosted by Elon this year.

“That would be a great wrap up to this season,” Smith said. “The icing on the cake would be hosting an outstanding conference tournament and hopefully winning another championship to make this university and our Elon women’s alumni proud.”