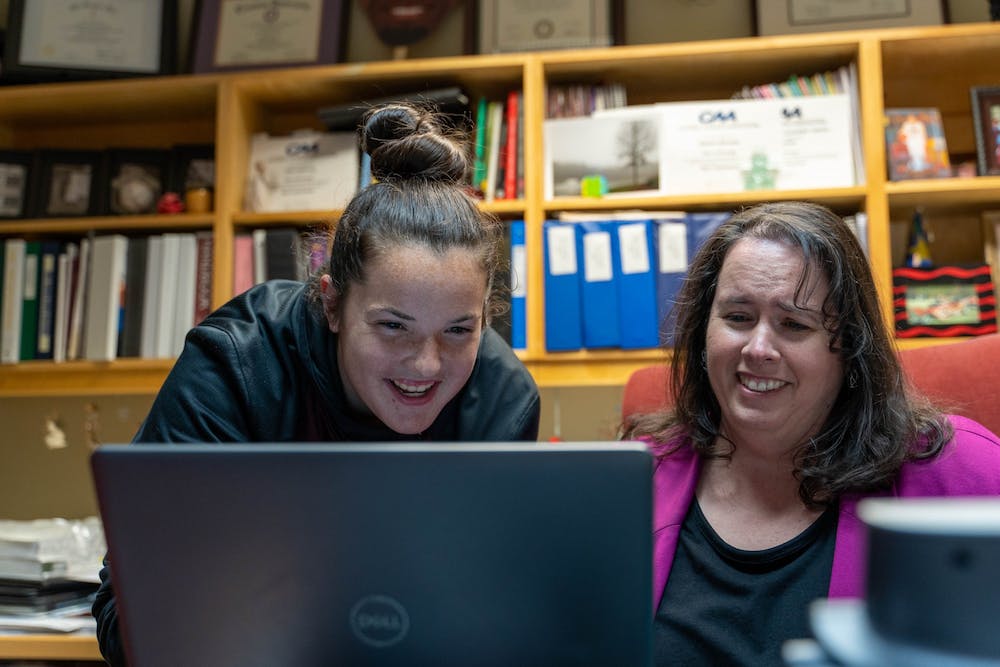 Photo by Clare Grant | Elon News Network
Cayce Crenshaw who is the Assistant Athletic Director for Academic Support advises Skylar Barthelmes who is a thrower on the track and field team in Alumni Gym Wednesday Feb. 12.

Every day, Elon University athletes shuffle through the doors of Alumni Gym. They take a right down the hallway with a sign on the wall that reads, “Academic Support for Athletics.” At the end of the hallway is a pod of offices where athletes and advisers meet to discuss everything from class schedules to life goals.

This is where Cayce Crenshaw works.

In her office, tucked in a corner and smaller than the average Elon dorm room, Crenshaw advises the men’s basketball team and the quarterbacks on the football team. She normally meets with players individually to chat about everything from classes to long-term plans. She even enjoys chatting about their lives in general. By doing this, Crenshaw says she can cater to their specific strengths and set personalized expectations.

“We want everybody to work to their potential. So, if you have the ability to be a 3.5 [GPA] student, we want you to be a 3.5 student,” Crenshaw said. “We don’t want you settling for a B when you can get an A.”

The Graduation Success Rate measures the percent of a team that is expected to graduate in a six year timeline. The NCAA uses this rate to gauge long-term academic success. Elon’s men’s basketball, which has a cumulative 3.1 GPA, graduated 100% of its players within the six-year timeline in 2019.

is the cumulative GPA of Elon University's men's basketball team.

Similar to a coach, Crenshaw said she encourages her advisees to do the best they can. This is particularly true for freshmen athletes. Crenshaw said academic advisers focus a lot of attention on them so they start their college experience on the right track.

The freshmen basketball players have established their leadership on the court. Freshmen Hunter McIntosh, Hunter Woods and Zac Ervin have played more than any freshman on the team. They are among the team’s top scorers — individually, all three have scored over 200 points this season.

While head coach Mike Schrage supports them on the court, Crenshaw steers them toward academic success.

is the number of games played on the road by Elon University's men's basketball.

“She challenges me and pushes me to excel in the classroom, she always gives me the extra push,” Woods said. “It’s tough love — like a mom — it’s going to be stuff you don’t want to hear, but at the end of day, it’s only going to make you better as a person.”

Crenshaw’s unique brand of “tough love” can take many forms, from yelling, to constant texts, to email reminders or even a stray cuss word. Many players respect the effort Crenshaw puts in for them and acknowledge that her methods keep them in check.

“There’s also a certain fear aspect; one of us is skipping class or doing any of that because you know that she’s gonna find out and you know, she’s gonna tell coach,” Ervin said. “But [we have] respect for her because she does put in a lot of time for us to make us better.”

While underclassmen get the most attention from advisers, Crenshaw also works with graduate student transfers who pose nuanced challenges.

Graduate guard Marcus Sheffield II spent his four years of undergrad at Stanford University. Sheffield II transferred to Elon to play out his last year of eligibility and pursue a master’s degree in business administration. Crenshaw said the challenge is she didn’t have four years to get to know Sheffield II.

By traveling with the team, Crenshaw was able to get to know Sheffield II more. She got to talk to him about his professional basketball aspirations and how he is adjusting to Elon. Now, as the season comes to a close, she has formed a relationship with the otherwise stoic superstar.

“We do have that relationship where we can talk and joke and talk about how classes are going and what kinds of things he’s learning … and ‘do you like it’ and being able to have those conversations just like you would with an undergraduate student,” Crenshaw said. “So, you develop that even though it’s only for a year.”

At other schools across the country, people in Crenshaw’s position are referred to as academic coaches. However, she wouldn’t describe herself as one.

“It’s a mix between a coach, between a mom between a big sister,” Crenshaw said. “I’m not just telling you what to do, but trying to give you good advice.”

Crenshaw makes herself available for all her athletes no matter their schedule. According to McIntosh, Crenshaw can even be found in her office until 11 p.m. Her efforts aren’t lost on freshmen standouts.

“She’s really just a good, kind of motherly figure for us coming into college. It’s definitely good to have her not just as an academic contact but [as] somebody you could talk to as a regular person,” McIntosh said.

One of the harder transitions for younger student-athletes, especially basketball players, is the amount of travel. The men’s basketball team is playing 31 games and a conference tournament this season. Fifteen of those games are played on the road.

Over nine days in November, the team traveled from Elon to Atlanta to Ann Arbor, Michigan to Chapel Hill, NC.

“It can be overwhelming when you’re [in Elon] and suddenly you’re in Philly and ‘Oh, wait, I forgot to do something that I was supposed to do,’” Crenshaw said. “We can try to help them stay organized. We want to do that, but ultimately it’s going to be the students’ responsibility, and we’re there as just an added bonus.”

We want everybody to work to their potential. So, if you have the ability to be a 3.5 [GPA] student, we want you to be a 3.5 student.

For nearly every game, Crenshaw can be seen courtside supporting her student-athletes from afar. When it comes to their meetings, she keeps basketball out of it. Crenshaw said she wants them to approach her at all times, even to take a break from basketball. But there is one part of their game she does care about most.

“Basketball players will joke all the time that the big thing I care about is them making free throws. I’m like, ‘Please don’t miss free throws, please don’t, like you can go practice that, you control that,” Crenshaw said with a laugh.

Crenshaw has been a part of Athletic Academic Support Services at Elon for 13 years. In this time, she has continuously seen the growth of players from convocation to graduation.

“If we’re doing this well, these are lifelong relationships,” Crenshaw said. “For me, it’s not a job — this is my life. I consider them my kids.”