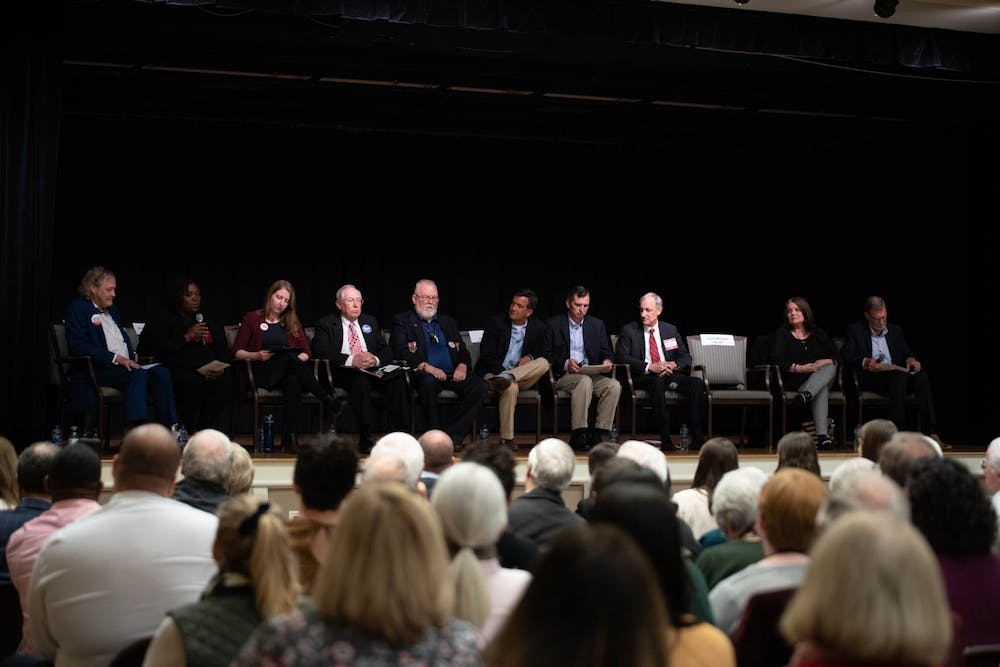 Photo by Clare Grant | Elon News Network
10 of the 12 Alamance County Commissioners appeared at the Forum in McKinnon Hall on Wednesday Feb. 5.

Ahead of the March 3 primary elections in North Carolina, candidates for Alamance County commissioners answered questions on Wednesday evening at a forum in a packed McKinnon hall at Elon University. There are 12 candidates,10 of which were present at the forum.

There are five candidates on the Democratic ballot. The Democrats include: Anthony Pierce, Bob Byrd, Dreama Caldwell, Kristen Powers and Henry Vines. Democratic voters will decide on three of these candidates.

John Paul an Alamance Community College student said that education was one of his top issues going into the election. Paul said he moved to Alamance County in 2007 and as a student has experienced the education system at all levels.

"I've been in public school all my life, being someone that went to elementary school, middle school [and] high school," he said. " I've seen where money needs to go to and where money really shouldn't go."

Watch the special report and livestream of the forum.

Barbara Encoh Daye — a Burlington resident — attended the forum to get to know the candidates had to say. Daye said that the "root cause of crime" — which she believes to be drugs, poverty and laziness — needs to be addressed.

While attendees had the opportunity to mingle with candidates no audience questions were taken. Daye said that she would have liked to ask a question concerning crime.

Daye — a Democrat — said that she would be voting for Caldwell, Powers and Byrd. She said these candidates stood out to her because of they are concerned about issues in her community.

"We have to come together as a county. I see you as human and I hope you see me as a human," Daye said. "I see everybody as human first because we all are here to do the best that we can do and to make it fair for everybody."

The deadline to register to vote in the North Carolina primary elections is Friday Feb. 7.

Baylor Rodman contributed to the reporting of this story.