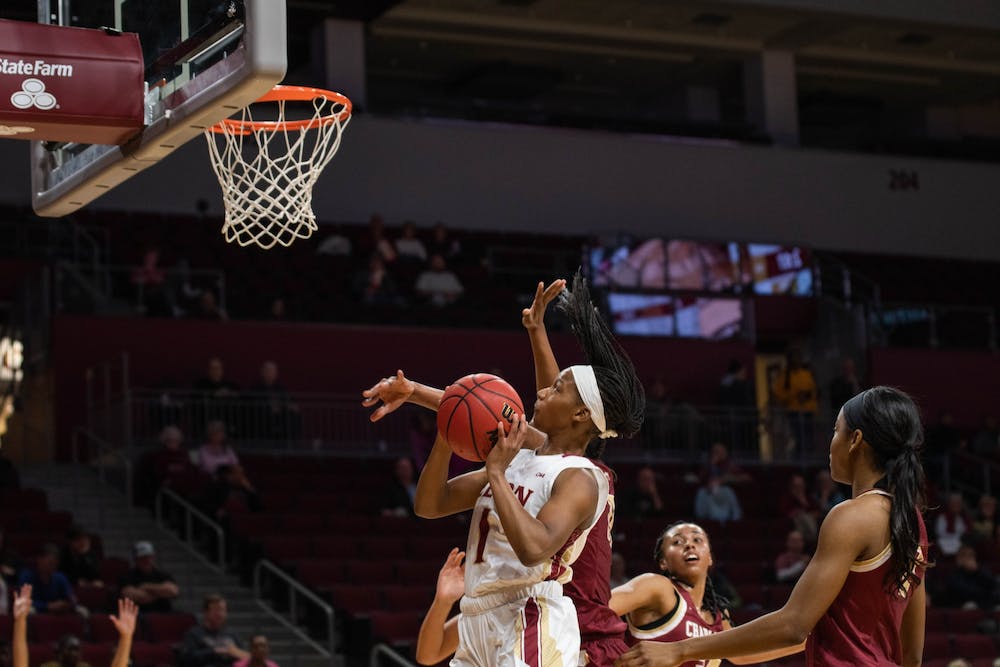 
Elon guard Jada Graves fights to the rim for a layup in the first quarter during the Phoenix's dominating victory over College of Charleston on Jan. 10 in Schar Center. Graves finished with six points and eight rebounds, and the Phoenix won 90-48.

“Well, we’re happy to be home,” head coach Charlotte Smith said. “I will say that this was an impressive win for us and a great welcome back party for our fans.”

The Phoenix led comfortably for the entire first half. The CAA second-ranked Cougars never held a lead in the first half, despite the high pressure they put on the Phoenix. The Cougars made some use of a full-court press, causing turnovers and draining the shot clock to force the Phoenix into rushed offensive possessions.

The Phoenix shook off the mistakes and made up for it in the paint. Junior Saadia Munford had her third double-digit shot count in the last four games, ending tonight's game with 12 points.

“It definitely felt good like even in warm ups,” Munford said. “Warming up in our own gym, getting hyped to our music, it just felt good shooting in our own rooms again, because we've been away for over a month.”

In the second quarter, the Phoenix shot for 75% and extended its lead to as much as 23 points in the first half. It outplayed the Cougars on defense as well, beating them on the rebounds 22-15, and forcing 12 turnovers by the end of the half.

“I knew things were going to pick up around conference time,” Munford said. “For this team to be successful, I feel like I have to be aggressive on both ends. I'm doing myself and the team disservice if I'm not looking to attack or looking to get other people open and just make plays.”

The Phoenix led at halftime 50-30, and the lead only grew in the second half.

“We talked about that at halftime, we you know, 'just pretend the score is zero to zero,'” Smith said. “The first five minutes were very important to make sure that we came out with a strong start.”

The Cougars came out just as flat in the second half, whereas the Phoenix picked up its game to drive up it's lead to 34 halfway through the third quarter, 65-31. The Phoenix was just five seconds away from shutting out the Cougars from the field in the third quarter. The Cougars’ first four points came from successful free throws when at exactly five seconds, Cougar senior Deja Ford made the Cougar’s first layup, and first points from the field.

The fourth quarter told the same story. The Phoenix doubled its lead over the Cougars, 81-41 with five minutes left to play, and another time 90-45 with one minute remaining. Despite doubling the Cougars on the scoreboard, Smith was still pushing her team to be the best.

“I said ‘it's us against perfection’,” Smith said. “They locked in defensively, that's the biggest thing is just, you know, when you get a lead like that, sometimes you can become lackadaisical on defense, so just encouraging them to stay committed to our defensive effort.”

The Phoenix closed out an otherwise uneventful fourth quarter, sealing the victory, 90-48. The Phoenix served the Cougars it's first conference loss and was awarded its first home conference win this season.

The Phoenix next play against University of North Carolina Wilmington Seahawks (4-9, 1-1 CAA) Sunday at 2 p.m.