Finishing touches still not there for the Phoenix 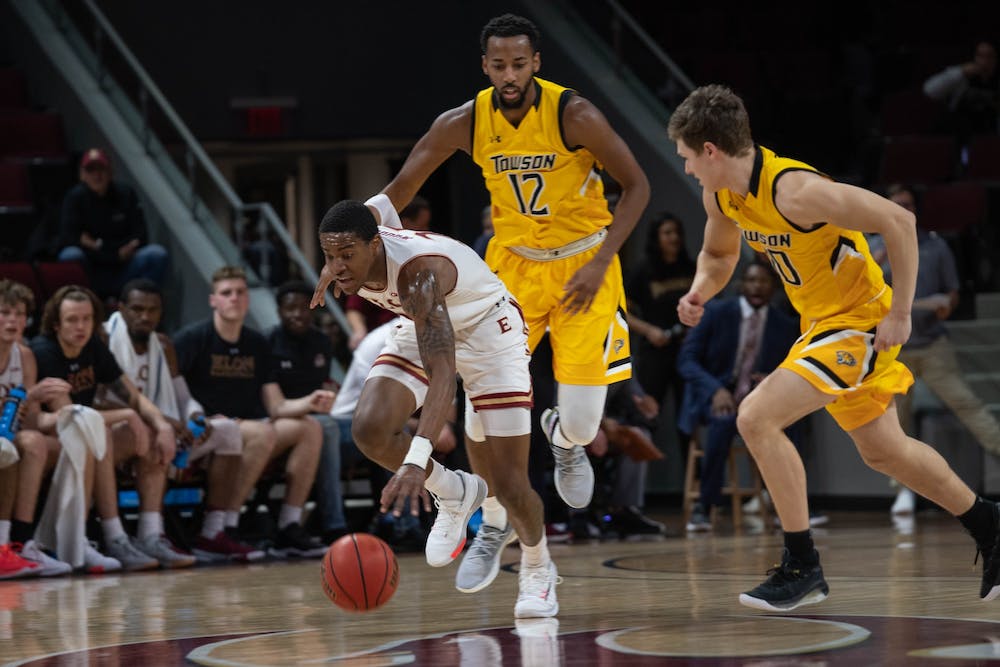 Photo by Thomas Denome | Elon News Network
Elon guard/forward Hunter Woods corrals the ball after a steal in transition against the Towson Tigers on January 23 in Schar Center. Woods banked 15 points in the Phoenix's 72-61 loss.

“I mean we got to learn how to win,” head coach Mike Schrage said. “We put ourselves in positions late as we have pretty much every game. We gotta learn how to break through and finish it out.”

The middle of the standings Tigers came out slow, allowing the Phoenix to take an early lead of 11-5. Junior forward Simon Wright got his first minutes in two games, getting some points on the board upon checking in.

The changes to the lineup didn’t help the Phoenix tackle the eventual fury of the Tigers once the team woke up and pushed back. Knocking down 15 points in a row, the Tigers surged ahead of the Phoenix and took the lead 22-14.

“They hit some threes, they're shooting the ball better than they had early in the year,” Schrage said. “We are very much a three-point shooting team right now, but those guys hit shots and ours don't down the stretch.”

Freshman forward Zach Ervin finally broke the scoreless streak for the Phoenix with a confident three, giving the Phoenix a little bit of its early stride back. The Phoenix would end the half ahead by a basket, 28-26.

The second half started in a similar fashion to the end of the first half. Play reached a heated moment when an accidental swing by sophomore forward Federico Poser made contact with Tiger leading rebounder redshirt-senior forward Nakye Sanders. Sanders was ushered off the court by a teammate with clenched fists, and Poser was given his first technical.

An otherwise uneventful half full of back-and-forth play, came to a critical point at four minutes left in the first half when the Tigers put down eight in a row to push itself ahead 59-53. Head coach Mike Schrage called a timeout to try to reset his team, but the Tigers won the timeout break with an easy three by Tiger top scorer senior forward Brian Fobbs. The Phoenix suddenly found itself behind 62-53.

“We can’t seem to put 40 minutes together, or put a full game together," freshman forward Hunter Woods said. “They're a good team and they’re experienced, so I give them credit, they played well. We just got to go back to practice you know, figure out some of our troubles and just keep getting better. Somethings gotta give, we gotta put together a full 40 minutes.”

The Phoenix could've used one of those answers to its troubles to fight the Tiger’s energy. With 30 seconds left, the Phoenix would intentionally foul to stop the clock, driving up the Tiger lead even more. The game would end in Tiger favor, it's last 10 points coming solely from the free-throw line.

“At the end of the day, they scored 28 points in the last six minutes. Now granted, some of those were us fouling, but still, like, come on when it's crunch time..." Schrage said. "I just thought we had some tired eyes out there tonight."

“We gotta learn,” Schrage said. “we get those last five minutes a lot and we got to break through and learn what it takes to win in those moments.”