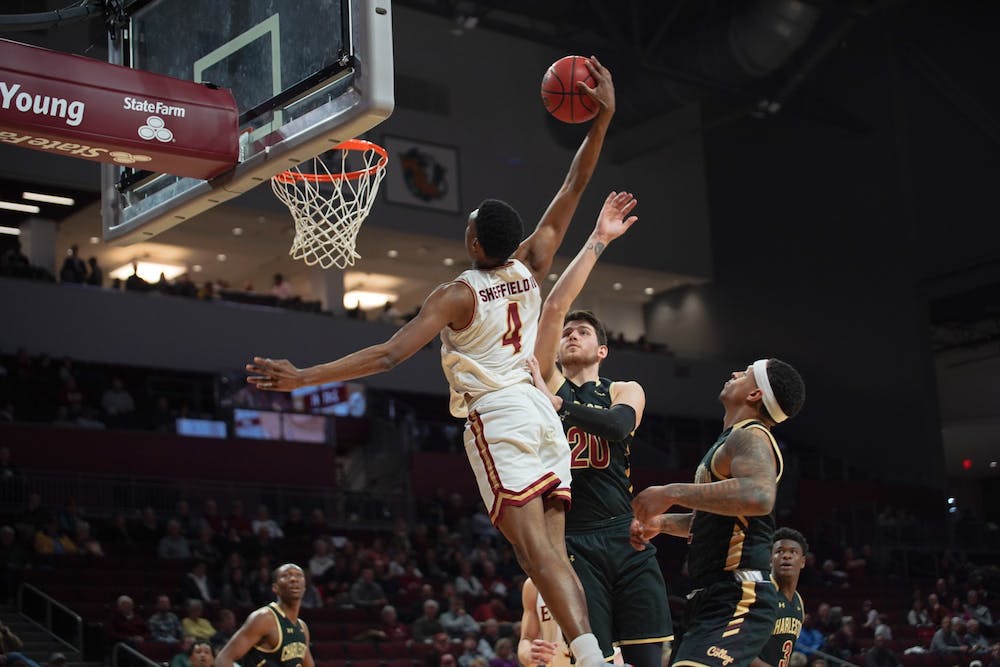 College of Charleston has a solid program behind it, but the man on the Phoenix's mind was senior Grant Riller.

Despite the big man on campus, the Phoenix kept it's cool for the beginning of the first half. The Cougars sank the first basket of the game, but would not regain the lead until the seventh minute. The largest Elon lead came at the 15-minute mark where they led 13-4. The defense also managed to keep Riller quiet, holding him to just nine points at the end of the first half.

“He's efficient,” head coach Mike Schrage of Riller. “He's got such body control. He gets so low, and with his combination of speed and quickness, with strength is unique, especially at our level. Once he beats you with the dribble, I mean, it's tough.”

The Phoenix ended the second half with a tight lead of 38-36. Grad transfer Marcus Sheffield II dominated the board as usual with nine points, but junior Simon Wright also made much-needed noise for the Phoenix. Wright came up big defensively with six rebounds, five of them defensive.

Despite being up at half, Schrage was still expecting more from his team.

“I didn't think we played our best. I certainly don't think they played their best but I thought we should have been up much more than two points at the half,” Schrage said.

The Cougars came out in the second half fast and furious. An initial three by Wright pushed the Phoenix lead to 41-36, but it wouldn’t stay there for long. Riller made a three and two free throws to get the game tied up. The second half was a fairly consistent back-and-forth battle, with neither team gaining much momentum without an answer from the other.

The Cougars always seemed to have those extra few points on the Phoenix, even though they cut down the lead a few times during the remainder of the half. Schrage said he was proud of his defense for holding them but, again, he wanted them to do better.

“They pressured a little bit more than the first three teams we played,” Schrage said “I thought that bothered us...that bothered me that that bothered us because we've seen enough pressure, maybe it hasn't been these three opponents to start colonial play, but as much better earlier in the season.”

With three minutes left to play in the game, Riller went on cruise control and wouldn’t stop for the rest of the game. Making up 12 points in the last stretch of the game, he dug the final hole for the otherwise solid Phoenix. The Phoenix kept chipping, closing the lead to four with less than a minute to play. However, the Phoenix couldn’t find those final touches that would’ve pushed them ahead, airballing three in down the stretch.

“Riller made some big plays at the end,” Wright said. “It’s a great experience for us though. We've got a young group of guys and just showing them what it takes in this conference is good for us.”

The Phoenix continues to look for its first CAA victory and will look to do so against University of North Carolina Wilmington Seahawks (5-12, ), who notched their first conference win on Thursday. Tip-off is at Schar Center on Jan. 11 at 4 p.m.