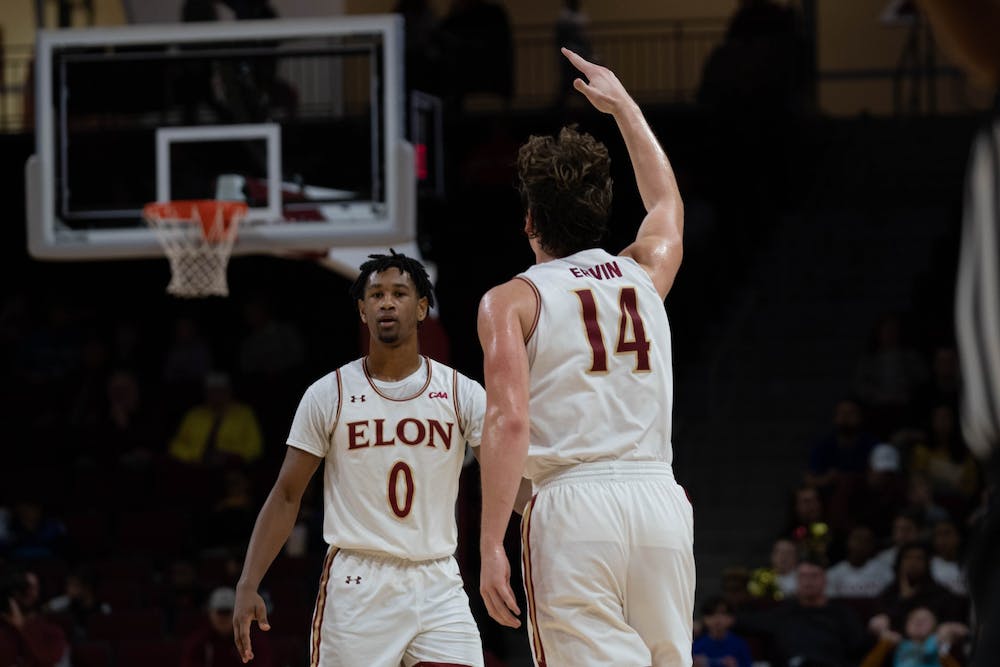 
Elon guard/forward Zac Ervin gestures toward the Elon bench after drilling a three against UNCW on Jan. 11 in Schar Center. Ervin had a torrid first half, finishing the game with 27 points on 9-14 shooting. The Phoenix won 80-63.

The Phoenix came out strong and fast to match the Seahawks intensity, who started out with a full-court press right off the bat. The Phoenix was able to break it and jump out with a deep three from freshman guard Zac Ervin, which would spark a great night for him.

Ervin would hit three three-pointers within the first five minutes to give the Phoenix a quick 10-7 lead against the Seahawks.

“We have a lot of good shooters,” Ervin said. “Coach believes in everybody shooting the ball on our team”

With less than three minutes in the first half, the Phoenix lost the lead to the Seahawks with a score of 31-27. The Phoenix couldn’t get the lead back before halftime and would trail 38-33. Ervin led with 16 points, just one point shy of his season best of 17.

With five minutes left to play, the Phoenix would increase its lead to 20 points. Zac Ervin still had his foot on the gas, climbing up to his game total of 27 points.

The rest of the Phoenix continued that momentum and would claim its first CAA win.

“We came out and executed much better and defended. I mean that’s who we gotta be,” head coach Mike Schrage said.

The Phoenix next game will be against Drexel University (10-8, 3-2 CAA) on Jan. 16 in Philadelphia, Pennsylvania.