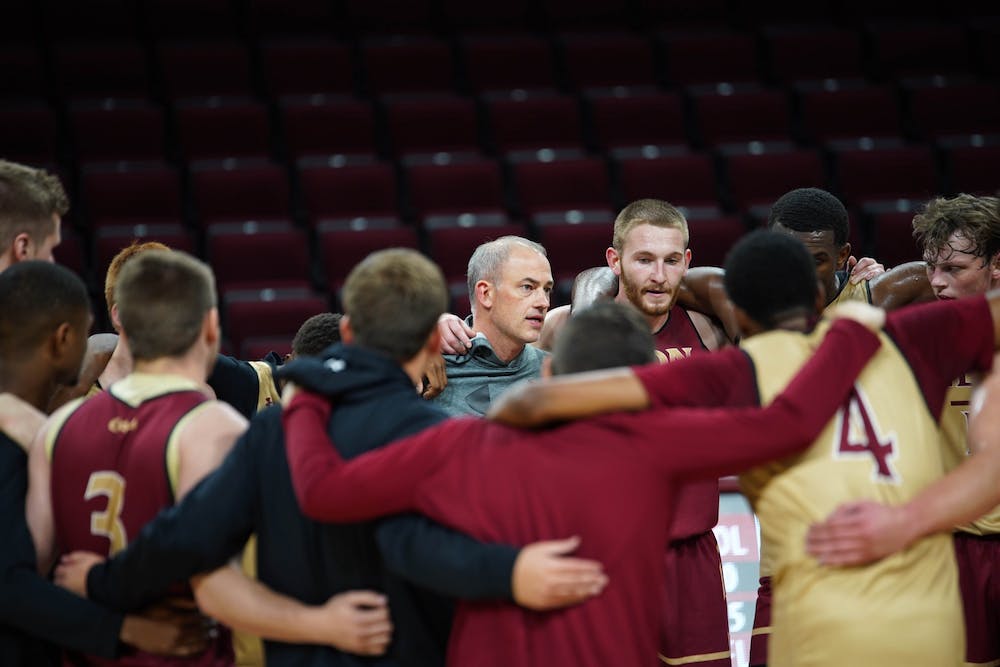 Photo by Clare Grant | Elon News Network
Men's basketball coach Mike Schrage makes the game plan during their practice in Schar Center on Monday, Nov. 18 for their next away game against UNC.

The Elon men’s basketball team has had its fair share of ups and downs over the past year, ending last season with an 11-21 record and currently holding a losing record this season. First-year head coach Mike Schrage came in ready to take on the challenges this year poses.

Schrage has talked about how he wants to create not just good players but good people.

Schrage and the Phoenix have been creating a foundation for a successful program all season. With the majority of the team being underclassmen, Schrage has relied on young players.

Freshman guard Hunter McIntosh has stepped up for Elon. Averaging 10 points per game, he’s become the second-best shooter on the team. The No. 1 spot is filled by the most experienced player on the team, graduate student guard Marcus Sheffield II. The transfer student from Stanford averages 16 points and five rebounds per game.

But the returning players don’t go unnoticed either. Junior forward Simon Wright went from not starting last year to regularly starting and averaging seven points a game. Wright has rotated in and out of the center spot during games.

In an interview on Nov. 18, Schrage said that he’s most focused on building the program with his new staff while also building his standards and family. Even now, that motto is still one he sticks to. He said he is appreciative of the support from the student body because it helps the team come out and perform.

“I’m sure the community has gotten to know our student athletes, not just on the court but off the court,” Schrage said. “I couldn’t be more impressed with them.”

The team recently got its first CAA win against University of North Carolina Wilmington, a large first step in Schrage’s goal of being competitive in the conference.

“I knew it was gonna be tough,” Schrage said. “But, I’m proud of our guys and proud to fight with them, not just on game days, but every single day being together.”