Men's basketball pulls off its first D1 win of the year 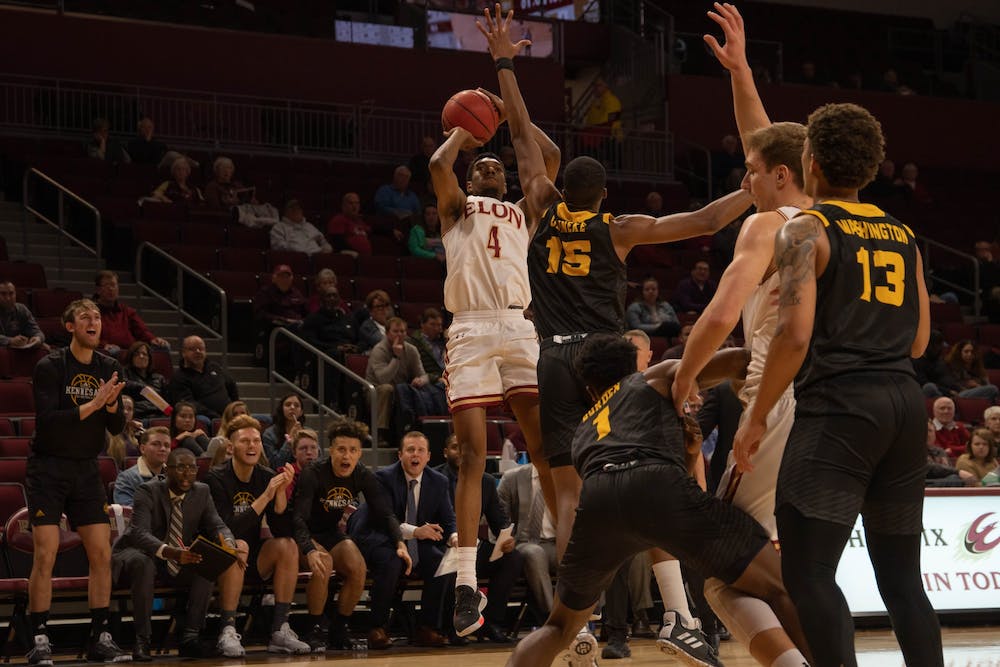 
Guard/forward Marcus Sheffield II fires off a three-pointer in a game against Kennesaw State on Dec. 2, 2019 in Schar Center. The Phoenix won 70-46.

The Elon University Phoenix (3-6) defeated the Kennesaw State University Owls (0-6) 70-46 in its first game back from Thanksgiving break. The Phoenix were hoping to break its six-game losing streak against the Owls, who have yet to win this season.

KSU came out strong with an initial full court press against the Phoenix. The high-pressure defense proved effective against the Phoenix, who couldn’t seem to get shots to fall when they needed it. This was not the case for the Owls, which halfway through the first half had made ten of its first 20 shots from the floor, whereas the Phoenix had only made three of its first 17.

“I trust Shef a lot, Shef’s not turning the ball over a whole lot,” Schrage said. “[When] both guys are in you feel like you got two guys who can really handle the ball and not get sped up a whole lot.”

McIntosh's and Sheffield’s offensive efforts did little to aid the struggling Phoenix on defense. Owl redshirt-sophomore guard Danny Lewis had an 11-point shooting streak that dug the Phoenix hole that much deeper.

The Phoenix opened up the second half with vengeance on its mind.

Freshman forward Hunter Woods got on the board for the first time in the game, and also gave the Phoenix its first lead of the game. Woods knocked down his first two points to give the Phoenix it's initial lead of 34-33. Woods missed his foul shot but made up for it by sinking a huge three to push the lead even further.

“Starting the game down 22-8 and for us to turn it around and pick it back up and lock in on defense and for us, a lot of shots started going in and everyone just started filling it. It felt great,” Woods said.

Once Woods got the ball rolling, it came a little easier for the Phoenix. Its scoring drive totaled 18 points before the Owls managed to put its first basket in eight minutes.

The rest of the game was in primarily Phoenix control, with both Sheffield and McIntosh continuing to go back and forth as to who would have the most points at the end of the game. By the end of it, McIntosh would end with a total of 19 points, just scraping by Sheffield’s 18.

"I got some good looks, I just played off my teammates,” McIntosh said. “I think that's kind of how we want to play you know, that's how I want to play going forward. It was definitely good to see the ball going in...Now we just gotta keep picking it up and try to be consistent."

Consistency will be key in the Phoenix upcoming games. As Schrage preached, games like these are “part of the process”, and he continues to be positive about his team’s development.

The Phoenix next travel to High Point University (1-7) to face off the Panthers on Thursday at 7 p.m.