Wings in waiting: ROTC at Elon 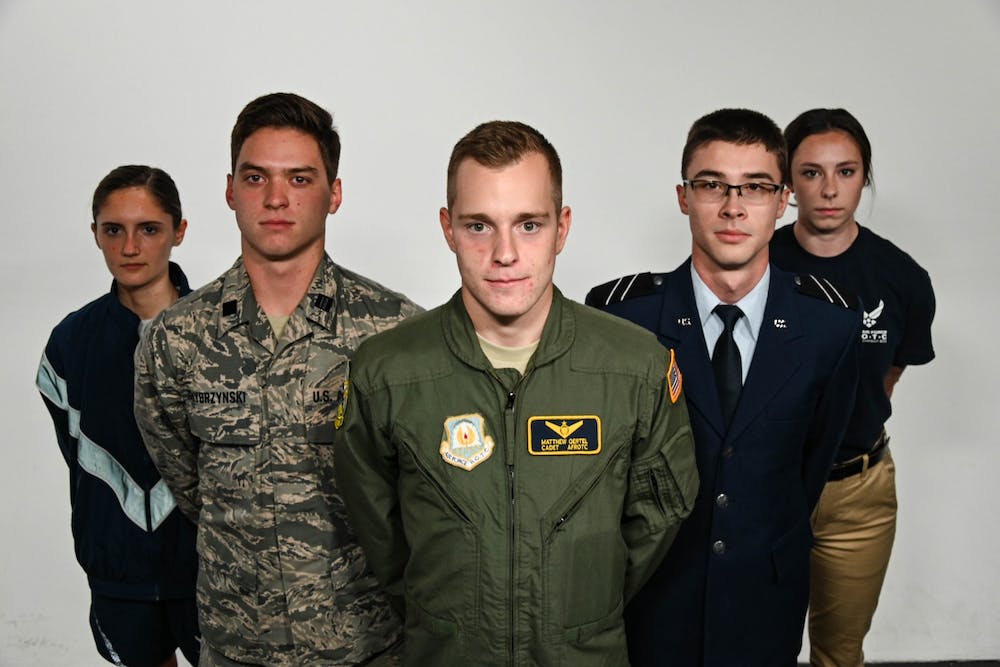 Senior Sarah Boggins’ first alarm goes off at 4:30 a.m. She is the cadet colonel in Elon University’s Air Force ROTC program, the highest rank a cadet can hold in ROTC. Like other Monday and Wednesday mornings, she is on the road by 5 a.m., making the half-hour drive to North Carolina A&T State University for physical training.

Before the sun is up, the underclassmen join their flights — the smallest unit in the Air Force — outside the BB&T Stadium and begin an hour long circuit of ab exercises, running laps and uphill sprints. Inside, Boggins and her fellow upperclassmen take their semesterly physical fitness exam, which includes a minute each of push-ups, sit-ups and a mile-and-a-half run.

Despite the early hours, Boggins said the time she spends with her wing is the best part of her week.

“It’s provided me a family. I struggled to fit in at Elon,” Boggins said. “I don’t really feel like I can relate to a lot of the students here because the hometown that I grew up in is a lot different than the hometown a lot of my peers grew up in. Being able to find a family at A&T is like a home away from home for me. … Being able to see those people makes everything better when things seem difficult here back at Elon.”

Cadets from Elon and other universities in the detachment, which are known as “cross-town schools,” are required to travel for their weekly training sessions because ROTC classes are not taught at their respective universities.

According to Nancy Harris, associate dean of College of Arts & Sciences, a new advisory committee is being created to support current ROTC students and encourage recruitment on campus. When formed, the committee is expecting to meet four to five times a year.

Senior and Army ROTC Cadet Kyle Delaney’s battalion, or infantry unit, is also located at A&T. His PT sessions are from 6 to 7 a.m. on Tuesday, Wednesday and Thursday mornings. He attends an additional three-hour class on A&T’s campus on Tuesdays and Thursdays.

According to freshman and Air Force Cadet 4th Class Arran Ponte, Elon and A&T are understanding of the cross-town students’ schedules.

“It’s kind of just like doing any other sport,” Ponte said. “Instead of going to soccer practice after school, I just go to ROTC.”

While their weekly routine stays the same, sophomore and Air Force Cadet 3rd Class Chase Haley said that each year comes with new challenges as cadets rise through the ranks.

Underclassmen prepare for field training, a 14-week summer intensive camp at Maxwell Air Force Base, Alabama, to graduate from the general military course to the professional officer course between their sophomore and junior years.

Upperclassmen often assume leadership roles within their wing as they prepare for commission after graduation. Haley said staying motivated is essential to managing the added expectations.

"You have to learn proper motivation. If you can't motivate the people around you or yourself, the mission's not going to get accomplished."

“You have to care about others and be able to lead others through events that might be the toughest of their lives,” Haley said. “It’s a culture shock when you go from sleeping all summer to waking up at 4:30 for PT. ... You have to learn proper motivation. If you can’t motivate the people around you or yourself, the mission’s not going to get accomplished.”

According to Haley, all cadets have a different reason for putting on their uniforms in the morning.

Boggins does not recall any of her family members having served in the military, but like Haley, she grew up with a passion for serving.

“The Air Force is very well known for taking care of its people, and I wanted a branch that was guaranteed to do that,” Boggins said.

Senior and Army Cadet Angela Cammen said her parents each spent more than 20 years in the military. Her older sister, who also participated in ROTC, is now a second lieutenant in the Army. Cammen and Delaney will be commissioned as second lieutenants upon graduation.

“It’s kind of a family business for us,” Cammen said. “I’m just really excited to serve like my parents and my sister.”

Nationally, interest in joining the military is waning. A series of 2017 internal Defense Department surveys showed that only 11% of young adults say they will likely join the military — the lowest point in nearly 10 years.

The perks of service

During his freshman year, Haley said he was so overwhelmed with classes and extracurriculars that he dipped below the GPA requirement. He said it wasn’t his proudest moment. But Haley said the discipline he has learned from being in the Air Force has helped him stay on track.

“You just have to realize that you have to get it done. It’s not an option if you want the commission,” Haley said. “That really just teaches you it’s just another day, and once you get up and shake it off, it’s worth it in the end.”

After graduation, cadets are expected to serve a minimum of four years in the military. However, the minimum service after college depends on the job and the amount of time required to train for it.

In ROTC, Haley said cadets are expected to live by the Air Force’s core values. The program puts emphasis on leadership, which he said has changed his sense of purpose.

“I thought I was a really good leader coming in ... but I was not well-rounded. I was still doing it for myself,” Haley said. “Now it’s not just about me crossing the finish line, it’s about getting that guy or girl through field training and then the commission. ... I just want to see everybody else succeed.”

While Haley grew into his role, Boggins said she’s a “natural born leader.” But she said her biggest challenge was adjusting to leading a 30-plus cadet unit when she was appointed wing commander.

Boggins said her leadership experience in ROTC has prepared her for active duty, but there will still be a lot to learn.

Boggins said she hopes to work in the Air Force Office of Special Investigations after graduation and intends to stay in the military for 20 years. Ponte’s goal is to one day become a doctor.

Haley said he looks forward to a hands-on position as a pilot or a special tactics officer to help protect people, but he understands the argument against fighting in a war.

“I just like the idea of helping those guys get home,” Haley said. “There’s always a lot of people, even in the media today, asking should we be in this war? Should we be over there doing this and that? But half the guys over there are just wanting to get the guy beside him home.”