Liza Donnelly speaks to students about the changing landscape of cartoons 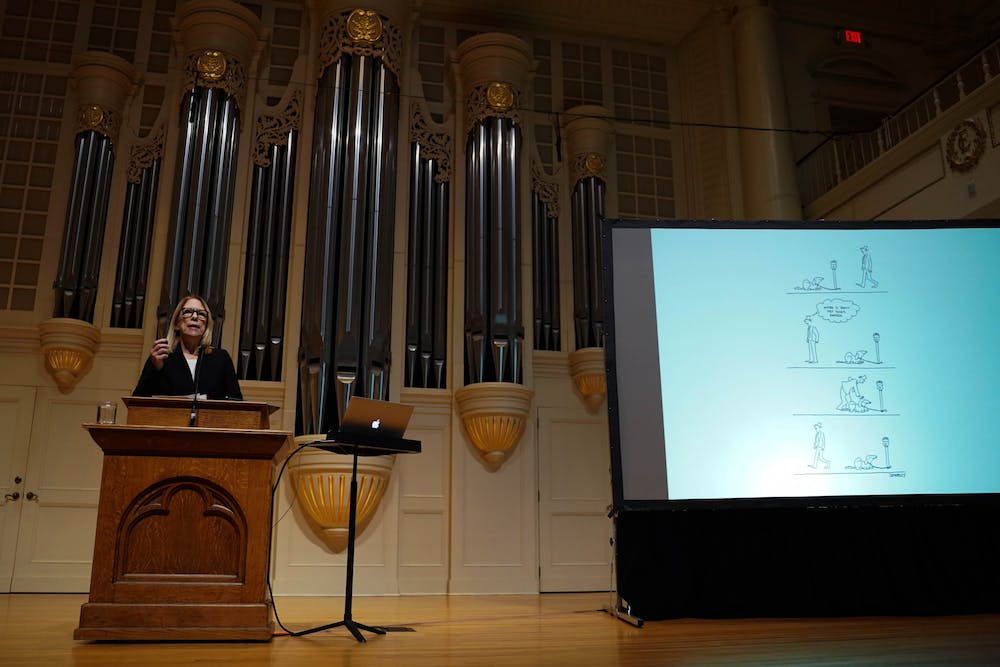 
Liza Donnelly, who has had work featured in The New Yorker, shows the first cartoon she ever drew during her visit to Elon University in Whitley Auditorium on Thursday, Nov. 14.

“If you can’t tell, cartoons are my life,” Liza Donnelly, cartoonist, said to the crowd gathered at Whitley auditorium for her presentation “Drawing on Humor for Change.”

“Drawing on Humor for Change” is the second Liberal Arts Forum event of the academic year, following Andrea Pino-Silva. In addition to her speaking event, Donnelly also visited classes and did a live drawing.

“She's such a powerful voice,” Grimes said. “I'm excited to hear how she does it through cartoons, instead of through words.”

Junior Sarah Kitslaar came to see Donnelly because she grew up on the New Yorker.

“My mom is like the biggest fan of New Yorker, we always have the magazines around,” Kitslaar said.

Among many students, faculty and community members, Donnelly had support from her family in the audience. Donnelly’s cousin who formerly worked at Elon as a dean and university librarian, Kate Donnelly Hickey.

“She may be one of the few people in my family that’s heard me speak,” Donnelly said.

Hickey said Donnelly has a great sense of humor, but what strikes her most is Donnelly’s accomplishments.

“What impresses me is the wide variety of things that she's done while still being a cartoonist,” Hickey said. “She's illustrated children's books, she's done this stuff on CBS and she's taught at Vassar.”

During Donnelly’s presentation, she spoke about her start in cartoons. She began working for the New Yorker in the 1970s, in a male-dominated industry. There were only three women cartoonists at the New Yorker when she started out, she said.

“I just looked at other cartoonists and didn't even know what gender they were,” Donnelly said. “I just wanted to be a cartoonist.”

As a freelance cartoonist, Donnelly submits six-to-ten cartoons in a week and hopes one is bought by the New Yorker. Despite the “high rejection rate,” Donnelly said the great part is learning “how to draw for yourself.”

“You learn to draw what you think is funny and what means something to you, to stick to what you want to do,” Donnelly said.