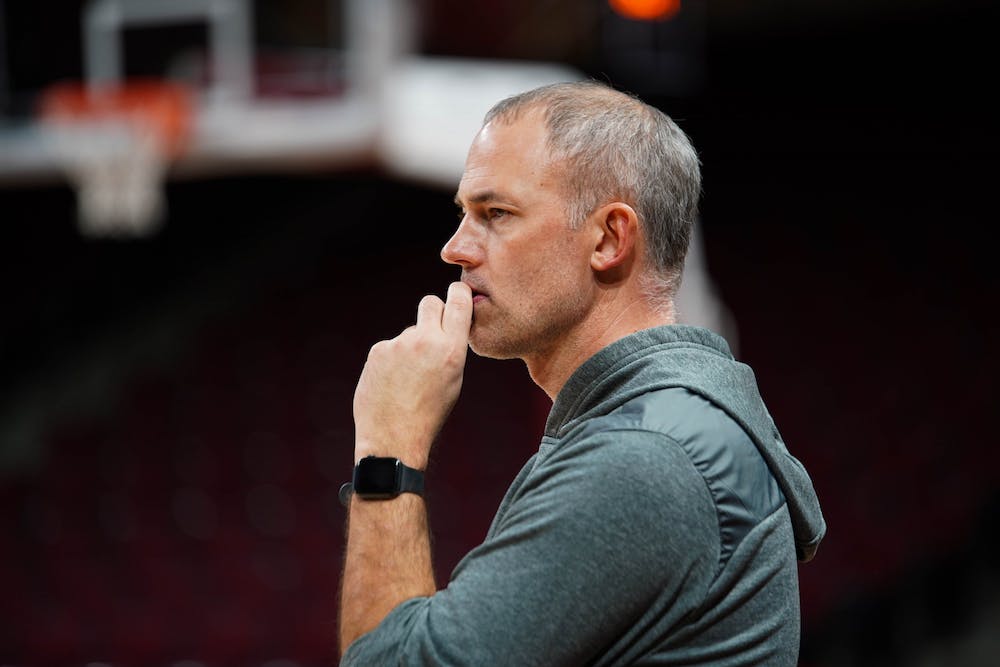 Schrage and his family made the move to North Carolina after two years as an assistant head coach with The Ohio State University Buckeyes.

In his two years there, Schrage and the team made it to the NCAA Championship Tournament twice, but fell short in the second round both times. The experience of making it to “March Madness,” as it has been popularized, is still something that Schrage said he would never take back.

Schrage said as exciting as March Madness is for fans on TV, “it’s even better when you’re living [it] in person.”

According to Schrage, his time in the tournament was one of the things that persuaded him to accept the challenge of coaching at Elon, a school that has never made an appearance.

“Elon wants to make the step to be an NCAA tournament team,” Schrage said. “There’s no better feeling than doing that and I can only imagine the feeling of doing that a place where hasn’t been done before.”

Schrage said he and his team aren’t looking too far ahead in setting lofty goals. But in the back of his mind, Schrage said he’s thinking of tournament play and getting the men’s basketball team on the championship banner.

“Obviously I would love to be the head coach to take Elon to a height it’s never been before with the NCAA Tournament,” Schrage said. “Right now, it’s about building this program with a new staff and just getting better every day and building standards and family.”

Schrage has been creating his standards for players, starting with his experience coaching at Duke University. From 1999 to 2002, he was the academic and recruiting coordinator until he became the director of basketball operations. With this title, he assisted the team with recruitment along with his other operation duties.

Schrage continued coaching at Stanford University, where he was an assistant coach there from 2008 to 2016. With this title, Schrage still found himself dealing heavily with recruitment.

Over time, Schrage narrowed down the values he looks for in recruiting. He honed in on these values with this years’ recruitment class with the opening of five scholarship spots.

Schrage also said that above anything else, he wants to establish trust with the team so he can feel more at ease.

“I want to trust the young men that we’ve recruited and continue to mentor and say, ‘Hey, they’re going to make the right decisions when they’re here,’” Schrage said. “They need to understand that they’re putting their signature on everything they do, every decision they make. Once they’re here, it reflects on them, reflects on us, reflects our programs and their family back at home.”

In his previous jobs, Schrage said he never even thought about pursuing a head coaching job until the position at Elon was presented to him. Schrage said the process started smoothly because of Athletic Director Dave Blank’s familiarity with him.

“It moved pretty fast. [Ohio State] was in the NCAA Tournament when we initially had contact and once we got eliminated in the second round, it moved faster because it’s hard when you’re immersed with your own team,” Schrage said.

Schrage said his visit to campus made the process go faster, and he knew the job was for him.

“When I came, I was blown away by the campus but was really blown away by the Schar Center too,” Schrage said. “I remember calling back to Ohio State and being like, ‘Hey, I’m getting this job. I’m sorry, but this is perfect.’”

When Schrage found out he had been offered the job, he said he tried to call his wife to share the news, but couldn’t contact her right away. He said he remembered feeling the pure euphoria of it all.

The move from Ohio to North Carolina brought back some familiarity for Schrage and his family.

In his time at Duke, the family had lived in Durham, North Carolina, but he said his kids were probably too young to remember that time. It also wasn’t the first time the family moved to follow Schrage’s position. Of the total eight schools that Schrage has worked in, four of them were in completely different states.

“It’s not easy on the family ever, especially at the age my children are because they develop great friendships and relationships wherever they’ve been,” Schrage said. “They’ve been great and they understand my passion. They knew how much my wife and I loved it so they were pretty excited.”

After finally contacting his wife and telling his family about their eventual move, Schrage made the seven hour drive from Ohio to North Carolina to meet the team the Sunday before his first press conference.

"I said, 'Hey, we have something in common. You chose Elon, I'm choosing Elon now, but now Elon chose us."

“I wanted them to know how excited I was to get to know them and to be at Elon,” Schrage said about his first encounter with the team. “I said, ‘Hey, we have something in common. You chose Elon, I’m choosing Elon now, but now Elon chose us.’”

Schrage said he wanted the team to feel comfortable with him right away, so he focused on the one-on-one personal connections with the players first.

He said he wanted to set up the individual meetings early just to get to know them as people and their expectations.

This year, Schrage said he is focusing on the foundation of the team. He said his dreams for the team will start one day at a time, with one player at a time, making one play at a time.

Though the process may be long, and the team may not always come out of games with a win, Schrage said he wants Elon to trust his process.

Schrage said he recognizes Elon’s vision for growth, and he asks the community to, “Please know, I’m bringing that vision as best I can to the basketball program specifically.”