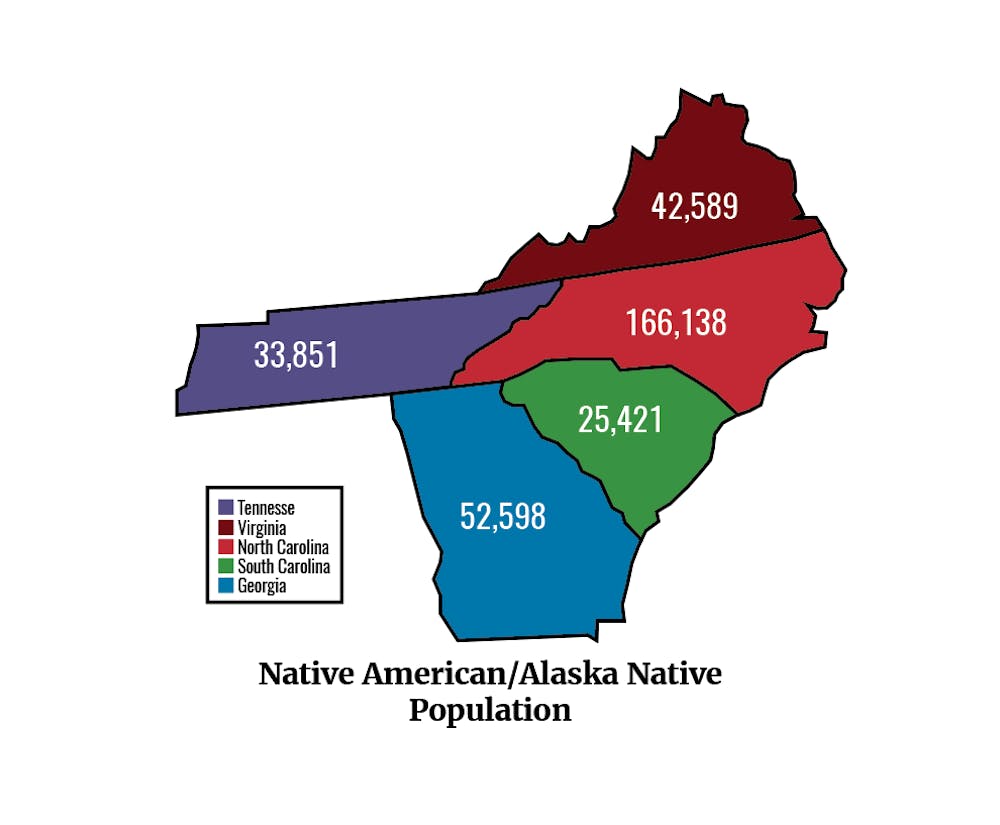 As a member of the Cherokee nation, freshman Lakota Grindstaff found a sense of community at Elon University through its year-old Native American Student Association.

At Elon, seven undergraduate and six graduate students identify as American Indian according to last year’s Elon University Fact Book. Grindstaff grew up in western North Carolina, which is home to the largest Native American population in the state.

“It was just kind of surprising to see how low the population is here,” Grindstaff said. “It does feel a bit small in comparison to the west.”

Despite the small percentage of Native American students at Elon, Grindstaff feels her culture is supported on campus, which is currently celebrating Native American Heritage Month, a nationally recognized event.

"It's really important for people to understand that these communities have long, clearly documented histories, and that the sTATe of North Carolina has formally recognized their legitimacy going back to the 18th century."

“It’s really important for people to understand that these communities have long, clearly documented histories, and that the state of North Carolina has formally recognized their legitimacy going back to the 18th century,” said Clyde Ellis, professor of history, an expert in Native American culture and affairs, who has studied pow wow culture in North Carolina.

While Beverly Payne, a member of the OBSN, appreciates the month, she worries that Native American culture is only recognized in November.

The East Band of Cherokee Indians, whose reservation is west of Asheville, is the only federally recognized tribe in North Carolina. Only eight tribes, including the Occaneechi Tribe, are recognized by the state of North Carolina.

According to the North Carolina Commission of Indian Affairs, more than 229,000 American Indians and Alaska Natives live in the state — one of the largest indigenous populations on the East Coast.

In the mountains of the Cherokee reservation is a small cabin that Grindstaff considers a home.

Grindstaff often visits the reservation where some of her family lives. Over the years, Grindstaff says she has seen an increase in tourism.

“I like it that people are interested in the culture and want to learn about it, but I don’t like how some of them get drawn there by inaccurate stuff,” Grindstaff said. “Educate yourself more and be able to understand it, not just from the way that it’s portrayed.”

This portrayal is something that Ellis said he believes could create incorrect assumptions about Native American culture.

“It’s crucial for people to understand that these are fully functioning, culturally viable modern nations with long histories, and with deep cultural roots that have not been forgotten or ignored,” Ellis said.

In 2018, President Connie Book announced the creation of the Commemoration Committee — now named the Committee on Elon History and Memory –– whose goal, according to the website, is to “explore questions related to historical memory and collective identity.”

Professor Charles Irons, chair of the committee and the Department of History and Geography, explains that they are committed to discussing the issue of land acknowledgement with local tribes.

Although Elon currently does not have anything definitive in place, Irons says that meetings are taking place this week. As of now, the committee’s report is set to release in the spring.

Over 200 years before Elon’s founding, Alamance County was dominated by the Occaneechi tribe.

Other organizations, alongside NASA, are working to expand education about Native American culture.

The 2021 cohort of Periclean Scholars, a national program focused on civic engagement and social change, is planning its second trip to the Oglala Lakota Children’s Justice Center on the Pine Ridge Reservation in South Dakota.

“I believe that the more we can understand the struggles a people go through, the better we can understand our own struggles and our approaches to dealing with difficulties,” said cohort mentor Bud Warner, associate professor of human service studies. “The Lakota are a people with a long heritage and noble ideals that, like other Native Americans, have been dealt with less than honorably by the majority culture.”