Elon cross country is racing to the finish line

With successful seasons behind them, both Elon cross country teams are looking for their first conference titles 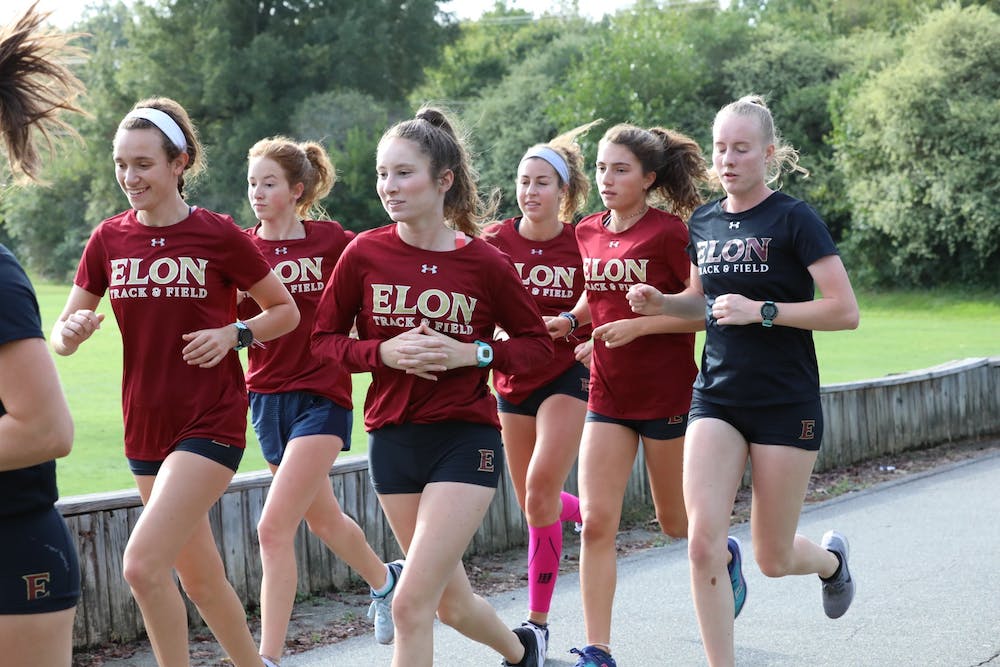 The Elon University cross-country teams are looking to end the season with another NCAA Regional Championship appearance. However, before punching their ticket to Charlottesville, Virginia, they will be traveling to New Market, Virginia, for the Colonial Athletic Association Championship on Friday Nov. 15.

Both the men’s and women’s cross-country teams have performed well this season, but these teams are different from those in the past. While youth and transfers have been the talk of the 2019 season, the athletes still have one goal in mind: capturing the elusive conference title.

The team will be traveling to New Market, Virginia, for the Colonial Athletic Association Championship on Friday, Nov. 15.

The women’s team got the closest to delivering Elon its first CAA cross-country title. In 2018, the team fell short to the College of William & Mary Tribe by only two points.

Although the team lost three seniors last year, including Coralea Geraniotis, who won an individual title at the 2018 conference championships, the seniors were replaced by new rising talent. Most notably for the women’s team, senior runner Scolasticah Kemei, native to Kenya, has had a dominating season.

Kemei finished her last meet with a time of 20:25, finishing in first place for the Phoenix while also beating the university record. She is the first athlete to win three individual races in her career at Elon and has been named CAA Runner of the Week four times.

Freshman runner Maria Ahm said senior runners such as Kemei serve as inspiration to the younger athletes on the team.

With regard to the conference meeting, Ahm said she intends to prepare herself well for it.

“I will focus on my mental game. I will prepare myself for every practice and give 100%,” Ahm said.

points were put up by the women's cross country team at the James Madison University Invitational. This allowed the team to secure the first-place title, along with the men's team.

Freshman Aidan Tierney said his approach is more so about following the direction of his coach amidst his transition from high school athletics.

“It’s completely different. All of a sudden I am a small fish in a very big pond,” Tierney said. He said he plans on “doing the right things at the right time and lowering the mileage.”

“A large part of our formula is not to reinvent the wheel. We, as a team, need to keep doing what is working well for us,” Jeremyn said. “We will look to add less volume before the conference championship meet. We are going to do enough to stay sharp and keep our energy reserves up.”

This sentiment was evident in both the men’s and women’s performance at the outset of the season, beginning with the James Madison University Invitational, in which both teams came in first place, with the women’s team putting up 32 points and the men’s putting up 40.

"A large part of our formula is not to reinvent the wheel. We, as a team, need to keep doing what is working well for us. We will look to add less volume before the conference championship meet."

The top runners included Kemei and sophomore Andrew Miller, both of whom finished in first place with times of 21:06.6 and 26:02.3, respectively.

Kemei and Miller also continued to lead the Phoenix at its next meet, the Virginia Panorama Farms Invitational, leading to the women’s and men’s team placing fourth and 14th, respectively.

The following week, the Phoenix ran in the East Carolina University Pirate Invitational, which turned out to be a bounce back victory for the men’s and women’s cross-country teams.

was junior Scolasticah Kemei's final time in the last meet of her collegiate career. She finished in first place for the Phoenix and set a new school record.

This victory gave the Phoenix confidence leading into the conference championships, as it was the last regular season meet. The Phoenix carried this momentum into its last meet with the men placing 21st and the women 25th.

The Phoenix looks forward to keeping pace as it prepares to compete in the conference championships this Saturday in New Market.