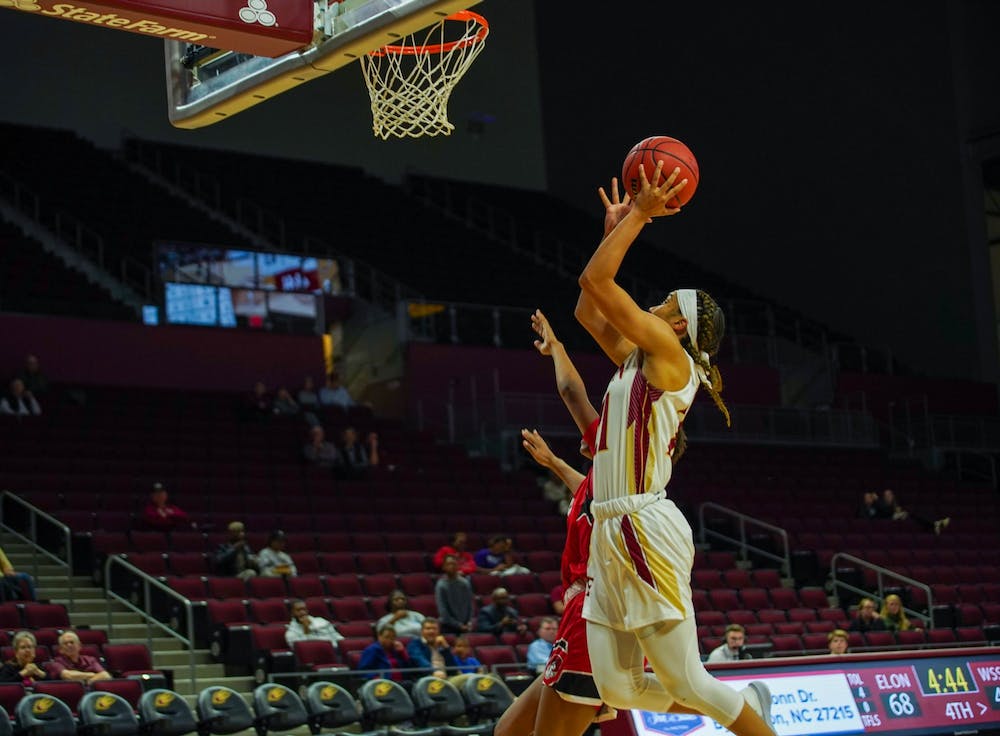 
Elon University junior guard Ariel Colón goes for the layup against the Winston-Salem defender in Schar Center on Tuesday Nov 5.

The Elon women’s basketball team defeated the Winston-Salem St Rams 77-48 on Tuesday night in their first — and only — exhibition of the season.

Though an exhibition matchup to start the season, the Phoenix treated the game like a regular season matchup. Elon returns two starters this season in sophomore point guard Brie Perpignan and sophomore guard Kayla Liles; who combined to average over 14 points per game a season ago.

Coming out confident in their play, Winston-Salem set up in a 2-3 zone to start the game. Sophomore guard Amaya Tucker caused chaos on the defensive end with a number of steals for Winston-Salem that helped them gain momentum.

“Coming out of the first quarter down by one, we just had to lock in and execute our plays that coach wanted us to run,” Perpignan said.

In the 2nd quarter, Elon slowed down and controlled the pace of play. Freshman Maya Johnson showed flashes of her potential scoring the basketball. Johnson knocked down a pair of mid-range jump shots and finished the 1st half with a team-high 10 points. Elon held the Rams to seven points compared to their 24 in the second quarter.

The Phoenix had a clear size advantage with their average starter standing 5’ 10” while Winston-Salem stood a mere five-foot, seven-inch.

“We knew we had that advantage inside and so we wanted to make sure we were very intentional about trying to get it inside,” head coach Charlotte Smith said.

The Phoenix didn’t let up in the 3rd quarter with Perpignan leading the way. She drove to the hoop the entire game, always making the right decision with the ball. Perpignan finished with 11 points and three rebounds.

With a steady lead, Smith experimented with different lineups and all but four Elon players scored going into the fourth. At one point, Winston-Salem St. cut the lead to 19 after a pair of threes by senior guard Jahlia Williams but it was far too late for a comeback. Elon continued to out-rebound the Rams and take advantage of easy baskets on the fast break.

With the final buzzer the score stood at 77-48.

“We did not play our best basketball today, so there’s definitely room for improvement and we have to go back to the drawing board in terms of our zone offense,” Smith said.

Elon will take on the Western Carolina Unicersity Catamounts on Saturday, Nov. 9, at 7:30 p.m. in Schar Center to open the regular season.