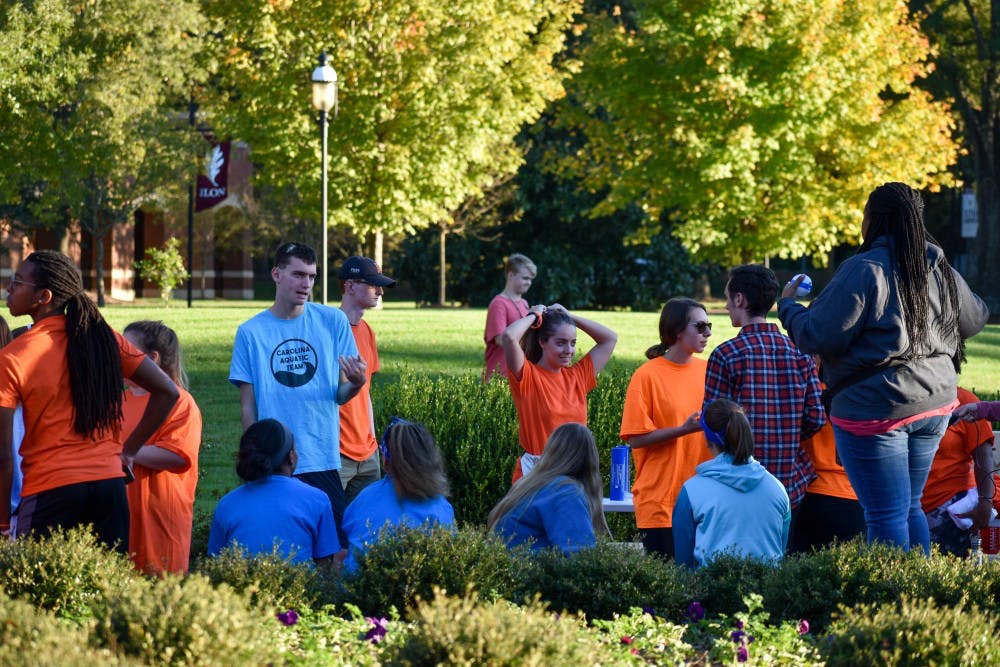 Photo by Benjamin Muse | Elon News Network
Students make a game plan before the start of a campus-wide capture the flag game on Thursday, Oct. 24, which was hosted with the goal of increasing student engagement.

According to the Residence Life website, Elon University creates communities that enhance learning and engagement by interacting with faculty, staff and fellow students in residential neighborhoods.

The website also says that students encounter new ideas and perspectives on life through both formal and informal activities within Residence Life.

Elon aims to achieve this by hosting daily events that bring the entire campus together whether that be a cheese tasting in the Global Neighborhood or a campus-wide game of capture the flag.

On Oct. 24 the latter of those was put on in an effort by Residence Life to promote campus engagement and community.

“The idea originated from the Colonnades Neighborhood as they planned to host capture the flag for their first-year residents during New Student Orientation,” said Billy Baker, community director for The Station at Mill Point and Crest Apartments.

When the rain during New Student Orientation delayed the game, Sylvia Wade, community director for the East Neighborhood, suggested that Residence Life host the game and include all neighborhoods at a later date.

“I decided to play capture the flag because it just seemed fun, I had loved it for years so I thought, ‘why not,’” freshman Chase Williams said.

There were two teams, blue and orange, with different neighborhoods playing together.

"It is a way to meet new people that you'd probably never meet."

While the game itself was fun, Baker pointed out the greater significance of the event.

“When students discover pathways of engagement, they are able to relate with those around by building community and navigating identity,” Baker said. “It is important to remember that engagement is holistic, meaning there are many opportunities. Capture the flag was one piece of the greater picture.”

“Over the past year, the community directors spent time planning events where all campus residents can join together in community,” Baker said. “Overall, the purpose to build relationships across neighborhoods increasing the level of students’ community and sense of belonging.”

Baker said students who are engaged on campus not only have the opportunity to meet more friends, but they actually perform better in the classroom.

“Engaged students tend to have a greater level of persistence when it comes to completion of a degree,” Baker said.

According to Baker, one feature of Residence Life that exemplifies campus engagement is The Living and Learning aspect. “The liberal arts push the university to encourage students to engage with thought and action that is different from their own,” Baker said.