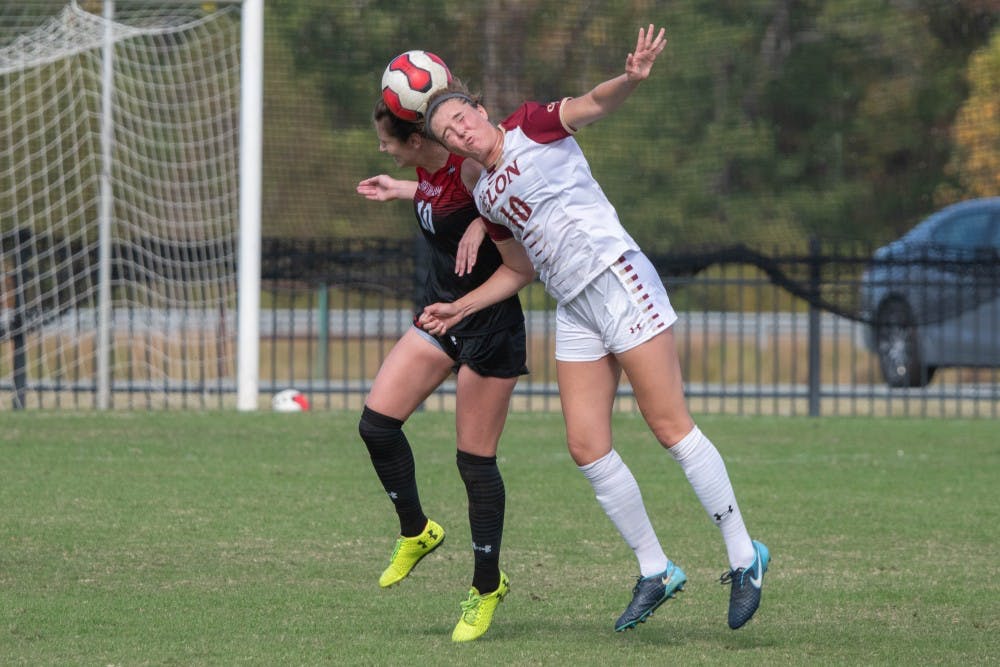 The Elon University Phoenix (11-5-2) were defeated by the Northeastern Huskies (8-9-1) 4-0 Sunday afternoon at Rudd Field.

An influential game for both sides, Elon and Northeastern fought for seeding in the CAA playoffs that begin next week. The Huskies had won three straight going into the game and have yet to be beaten by Elon in CAA history.

Junior forward Chelsea Domond set the tone for Northeastern with her quick first step to create opportunities to score. Domond battled with Elon sophomore defender Kayla Hodges throughout the entire half with races down the right sideline fighting for the ball.

Elon showed glimpses of offense with nine minutes remaining in the half. Senior forward Taylor Paradoski hesitated to the right with the ball just outside the box, opening a lane where she fired a shot that made direct contact with the crossbar, just inches away from the nylon.

“We played well in the first half. We knew we were coming up against a good team with Northeastern traditionally top two or three in the conference and they looked like that again today,” said head coach Neil Payne.

Northeastern came out of the half with an aggression different from the first half. Elon gave up two corners and a free kick outside the box in just a matter of a minute. Junior defender Mikenna McManus took the free kick and delivered a shot in the top right corner of the net past Elon freshman goalie Katrin Houksdottir.

Just four minutes later, McManus found herself at the same spot with the ball after a deflected corner kick. She turned to her left and scored in nearly the same way she had previously. The Huskins led 2-0 and were taking control of the game.

Elon chose to play safe in the second half, making lots of substitutions and saving the legs of most of their starters. Freshman forward Jessica Carrieri found chances to score with a pair of shots on net but couldn’t convert.

Northeastern scored two more goals in the final twenty minutes of the game. One came off a deflected corner by McManus and the second was put away by sophomore midfielder Ashley Reuter, her first of the season.

The Huskies shut out the Phoenix 4-0 in the final game before the CAA Tournament.

“The good thing about playoffs, especially after today is that records don’t matter anymore so we know what we have to do, we obviously have to play better than we did today, and we know we can,” said senior forward Taylor Paradoski.

Friday, November 1st at 1 p.m, the Elon Phoenix will rematch against the Northeastern Huskies in the Quarterfinals of the CAA Women’s Soccer Championship at Hofstra University.