Daniel’s 11 kills not enough to propel Phoenix past Tigers 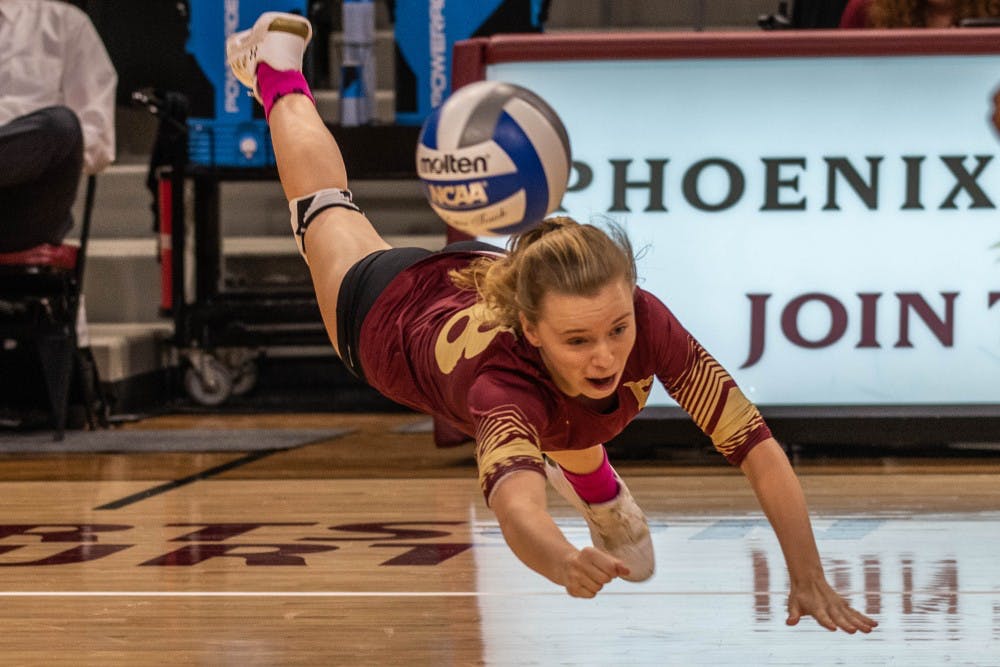 The Elon Phoenix (9-11, 4-3 CAA) fell to the Towson Tigers (16-2, 6-0 CAA) in four sets 3-1 on Sunday afternoon in Schar Center. The Phoenix has now dropped three of their last four conference matches.

Coming into the match, the Tigers had only lost one set in conference the entire year. Led by senior outside hitter Annie Ertz and sophomore outside hitter Emily Jarome the Phoenix were in for a challenge against the top-ranked team in the CAA.

Elon set the tone for the match with fast-paced play that got them ahead early. Junior middle Natalie Cummins strung together a pair of blocks on a 4-0 run to tie the game at 21. Towson soon called a timeout but couldn’t stop the momentum of the Phoenix as freshman middle Jenn Krzeminski ended the first set with a kill.

“Our focus lately is starting out matches because we did well yesterday,” head coach Mary Tendler said. “I was really happy we got off to a good start and took the first set.”

Towson’s reigning CAA defensive player of the week, Silvia Grassini,  forced a handful of blocks against Elon’s kill leader—sophomore outside hitter Leah Daniel. The senior middle finished with five blocks in the game. Towson had a 6-0 run to put them ahead and never looked back. The Tigers took the second set 25-14.

Daniel and the Phoenix continued to fight after starting the third set down 11-2. The Tigers were settled in and finding ways to deconstruct Elon’s line of defense. Sophomore outside hitter Emily Jarome stepped up for Towson and converted a handful of her game-high 16 kills. Elon lost the third set 25-11.

“We talk about energy and keeping high momentum and making sure that we’re doing all the things that we need to do,” Daniel said after the game.

Early energy came from the Elon side as junior outside hitter Madison Genaway started off the set with an ace. The Phoenix took advantage of multiple scoring opportunities but couldn’t hold back the Tigers. The Towson Tigers won the fourth set 25-19 and the match 3-1.

“Seeing the undefeated team in conference, it’s a barometer of what it’s going to take to win conference and how we have to play. It was great for our players to see which makes being in practice and knowing the level of intensity we need,” Tendler said.

Elon will look to get back on track in a non-conference matchup at North Carolina Central University (3-15) Wednesday, Oct. 16.