The former U.S. Attorney spoke on his legal experience and hope for the future 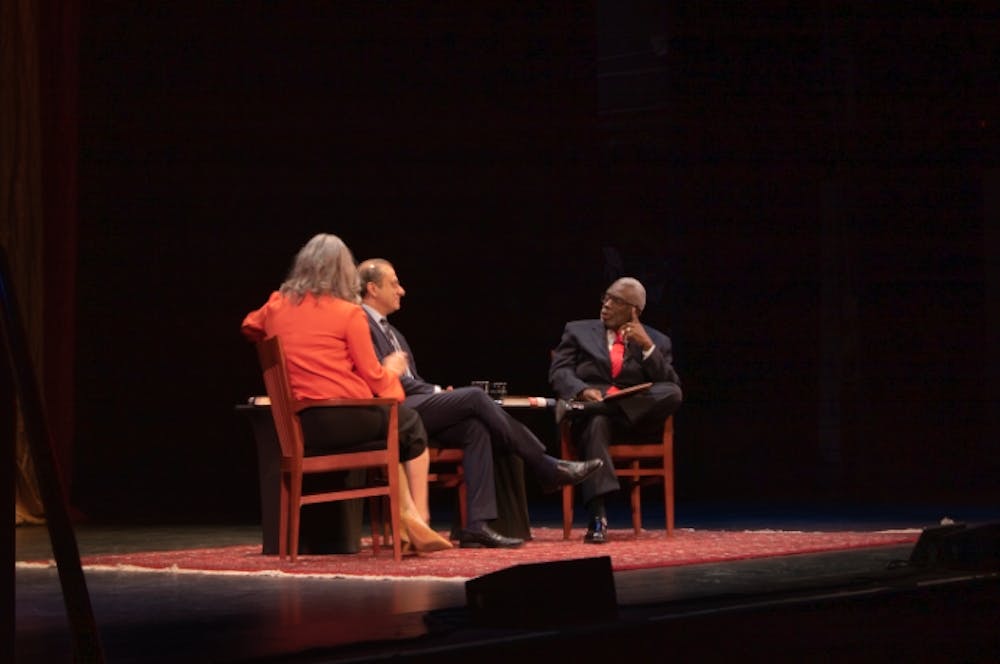 Preet Bharara, former U.S. Attorney for the Southern District of New York, spoke to Elon University School of Law students and faculty as well as members of the Greensboro community Thursday night. Bharara’s talk, part of the Distinguished Leadership Lecture Series hosted at the Carolina Theatre in Greensboro, centered around his legal experience, and how it informs his day-to-day life.

In an exclusive interview with Elon News Network, Bharara spoke on these topics and more.

After serving eight years in the role of U.S. Attorney, Bharara was fired by the Trump administration when he refused to resign. Since then, he has made the transition to teaching, now a distinguished scholar in residence at the New York University School of Law.

“The value of people thinking like a lawyer, the value of the education the people here are going to get in getting to the bottom of something, understanding how you’re going to discover truth is I think something that is a great lesson for the 320 million or so people who are not lawyers in this country,” he said.

This discovery of truth, or “quest for truth,” as the name of the 2019-2020 speaker series would suggest, has influenced his career and his views on the practice and rule of law.

“If everything is bound up in politics then you make misjudgments about things,” Bharara said.

To get his point across, Bharara set the scene with an analogy.

“You’re an emergency room doctor and maybe a patient comes in and the patient doesn’t agree with your political views, and it’s your local congressman and you didn’t vote for that person, is that going to change how you operate on that person?” Bharara said. “Unless you’re a really terrible human being and a terrible doctor, no... I know it’s sort of a stretch but lawyers are the same way.”

Bharara’s optimism about what he feels the practice of law should be permeates deeper than his hope for lawyers who return to the “first principles” of “what truth is” and “what truth means.”

For example, he says that though it seems as if the Supreme Court — after the norm-breaking nomination of Justice Brett Kavanaugh — has become overly politicized, this is not new.

"To some extent, there is always going to be political controversy with the court because the Supreme Court justices are not like handed down from the lord,” Bharara said. “They’re picked by politicians, and then they’re approved or rejected by other politicians, all of whom have to subject themselves to voters, and all of whom care about what that vote will look like on their record when they put themselves up for reelection.”

Bharara said that in his tenure in the U.S. Senate, he observed first-hand this political deliberation through two Supreme Court nominations.

Bharara’s optimism, however, does not necessarily extend to his faith in President Donald Trump. In the time leading up to the release of the Mueller report, Bharara was hesitant to jump to conclusions about the results. The recent impeachment inquiry, he said, is different.

“The Mueller investigation at all times people should have expected it was going to be conducted in a way… that was really fair, where the special counsel himself would bend over backward not to be rogue, not to go beyond what the law required,” Bharara said. “This is completely different. This is an inherently political process, I don’t mean that in a pejorative way, it’s necessarily political.”

Whether or not the inquiry will result in Trump’s impeachment, Bharara said, depends upon the viewpoints of the Democratic and Republican parties.

“I think how it plays out depends on how the parties see their roles, how thoughtful they can be, how deliberate they can be, how bipartisan they can be if that’s possible and how clearly the evidence can be developed, Bharara said. “If you’re going to take an action that will damage or perhaps even remove a president duly elected, you want not just one side to have a belief that misconduct occurred.”

The subject of impeachment was brought up at the end of Bharara’s talk, when Elon Law Professor George Johnson asked simply, “what do you think of all this impeachment stuff?”

Bharara, highlighting his podcast, “Stay Tuned with Preet,” said that George Conway of all people offered insight into the issue of a possible Trump impeachment.

Conway – the husband of Trump counselor Kellyanne Conway– told Bharara in a recent interview that if given a secret ballot, he believes republicans would unanimously vote to impeach Trump. The insight comes as a striking example of possible bipartisanship through what Bharara called “an inherently political process.”

Though Bharara’s talk ranged from explaining what exactly the U.S. Attorney for the Southern District of New York does to exploring the concepts of justice versus winning, many of the topics throughout the talk related to Trump.

Johnson told Bharara that he had addressed the “elephant in the room” after Bharara spoke on corruption.

Elon University President Connie Book said the theme of the 2019-2020 lecture series is “about understanding leadership across a spectrum of belief,” which is one aspect of Bharara’s talk that stuck out to her.

“I especially enjoyed his observation about his best friend being someone he didn’t politically agree with, but that he respected and cared deeply about, and I think that’s a great reminder,” Book said, referring to Bharara’s anecdote about his relationship with lawyer Viet Dinh.

“He’s not my friend,” Bharara said. “He’s my best friend, and I was best man at his wedding.”

“I got to speak with him earlier as a leadership fellow,” Carter said. “To speak with him and to listen to someone who is currently involved in so many events that are changing you know our nation and who’s in the know… I feel honored to be an Elon Law student to be able to become something like this.”