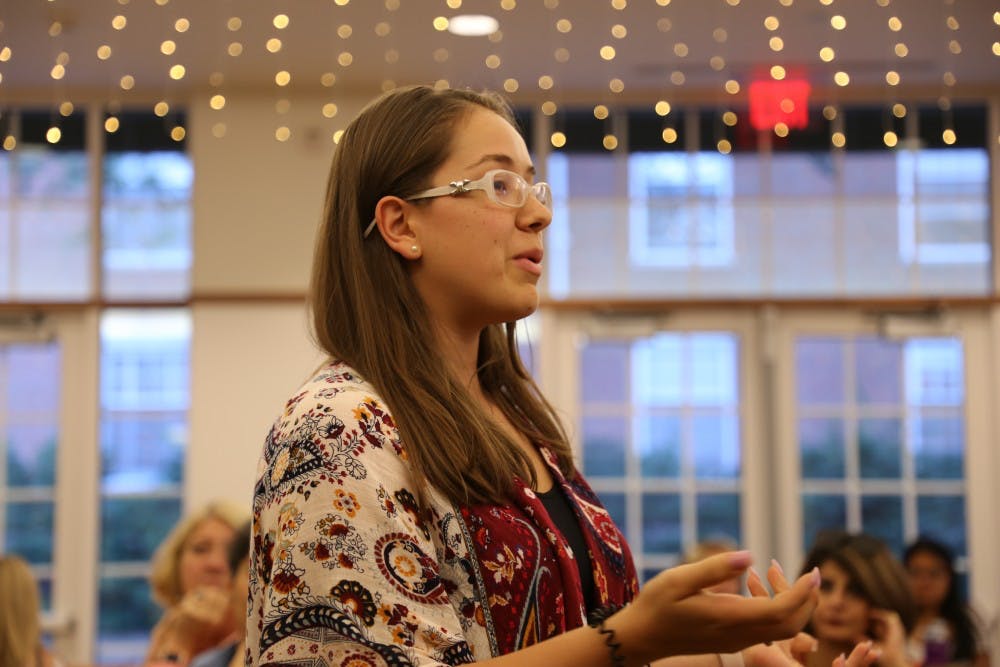 Despite reaching out to more than 30 students on Facebook, Noor Irshaidat lived alone her first two years at Elon University. Her profile clearly shows that she is Muslim and from Jordan, and to her, that felt like the reason she couldn’t make connections.

Irshaidat is now the senior class president and serves on the President Student Leader Advisory Council. Additionally, Irshaidat is both a Leadership and Innovation Fellow, vice president of a business honor society, a group exercise instructor and the founder and president of the Elon Muslim Society. Her issues no longer entail finding connections with people but rather finding time to balance all of her relationships.

Irshaidat came to Elon in the midst of the 2016 U.S. presidential election.

According to the Federal Bureau of Investigation, that year saw an all-time high in hate crimes committed against Muslims in the U.S. Irshaidat not only saw that trend happening around her during her first weeks in the U.S., but also said that the environment made her uncomfortable talking about her national and religious identity.

"PEOPLe thought people from my region were terrorists. I was being asked by students all the time if I would be deported because of the travel ban. It was a scary time. ."

President of the Elon Muslim Society

“People thought people from my region were terrorists,” Irshaidat said. “I was being asked by students all the time if I would be deported because of the travel ban. It was a scary time.”

At that time, Irshaidat said she didn’t know any other Muslims or Arabs at Elon. She spent her early days at Elon worrying that she, and students like her, might not be able to stay in the U.S., even if they had done nothing wrong.

“That’s what a lot of students here were facing,” she said. “And we didn’t have others to talk about it with.”

Sophomore Heeba Chergui, vice president of EMS, says she shared Irshaidat’s sentiments of feeling out of place when coming onto Elon’s campus.

On her first day of college, Chergui found herself sitting in a crowd of people who looked nothing like her. After attending Phoenix Fusion, a two-day event focused on diversity at Elon, Chergui realized, as she sat in her class of 30, that Elon’s diversity initiative was not as widespread as she had imagined.

“I knew that Elon was a predominantly white institution,” Chergui said. “But I never knew how alienating it would be to be the only person of color and Muslim in my classes.”

For junior Alaa Suleiman, treasurer of EMS, the fact that there was no Muslim student group “blew her mind.”

“I understand that we are the minority here,” Suleiman said. “So, when I eventually met people my second semester that were like me, it was awesome.”

Suleiman’s first year at Elon felt more like home after connecting with Irshaidat and bonding over their Jordanian roots. For Suleiman, religion is an important element of her everyday life. It is not only prominent in her personal journey but also in her relationships with others.

Elon students identify as Muslim according to the fall 2019 Registrar's Report.

“It’s important for me to help eliminate some of the misconceptions people have about Islam,” Suleiman said. This motivation has led her to invest in EMS and other initiatives to connect Muslim students and non-Muslims.

Similarly, Irshaidat carried the weight of wanting to educate others on cultures and religions different from their own. That weight motivated her to host a dinner for her friends where she cooked traditional food from her country.

“The first year I did a Jordanian dinner, I invited everyone I knew, which was only my hall,” Irshaidat said. “With the more people I meet, the bigger it got.”

Last spring, Irshaidat hosted more than 80 people for this meal. For her, this means people now think about Jordan and her religion with positive emotions, thinking about good food, hospitality and generosity. These are all characteristics she sees within her country, and she loves to see others having positive experiences, despite stereotypes they may have had prior.

Over the last year and a half, these three women have come together to create a student-run space for those who identify as Muslim. According to Irshaidat, the aim of this club is to increase Islam’s presence on campus, raise awareness of traditions and answer any questions about the religion.

“Ultimately, I hope this club can highlight that we are all the same at the end of the day,” Irshaidat said.

Since the club officially started last spring, Irshaidat said there has been great support from those who are Muslim and those who do not identify with the religion. However, this trend may not be reflective of attitudes toward Muslims in the U.S. in general.

According to a 2017 Pew Research survey, Muslims are rated at the bottom of favored religious groups in the U.S. Because Muslims in America are frequently the targets of media biases, students often come into college not wanting to associate with their religion because of fear and uncertainty.

The fall 2019 Registrar’s Report states there are 13 Muslim students on campus. Shane Atkinson, the associate chaplain for Muslim life at Elon, thinks there could be many more.

Atkinson said he understands that fears and concerns play a part in the decisions students make to classify themselves as Muslim. As a result, Atkinson said he believes that students should never feel as if they have to be a part of a religious group on campus.

“I am aware that for some students, coming to college, from whatever their tradition may be, is an opportunity for them to step back and look at it more critically and to explore other traditions,” Atkinson said. “I let the students know that I am here to support them, but I don’t want anyone to think they are guilted into joining the Muslim student society.”

Atkinson sees the need for a strong community where students can feel supported in their faith and able to have more opportunities to come together. But he recognizes that a lot of students are people of color and practice a religion that “gets a lot of bad press.” Atkinson said he wants to respect student choices not to make their religion known on campus.

Irshaidat said she agrees that fear can deter students from identifying as Muslim, but hopes to offer opportunities and events to Muslim and non-Muslim students throughout the year.

The group plans to host three events throughout the semester. The first event is a biweekly Jumu’ah prayer in the Truitt Center followed by a grab-and-go food counter. Students are invited to participate or observe. The second event is a monthly speaker series where different topics within Islam will be discussed. Lastly, the group will hold “coffee hours” where students are invited to ask questions about Islam in exchange for free coffee.

Jan Fuller, Elon’s chaplain, said she is delighted to see students taking interest and initiative in creating EMS and shaping it according to their needs.

“It means to me that they are able and willing to help create the programming, support and even atmosphere that they need to thrive on campus,” Fuller said.