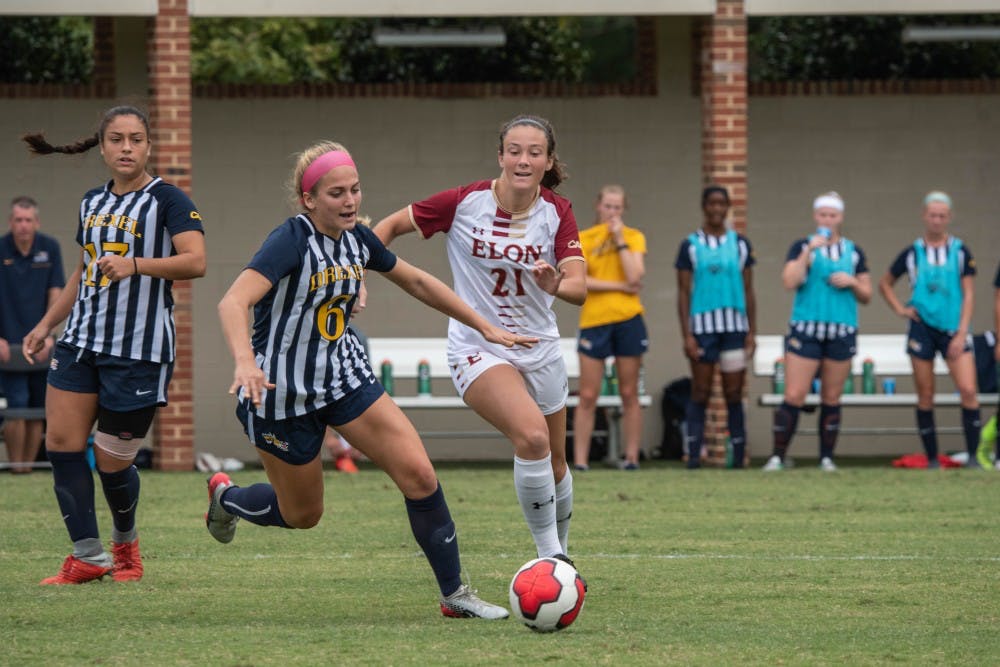 Entering the final month of the regular season, the Elon University women’s soccer team sits at 8-3-2 on the season, with a 2-1-1 conference record. A big contributor to the Phoenix’s success is junior midfielder Carson Jones.

Jones has already set a career high for goals, scoring five this season, which ranks her second on the team. Her season started with a bang when she scored her first goal, a game-winner, against High Point University in the second game of the year.

Jones said that she has struggled with change throughout her life, and the transition from high school to college soccer was no different. Jones said being around her team has helped with that adjustment.

“The biggest thing that helped was living with your teammates because it kind of gives you that automatic friend group,” Jones said.

Jones has started 40 games in her time at Elon. As an experienced team member, Jones said it is important for team leaders to make sure that younger players feel appreciated.

“The biggest part is just keeping the standards high, especially for the freshmen, but also making sure everyone feels as part of a team,” Jones said.

Neil Payne is in his second year as head coach of the women’s soccer team. Going into this season, Payne said that he set out goals for Jones.

“I felt like she’s good enough to influence more moments of more games because she’s capable of that,” Payne said. “In talking with her, one of the challenges this year is to not let anyone else steal the limelight.”

In the midst of a career season, Payne said that Jones’ impact on games has been key to the team’s success.

“We need her on the ball. We need her influence in the game,” Payne said. “What’s been important this year is that she’s been the difference between winning and losing.”

Payne also said Jones is well-liked among her teammates, and it is important to let her work ethic serve as a model for the rest of the team as “nobody outworks her.”

"We need her on the ball. we need her influence in the game. what's been important this year is that she's been the diference between winning and losing."

“Her standards are very high in terms of her preparation before the season starts,” Payne said. “She’s always one of our fittest players when she reports to training. So, she’s very professional. In that sense, she’s very disciplined.”

In 2018, the Phoenix went 1-7-1 in conference play, but are sitting at 2-1 this year. Jones said she likes the team chemistry this season and that this season could be a big opportunity for the soccer program.

“I think everybody’s goal is to make it into conference and kind of just prove ourselves,” Jones said. “We didn’t do so hot last year, so I think this year is our year to improve the program in general.”

With the end of the season rapidly approaching, only conference games remain on the schedule. After going 6-2-1 in non-conference play, Payne said Jones and the team are prepared for what is ahead.

“She’s had a great start to the season,” Payne said. “We’ve had some comparable teams in the non-conference schedule, but this will be a more difficult stretch for us, and she will prove that she’s good enough to win these games as well.”

Paul Jaskulski, owner of Paulie’s Pub and Grill, said he opened the bar out of a love for both cooking and college students. This is Paulie’s second consecutive year as the “Best Bar” in Elon.

Political science focuses on analyzing and researching politics, with many people focusing on domestic, international or policy affairs. A major that spreads across multiple interests and offers various career fields, political science gives students opportunities in government and politics.