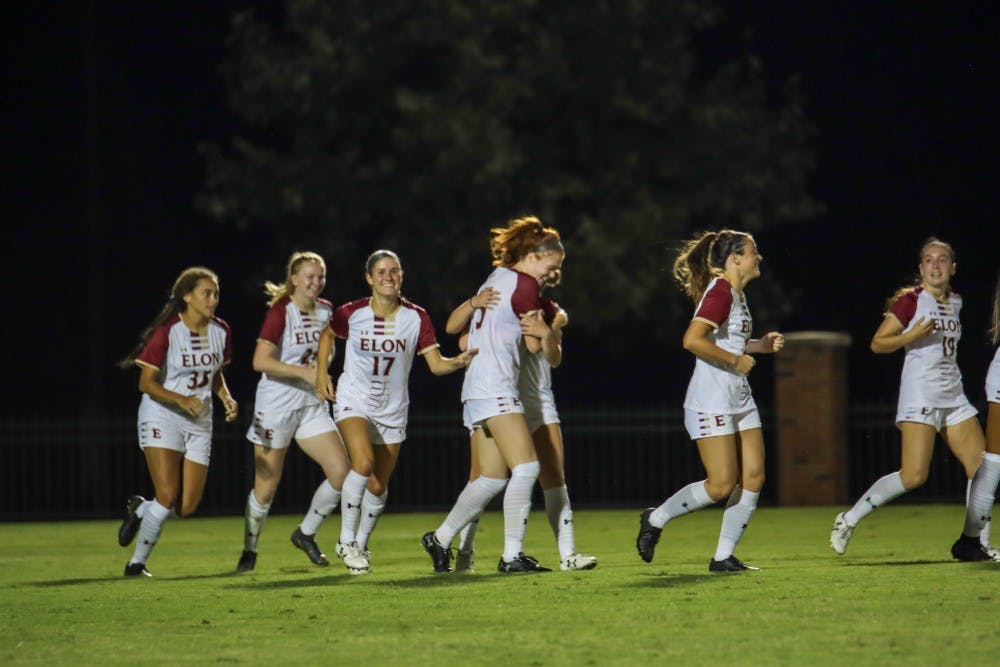 Both teams fought hard to start off the game but couldn’t finish big plays. Last year’s team MVP, junior midfielder Carson Jones, looked for opportunities to set up senior forward Breanna Mitchell whenever she could with crosses and shots that barely missed the net.

The match was the same at halftime as it was when it started, with both sides scoreless.

“We had two chances inside the six-yard box in the first ten minutes, and that was part of the game plan. We need to convert at least one of those chances, probably both,” Elon head coach Neil Payne said.

Elon cut to the chase with a goal just two minutes in the second half. Freshman midfielder Beky Myers lofted a corner kicked in front of the goal where five-foot, nine-inch sophomore defender Kayla Hodges used her length to head it into the net.

Just 10 minutes later, senior forward Taylor Paradoski made it 2-0 after receiving a perfect through ball from freshman forward Bethany Hartford for her fourth goal on the season.

But, William & Mary played aggressively and swung the momentum with two goals in the final seven minutes of play. Sophomore forward Renee Kohler assisted on both junior midfielder Colleen Norton’s deflection for the first goal and redshirt senior forward Sarah Segan’s rebound for the second goal.

At the end of regulation, the score stood 2-2.

“We’ve shown how resilient we can be. In the last ten minutes of the second half, there was a lack of focus and concentration. So we kept to the plan and had a specific plan in overtime,” Payne said.

In the first overtime, Elon found themselves with four straight corner kicks including a goal from sophomore midfielder Sarah Bevington that was called off due to a penalty in the box. Phoenix fans disagreed with the call and neither team scored in the first ten minutes overtime.

Getting the ball to start the second overtime, Elon executed right away with a goal by freshman forward Jessica Carrieri just 24 seconds after the overtime intermission. Carrieri ran for the net where she caught a perfect pass from Jones and finished into the bottom right corner of the goal. Her teammates stormed the field for the game-winning score.

“My game was just to get the balls behind and run to the channel so I knew once I had a clear shot, I could dribble up and take it to finish and that get that win,” Carrieri said.