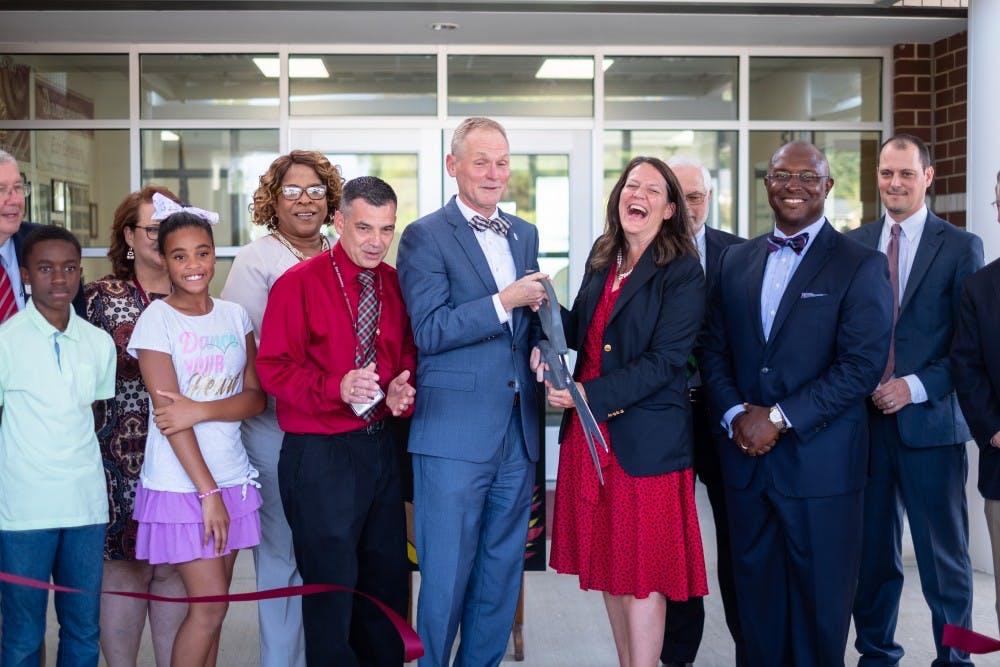 On a sweltering early October afternoon, the new Elon Elementary School building officially opened. Though teachers have already filled their classrooms with supplies and have started filling their students’ brains with knowledge, nothing is official without a ribbon cutting ceremony.

“This school represents an investment in our children’s children,” Elon University President Connie Book said. “It is the hope of a great economy that is driven by quality of life.”

Jack Davern, principal of Elon Elementary, seemed just as excited about the new building as everyone else in attendance.

“The excitement is up-and-down the halls every day. It’s in the classrooms, and I smile with joy each and every day,” Davern said.

In early 2018, the Elon Board of Aldermen approved a permit for Elon University to fund and build a new elementary school on property it already owned. Once construction on the new school was completed, ownership of the property was exchanged to the Alamance-Burlington School System.

According to Dan Anderson, vice president of university communications, the project cost the university close to $20 million. Elon University plans to tear down the old elementary school to expand its campus.

The university plans to build academic buildings and residence halls at the former elementary school location, 510 E Haggard Ave., just under a mile from the Inman Admissions and Welcome Center.

“It’s going to be an exciting time for them [the students] to have access to a brand-new school that’s modern in every sense of the word,” Anderson said. “That school had lived its useful life out, and I know they’re going to be very happy.”

The Elon Elementary project was a part of the university’s 2016 Campus Master Plan Update, a subsection of the 2010-2020 Strategic Plan.

The draft of the university’s 2020-2030 Strategic Plan, which is expected to be finalized by the end of this fall, focuses on fostering stronger relationships between the university and the town of Elon.

Two of the key objectives of the “connect” theme in the plan focus on deepening “the Alamance-Burlington School System partnership for literacy and degree attainment” and partnering “with the Town of Elon to develop a vibrant and energetic college-town environment.”

Jeff Stein, vice president for strategic initiatives and co-chair of the Strategic Planning Committee, said this initiative speaks to the university’s dedication to local communities.

“We heard all last year from students, faculty, staff, alumni and external partners about the importance of deepening those relationships,” Stein said. “We focused on education, health and economic development because those are the priorities that the communities, Guilford County and Alamance County, have identified as their most important needs.”

The ribbon-cutting on Tuesday, Oct. 1, represented the ceremonial opening of Elon Elementary. The construction of the new building and the official key exchange between the university and the elementary took place in early June. The building’s opening and the start of its operations began alongside other Alamance-Burlington School System institutions a little over a month ago.

Davern said enrollment increased by approximately 50 students this year, putting total enrollment at the school between 760 and 770 students.

“We fill the building,” Davern said, also noting that one of his favorite things to see at the new building is the reactions of his old students.

According to Davern, the first month of school for Elon Elementary in a new building was a time of constant questioning and anxiety. He said that faculty and staff spent the month working to sort out the logistics of the new space.

Despite difficulties regarding the move, the school has been able to make advancements in their academic programs.

Davern said the specialty classes, like art, music and innovation lab are most improved, already giving students renewed excitement and enthusiasm toward learning.

“It doesn’t mean that they’re not loving math and reading and the things that are going on in their regular classes,” Davern said.

Last spring, Davern said Elon Elementary had simply outgrown its old building on Haggard Avenue. One fifth grade classroom was located in a trailer located in the school’s parking lot. Art and music classes were also taught out of a trailer.

While the new building has not led the school to introduce any new clubs or after-school activities, Davern said it does provide more space for the school to improve on popular programs.

"The art teacher didn't have a sink at the other school, but she had a hose that came to the back if they needed water for painting."

“Everything that we were doing, we’re bringing here to the new site,” Davern said. “What we have more now is a little more space to stretch and to do the same things.”

One of Davern’s favorite improvements to the school is the innovation lab. The space was funded by a grant from Impact Alamance and is used for robotics and learning about technology.

“It began with an underrepresented population in the field, so it was a girls coding club that began one semester,” Davern said. “Well, then the boys were like ‘Hey, what’s going on and why can’t we do that?’ So, teachers responded, and then they started a boys coding club.”

Elon Elementary’s coding clubs went on to compete in nationwide conferences in cities across the United States including Chicago and Philadelphia.

Davern said working with the university, which oversaw the construction of the new building by Samet Corporation, was a unique experience.

“The communications that we had, particularly with Samet and builders, … was great,” Davern said. “They answered questions about … what [the] layout is going to be and [what’s] getting mapped.”

is approximately what it cost Elon University to construct a new campus for Elon Elementary School.

Davern said he worked mostly with the university’s architect Brad Moore and Director of Interior Design Holly Hodge, both members of the Planning, Design, & Construction Management office. He said the university and Alamance-Burlington School System formed teams to easily make decisions both parties could agree upon.

“We got to pick some of the color schemes,” Davern said. “So, that was exciting. And, so, it helped us to be involved in part of this.”

Davern said these teams were not the only ones watching the construction. The school’s playground was not complete when school started in August. Davern said the fact that students were able to watch construction of the playground progress makes the space more exciting.

One month in, Davern said he’s still trying to make sure the building is just right for his students, but comes to work every day excited to see what ideas his teachers will bring to the table to enhance the educational environment.

“I have so much to be thankful for,” Davern said. “I’m proud to be the leader of Elon Elementary.”