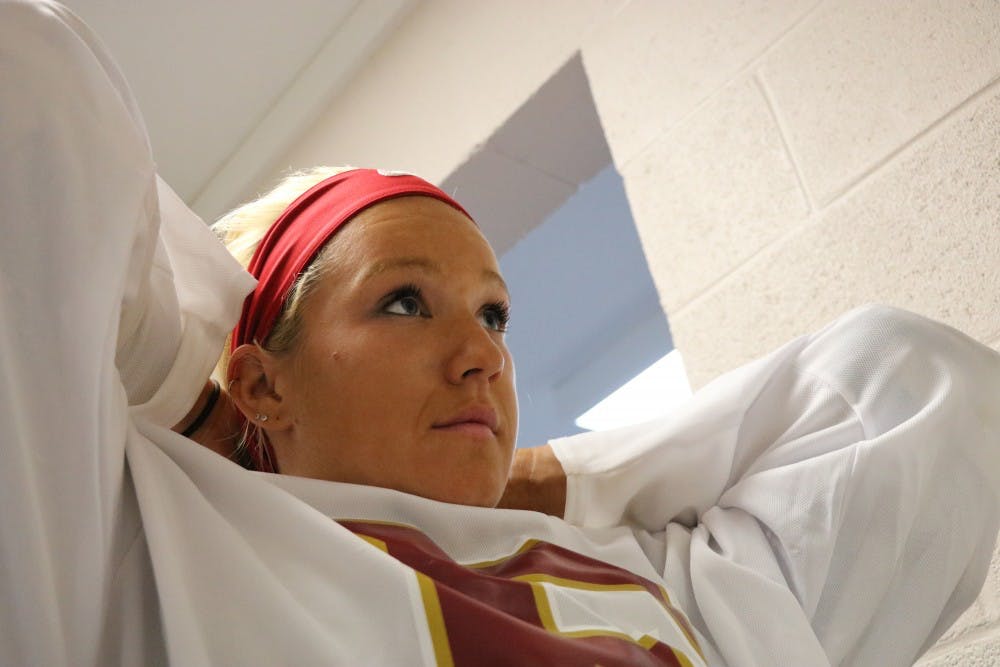 Photo by Amanda Gibson | Elon News Network
Sophomore Grace Moroney gets ready in her private locker room for practice with the club hockey team as the only female on the team.

Standing at 5 feet and 4 inches on the ice, sophomore Grace Moroney’s blonde ponytail is seen as she skates down the rink, which comes as a surprise to some fans.

“I love proudly saying I’m the only girl on the team,” Moroney said.

A Massachusetts native, Moroney has been playing hockey since she was three years old.

“I grew up playing with a rink in my backyard,” Moroney said. “I’ve played my whole life and I love it and it’s definitely a defining part of who I am.”

Being the only woman on a team of men isn’t new to Moroney. She played alongside boys up until junior high, which is when she joined an all-girls club hockey team.

Her biggest fan at every game and the person who taught her to play no matter who was on her team, male or female, was her dad, Jere.

Moroney keeps the note Jere wrote her in second grade framed by her bedside in her Danieley apartment.

“In it, he talks about really just having the heart and the speed,” Moroney said. “Regardless of skill set, if you want to be there and you love the game, it really doesn’t matter. I think having him and his support and you know, growing, with him as my coach, I do not hesitate in playing hockey.”

Moroney considered running cross country at Elon University but ultimately found her heart drawing her back to hockey because of the camaraderie of the team.

On one of her first visits to campus, Moroney met members of the club hockey team and immediately picked up on the closeness between the players.

“I knew it was an inclusive environment where certainly you have to fight for your respect and for your spot on the team,” Moroney said.

She knew she wanted to try out even though she would be the only girl.

“It was very intimidating at first, when you step out on the ice with 20 guys and being the only female,” Moroney said. “But the respect and support you get from the teammates, whether it’d be a boy or a girl, is the same.”

Sophomore Tom Lombardozzi, a teammate and friend of Moroney both on and off the ice, says she is the perfect addition to the team.

“She works just as hard as any other player out there and off the ice she’s cracking jokes with the rest of us,” Lombardozzi said. “Our team would be very different without her.”

Without fail, Moroney, Lombardozzi and the rest of the club hockey team can be found chatting away on the ground every Wednesday night at 10 p.m., waiting for the vans driven by their captains.

In the half-hour car ride to the rink in Hillsborough, Moroney usually sits on the floor of the packed van because of the amount of hockey sticks, helmets, pads and skates jammed into the van.

Despite having her own locker room, Moroney still gets in on the locker room banter the moment the vans leave the McMichael parking lot.

“It doesn’t make a difference, boy or girl,” Head Coach Paul Pechmann said. “Grace works just as hard as any player, and as long as she has the skills, she has a place on this team.”

Moroney relishes any opportunity to get on the ice and practice.

“We only get to practice once a week — so it’s something we all look forward to. The time doesn’t bother us at all,” Moroney said. “Honestly, I get pre-practice jitters each week and afterwards it’s the best sleep of your life.”

Despite the supportive atmosphere, Moroney says not all male players show her the same respect.

“I certainly have gotten that look, you know, being the blonde 5’4” girl out in the rink with all these guys who are primarily bigger than me,” Moroney said. “In fact, it just gives you more of an opportunity to capitalize on the fact that they didn’t expect that ponytail, to hit them and take the puck and go down the ice.”

"If you're a harDworking player who loves the game, you can play. it doesn't matter. That's something I'm proud to preach and to play with."

Moroney wants to use her position on the team to inspire other women to join her out on the ice.

“If I could leave an impact and leave something with being the only girl on the team, it would be to break that stigma and barriers,” Moroney said. “If you’re a hard-working player, who loves the game, you can play, it doesn’t matter. That’s something I’m proud to preach and to play with.”