Former Elon head coach reunites with Phoenix, beating it by 35 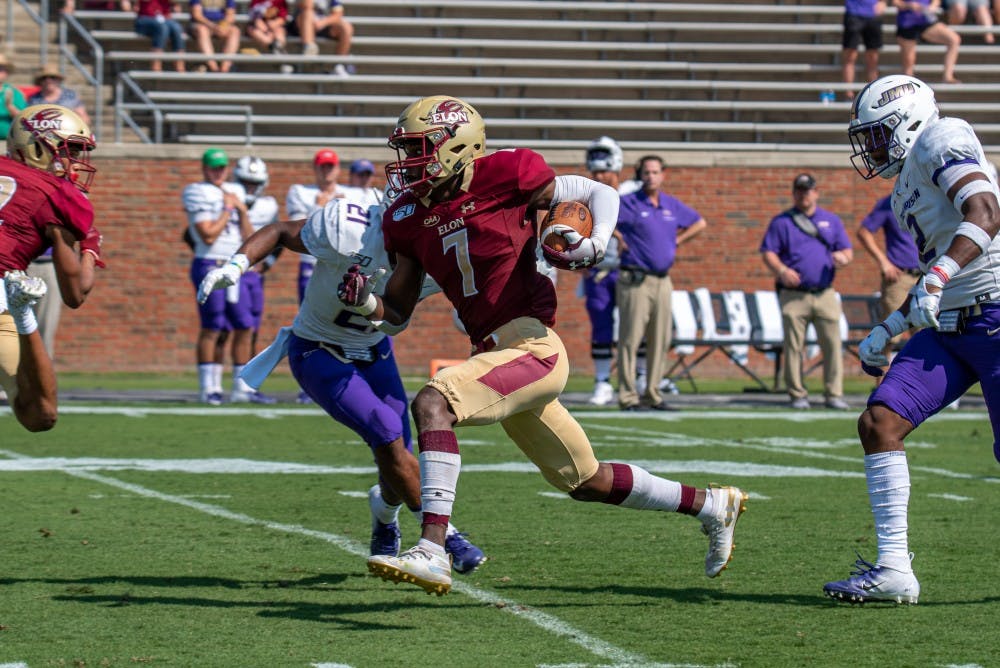 When the final whistle blew Saturday at Rhodes Stadium, James Madison University Head Coach Curt Cignetti took off his headset and made a beeline to the Elon sideline.

This was the first time Cignetti had seen many of the Phoenix players since his departure from Elon at the end of last season. Immediately after he resigned as the Phoenix football coach, many of the Elon faithful were up in arms about his transfer to an in-conference rival.

Yet when he crossed the field, he was met with respect. He shook hands with his former defensive coordinator, new Elon Head Coach, Tony Trisciani, and even embraced senior cornerback Gregg Liggs Jr.

"There's a lot of guys on the Elon football team that are going to be great successes in life and [these are]relationships I'll have the rest of my life."

“The game’s all about the players,” Cignetti said. “There’s a lot of guys on the Elon football team that are going to be great successes in life and relationships I’ll have the rest of my life.”

After the game, Cignetti said it was great to see his former players and coaches again. The former Phoenix play caller also expressed the difficulty of having to leave a program like Elon behind.

“My two years here were a great experience,” Cignetti said. “And I have nothing but great memories of my experience at Elon. But I had to do what was best for me and my family. And that’s what we did.”

In 2016, Cignetti took over an Elon program that was struggling to find its footing in its new conference, the Colonial Athletic Association. The Phoenix were 4-20 in the years leading up to the Cignetti era. Cignetti turned the program around completely, going 8-4 during his tenure and lead first ever Football Championship Subdivision playoff berth.

The following year, Cignetti led the Phoenix to the upset of the season when they defeated the No. 2 ranked Dukes in Harrisonburg, Virginia. The team went on to a 4-3 conference record and a playoff berth for the second straight year.

Not only did Cignetti help turn the Phoenix into a winning program, but he also helped build the bones of the Phoenix roster. Of the 102 players on the active roster, 76 were coached by Cignetti.

Cignetti not only bested his former team, but he destroyed them. The Dukes defeated the Phoenix 45-10 on the road during Elon’s Family Weekend. The Phoenix were dominated in the trenches throughout the game.

Cignetti’s signature rushing attack, which he established at Elon with the likes of Phoenix alumni Malcolm Summers and sophomore running back Jaylan Thomas, was prominent for JMU. The Dukes ran roughshod over the Phoenix to the tune of 336 rushing yards allowed and six touchdowns. This was the most rushing yards and scores Elon conceded this season. For senior and defensive captain Marcus Willoughby, this was a wake-up call.

“It was pretty much a lack of execution,” Willoughby said. “They just kept hitting the c-gap and the results showed. But this upcoming week, that’s our focus: getting better at setting the edge.”

The Phoenix offense struggled with the Dukes as well. After scoring on a 66-yard touchdown on its first drive of the game, the Phoenix were unable to generate more than a field goal for the rest of the game.

of the Phoenix's active roster trained under Cignetti.

Part of these struggles, once again, came in the trenches. The Phoenix returned only two of their starting offensive linemen from last year. A lack of aggressiveness resulted in JMU’s dominance up front. The Phoenix averaged 1.4 yards per carry for 33 total yards. The line also gave up five sacks against the Dukes.

Losing to JMU was devastating for the Phoenix. Not only was it a big loss in an emotional game, but it also dropped the Phoenix to 1-1 in the CAA and out of the FCS top 25.

The Phoenix will have a week to gather its team together and prepare to travel to New Hampshire University to take on the Wildcats on Oct. 5. The team has already faced the top team in the CAA, but they still have a challenge ahead of them.

The Wildcats bring a strong rushing attack that averages 192 yards per game which ranks fourth in the conference. Their attack is led by senior running back Evan Gray, who has 321 yards and a touchdown this year.

Trisciani said that after the matchup against the Dukes, the team would not dwell on the loss but rather prepare for the challenge ahead.

“We went into the game and talked about [how] it wasn’t going to define our football team whether we [had] won or loss,” Trisciani said. “We will prepare for New Hampshire and be a better football team next Saturday.”