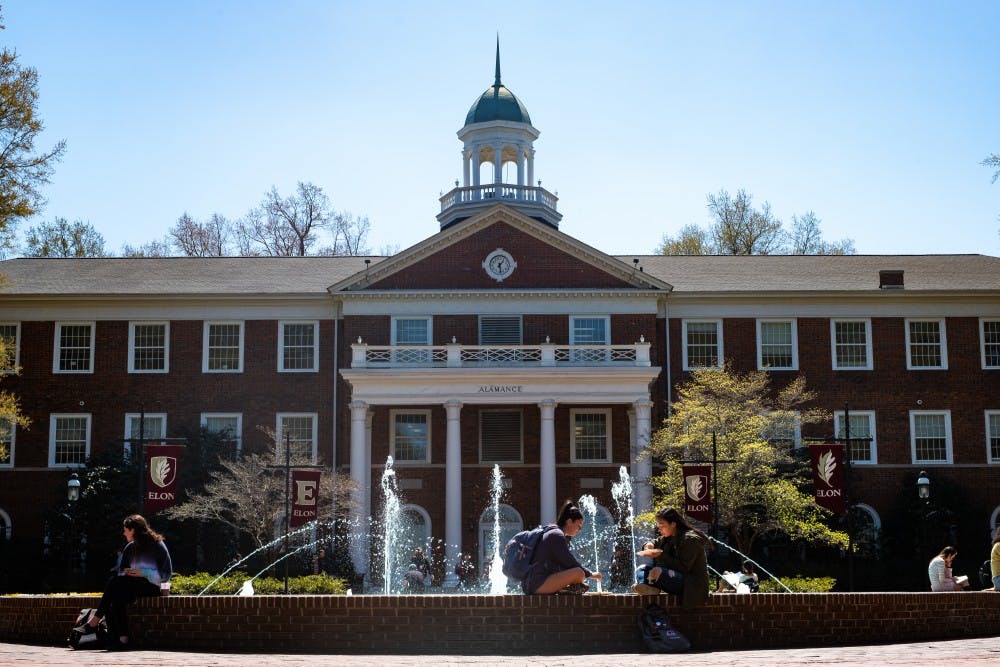 Students seize the opportunity to enjoy the sun in front of Alamance on April 3. [Liam O'Connor].

Correction: The graphic originally used in this article misidentified which majors were affiliated with which schools. The graphic has been removed. Elon News Network apologizes for this error.

It’s always been Geoffrey Claussen’s dream to expand the study of religion at Elon University. Now, in his eighth year as a professor of religious studies and second year as chair of the department, that expansion has been accomplished. The University Curriculum Committee has approved nearly 10 introductory courses, six being brand new, in the Department of Religious Studies.

“We hope that these introductory classes create a pathway to introduce students to the field of religious studies,” Claussen said. “Our department wants to make sure that first-year students are excited about an academic field that most coming to Elon might not know about.”

"The report is important because it provides a snapshot of the pulse of our institution. You can see where our growth is at and how much we have changed, semester to semester, and year to year."

The curriculum process Claussen went through began in February — taking nearly eight months to get approved.

“It is wonderful to have a faculty-controlled committee, where faculty can work with faculty to develop a strong curriculum throughout the university,” Claussen said.

The committee reviews two to three dozen proposals for new or revised majors and minors in a given year, according to Jason Kirk, chair of the curriculum committee and associate professor of political science and policy studies.

“Decisions to add structurally new university elements with important implications for the curriculum … are strategic decisions taken by university leaders in consultation with a wide range of stakeholders,” Kirk said.

According to Kirk, faculty initiative and student interest are critical for curriculum change.

On Sept. 18, the Office of the Registrar released its annual fall report, which outlines trends in Elon enrollment, religious traditions, state and country representation and majors.

“The report is important because it provides a snapshot of the pulse of our institution,” said Casey Hayes, assistant registrar for data management and reporting. “You can see where our growth is at and how much we have changed, semester to semester, and year to year.”

As overall student enrollment continues to grow, naturally so does the number of students in different majors.

However, 35 of the 83 active, transitioning and discontinuing majors listed in the Registrar’s Report showed a decrease in student involvement from last fall.

When analyzing the number of students in each major, it is important to note that the Registrar’s Report also accounts for the 512 students currently undeclared.

Additionally, the Office of the Registrar has confirmed the report counts each major of every student, including double and triple majors — there are 877 double majors and seven triple majors at Elon.

“We are a liberal arts institution. We want to see healthy enrollment in all of our majors,” University Registrar Rodney Parks said.

Astronomy and astrophysics are the two new majors offered this fall, both in the Department of Physics. In the past three years, three majors have closed: computer information systems, information science and public administration.

Hayes, who is in charge of compiling all the report’s data, is expecting a significant increase in the number of major declarations among freshmen and sophomores next spring. During the last academic school year, between fall 2018 and spring 2019 the number of undeclared majors decreased from 516 to 366.

The next Registrar’s Report is expected to be released in mid-February.