Freshmen Peter Wentzel gets the nod in goal for men's soccer

The first year has big shoes to fill 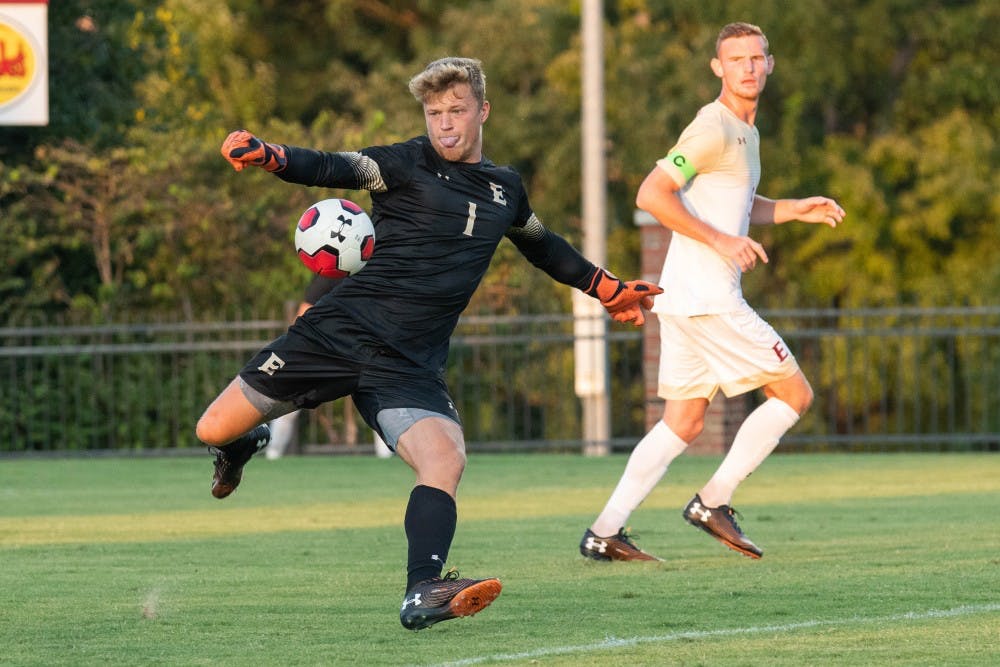 Last year, Elon University men’s soccer team graduated veteran goalie Matthew Jegier ’19, who had started and played in all but two games in his career as a Phoenix. He was named to the Colonial Athletic Association All-Rookie Team in 2017.

The familiarity of Jegier was never going to be around forever, something head coach Marc Reeves has been preparing for.

“We’re constantly having to turn over the team for the right reasons. Kids are graduating and going on to do amazing things,” Reeves said in an after-practice interview on Aug. 26. “Like anything, you know he’s leaving so you plan for it.”

Out of the three goalies currently on the roster, Reeves decided to give the starting spot to redshirt freshman Peter Wentzel. Wentzel did not play last season, but says he learned by watching Jegier and is ready to step in.

Lucky for Wentzel, Jeiger is still just a phone call away.

“Matt now lives in Charlotte. He’s nearby and works. I’m still talking to him on the phone quite a lot.” Wentzel said.

Wentzel steps into the role as the Phoenix attempts to bounce back from a less than successful season last year. After going 7-5-6 in Reeves’ first season with the Phoenix, the team fell to a 5-8-2 record last year. This was one of the few times Reeves has ever gone under .500 in his career.

This season, Wentzel has played in four full games, making a total of 12 saves in those games and giving up seven. His season high of saves came from the matchup against Rutgers University on Sept. 7 where he saved five shots in the 1-0 loss.

“If you look at Peter, his size and presence in the goal and his power in terms of his ability to cover both poles very well and go out on crosses very well makes him a very solid goalkeeper,” Reeves said. “His improvement just needs to be his game management in terms of his decisions and his distribution to continue to try and make sure we don’t put [the] team under any undue pressure.”

Questions started forming after the game on Saturday, Sept. 14 against James Madison University during which Wentzel gave up six goals in one half. At halftime, Reeves took Wentzel out and replaced him with redshirt sophomore Alex Lorne, who saved one shot and kept the Phoenix to just a 6-0 shutout.

“Lorne, I think, is an incredibly athletic shot stopper. He makes some incredible reaction saves and is very calm,” Reeves said. “He’s got decent size, but I think in modern college soccer the ball is in the box an awful lot, and being effective on his punches and catches and coming through traffic is something he continues to work on.”

Lorne’s performance in the JMU game gave Reeves a decision to make about who would start in the Appalachian State University game on Sept. 17.

“Anytime you give up six goals ... [there]needs to be some analysis and evaluation of the goalkeeping situation,” Reeves said. “We have spoken with all three goalkeepers and told them that [Lorne] will start versus App State. That’s a decision I’ve made based upon the scenarios.”

There are currently four goalies Reeves is keeping an eye on, although freshman Cam Pelle will be taking a redshirt year due to a shoulder surgery. This leaves Wentzel, Lorne and redshirt senior Sam Loeffler.

“Sam Loeffler has done a fantastic job in terms of being ready in training and making some fantastic reaction saves, big saves for sure,” Reeves said. “His general play in the goal can improve in terms of decisions and angles as to when to come out for certain breakaways or positioning in a goal to make more consistent saves.”

Though Reeves is giving Lorne a chance to prove himself against Appalachian State, the starting goalkeeper position is still up for grabs.

“Bottom line is we’re going to start Alex versus App State and see how he performs in the goal there and then reassess it again whether that’s at halftime or wherever that’s at the end of the game,” Reeves said.