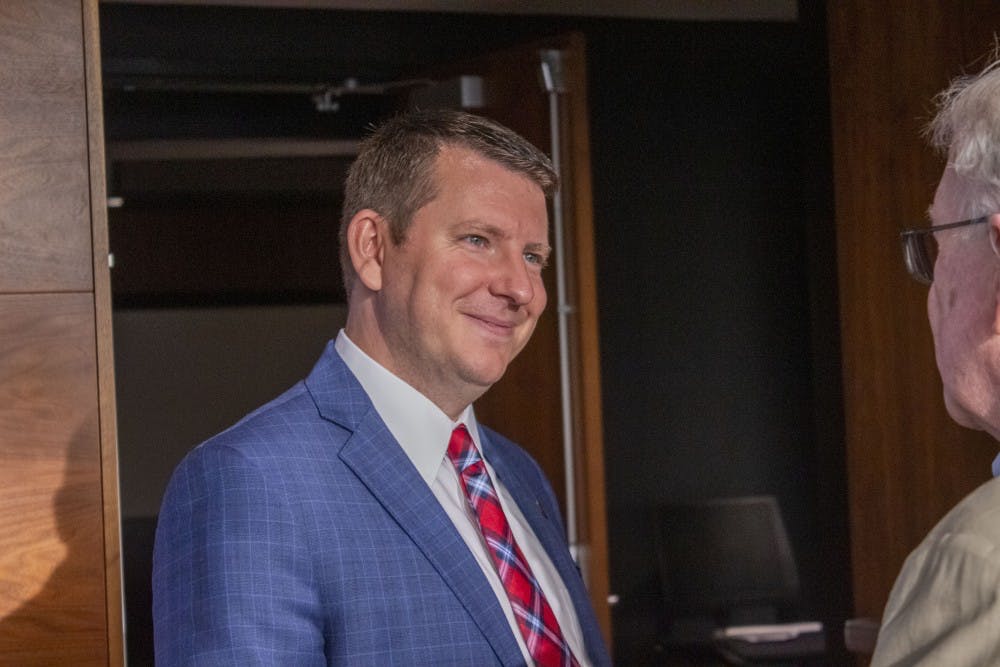 From Steve Young to Buzz Aldrin, Elon University’s campus is no stranger to prominent national figures.

Elon’s long history of distinguished guests is flooded with Hall of Fame athletes and Nobel Prize recipients- but some might be surprised to see foreign ambassadors included on this list as well.

Stein explained that Elon’s goal is to bring together students and the community high-profile candidates to enrich overall thinking and widen worldviews.

According to the Elon Speaker Series website, “this type of learning is at the heart of Elon’s innovative experiential learning model.”

Students often get the opportunity to ask questions during these events which allows them to expand their knowledge of different places, cultures and people.

Most recently, Jonatan Vseviov, Estonian ambassador to the U.S., spoke at Turner Theatre on Monday, Sept. 9.

Vseviov added his name to the ever-growing list of speakers and international figures to visit the university.

Vseviov has served as ambassador since 2018, specializing in defense and NATO initiatives.

He’s connected to Elon through a friend of the university and agreed to meet with classes and answer questions for students and staff during his visit.

Sophomore Anita Harkov is the only Estonian student at Elon. Harkov said that she often starts conversations with other students by explaining where the northern European country is.

“Most times, people don’t know- when I introduce myself when I say Estonia where that is, so I spend a lot of time explaining where it’s located. But I like that fact about Estonia, because it feels so good to be there.”

Harkov expressed excitement and joy regarding Vseviov’s visit, saying that she’s felt almost like an ambassador herself for the country over the past year.

“Of course it’s an honor to be here, and I feel sometimes I am kind of representing the country in terms of most people have not ever met an Estonian person.”

Vseviov prioritized talks of cybersecurity and Western unity throughout his presentation, as well as commenting on Estonian-U.S. relations.

“You should always, always pay very, very close attention to what the canary does when in a coal mine, and ladies and gentlemen, we all are in a coal mine.” Vseviov said, commenting on current national security concerns about cyber attacks.

Estonia, a country that suffered a massive cyberattack in 2007, is also one of the most digitally advanced societies in the world.

Vseviov spoke about their security priorities regarding their digital state.

“Security must be, and is, a top priority,” Vseviov said.

"Security must be, and is, a top priority."

Estonian Embassador to the United States

On Estonian-U.S. relations, Vseviov said that relations were “very close”, and that “We have never forgotten the fact that the United States never recognized the illegal occupation of Estonia.”

Until 1991, when Estonia regained independence, the representative in the U.S. State Department was the longest-serving diplomat in the United States according to the Ambassador, illustrating the long-term alliance between the two nations.

Vseviov closed by calling upon Elon students and the surrounding community to be involved, stating that the fate of alliances and global society is in the hands of the next generation.

Elon plans to welcome even more guests in the future. This year, Elon’s Speaker Series theme is “Quest for Truth.”

Alex Wagner, the author of Elon’s common reading “Futureface,” former U.S. Ambassador to the U.N. Nikki Haley and writer-activist Zachary Wood are all scheduled to appear on campus.