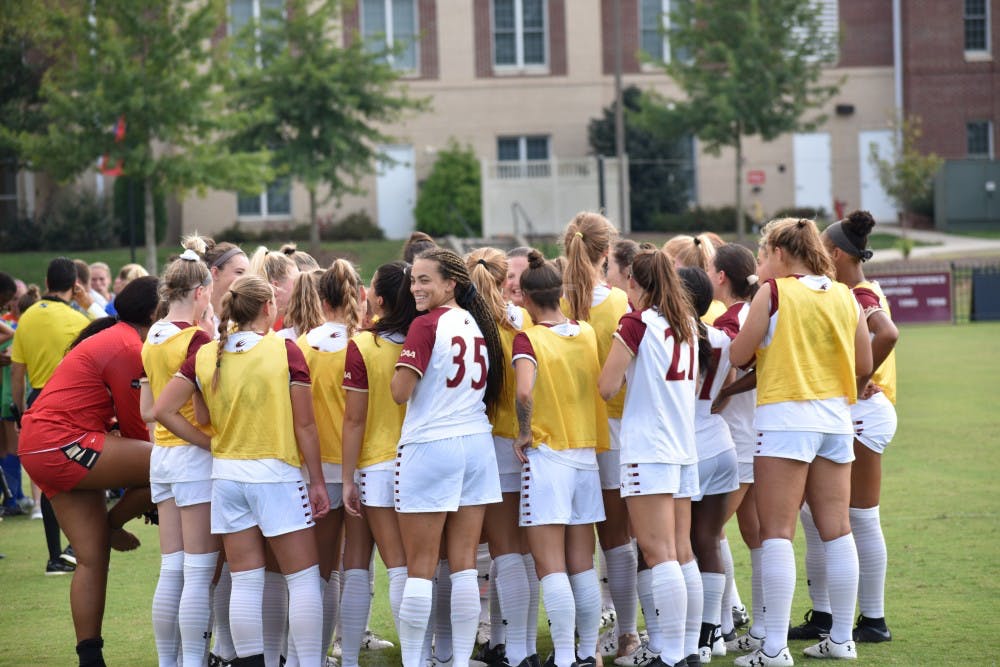 
Sophomore midfielder Samantha Dominguez turns around during the team huddle before the game versus UNC Asheville on Sept. 8, 2019.

The Elon University Phoenix took on the University of North Carolina at Asheville Bulldogs (1-4) and won 5-0, pushing their record to 5-1 for the first time since 2015.

The Bulldogs came out struggling to connect on their passes despite the ideas being there, and the Phoenix weren’t giving them any breathing room either. A fiery defense was everywhere the Bulldogs offense went, something that head coach Neil Payne was pleased about.

Sophomore midfielder Sarah Bevington started off the Phoenix with her first goal of the season. The goal came from a free kick taken by redshirt junior midfielder Hannah Doherty, who crossed the ball into the middle of the box for a perfectly paced tap in by Bevington.

The scoring for the night was capped when a penalty kick was converted by junior midfielder Olivia Kraebel, her first goal of the season, with less than three minutes to play in the second half.

“It’s perfect, everybody needs to chip in,” Payne said. “It's a sign of a good team that we're having a lot of players get on the scoresheet.”

Despite feeling sick earlier this morning her counterpart, Elon freshman goalkeeper Katrin Hauksdottir had a much easier night only facing two shots on goal.