Payne wants a better second year at the helm 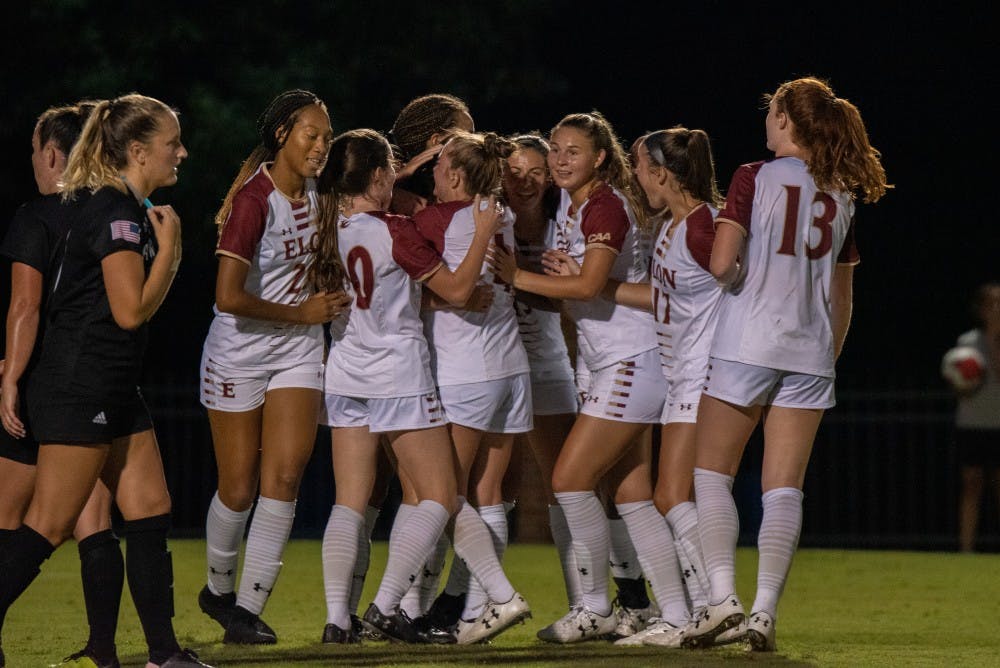 The Elon University women’s soccer team joined the Colonial Athletic Association (CAA) in 2014. Going into their fifth season in the league, the Phoenix have yet to break into the top half of the standings. The teams’ highest ranking at the end of a season came in 2017 when they finished seventh out of 10.

Their ranking for the other four seasons: dead last.

“Well, there’s no doubt that the conference is a step up in weight, it’s a step up from class, good teams, nationally ranked teams,” said Neil Payne, head coach, about the transition the team faced going into the CAA.

The Phoenix graduated four seniors last year, one being Tori Baliatico. In her last season, Baliatico played and started in 17 out of 20 games and ranked third on the squad for goals scored. Her freshman year, she was named to the CAA All-Rookie Team and the following year was given a preseason All-CAA Team honorable mention.

“We relied heavily on one or two players last year,” Payne said.

However, the nine freshmen Payne added to his roster this year are credited by junior keeper Valentina Estrada as “having their heads on straight.”

“I think the new freshmen class is actually really exciting, because they all have something different that we need on this field,” Estrada said.

“The squad is chipping in this year, which is obviously beneficial,” Payne said.

Of the nine, Payne has already started four of them in matches against High Point University and Canisius College. Hauksdottir started in the goal for both games, along with Myers. Harford has already added a goal to her name against Canisius in the 94th minute to secure the victory for the Phoenix. Jessica Carrieri played for 52 minutes in the game against High Point, and created absolute havoc for their defense. Her impeccable control and speed was difficult for the Panthers to adjust to, and Carrieri collected four shots out of the Phoenix’s 15 total shots on goal.

Payne spoke about the standards he’s making in order to hold his team accountable.

“The message to the team from day one is we’re not going to lower our standards,” Payne said. “We played some good soccer last year, but we weren’t solid enough in key areas of the field.”

"The message to the team from day one is we're not going to lower our standards."

This is an error Payne is determined not to see the team make again.

“I can see the shift in mentality already. The challenge there is we just, we got to keep improving,” Payne said. “We’re right where we need to be, still wanting to improve, but I’m certainly happy with the progress we’re making. We’re not getting carried away.”

Payne’s message has come across already. The team’s shown large improvement from last year, and have made the best start since their transition into the CAA. Including their exhibition games, the Phoenix have won their first four games and haven’t given up a goal in any of them. The closest they’ve come to that has come three times, once in 2014 (3-1), 2015 (3-1) and 2017 (3-1). In 2014, they went without conceding a goal until they lost to Appalachian State University 1-3.

When asked if she felt pressure to break the losing streak in the league, Estrada said that she felt just the opposite.

“I think all the pressure stays with the people that have made it. What is our pressure? We haven’t ever made it,” Estrada said. “Honestly, we’re flying free right now and just trying to get to the next level.”

Payne enters his second year as head coach for the women’s soccer team. Payne said that there “was always going to be a transition” when he stepped into the head coach role, but that “this group of players has fully bought in” to what he and the rest of the staff are trying to accomplish.

“I’m proud of the way they’re working, we showed one thing tonight that we didn’t show last year, and that’s a lot of character,” Payne said, after the game against High Point.

“We have a really good team chemistry this year. Not that we haven’t before, but this year, we’re just connecting,” Estrada said. “I think that is really why our standard has been able to be raised because we all understand that like there is a goal here. We’re all really in it together.”

Rest of the season

The next game for the Phoenix will be against the Radford University Highlanders. Last season they lost to Radford 1-3, but the Phoenix actually outplayed the Highlanders 19 shots to 14.

A classic rivalry between Elon and James Madison University will be another anticipated game for the Phoenix. Elon has not beaten the Dukes in their past five meetings (0-3, 0-1, 1-3, 0-1 OT, 0-1 OT), but this year could be the match that turns it around if Payne can keep up this momentum.

The Phoenix will have seven more out of conference matches until they engage in their first CAA match against University of North Carolina at Wilmington. The Seahawks have been one of the Phoenix’s more competitive opponents, two of their past five matches going into double overtime and one going into single overtime (2-2-2 OT, 1-1-2 OT, 1-2 OT, 0-2, 0-2). The Seahawks have played three games, including one exhibition game, and have also gone undefeated in their matches. They’ve had two total goals scored on them, one against Richmond University and one against Furman University.

Payne has challenged them to not loosen their standards, and to keep bringing out the best of themselves as players and people. They are challenging each other to make it to a tournament run, and to have a winning season. The team is shaping up to be successful. The freshmen are ready to step up and the upperclassmen are ready to lead and support their team as best as they can.

This could be the year that Payne and the Phoenix turn their luck and record around.