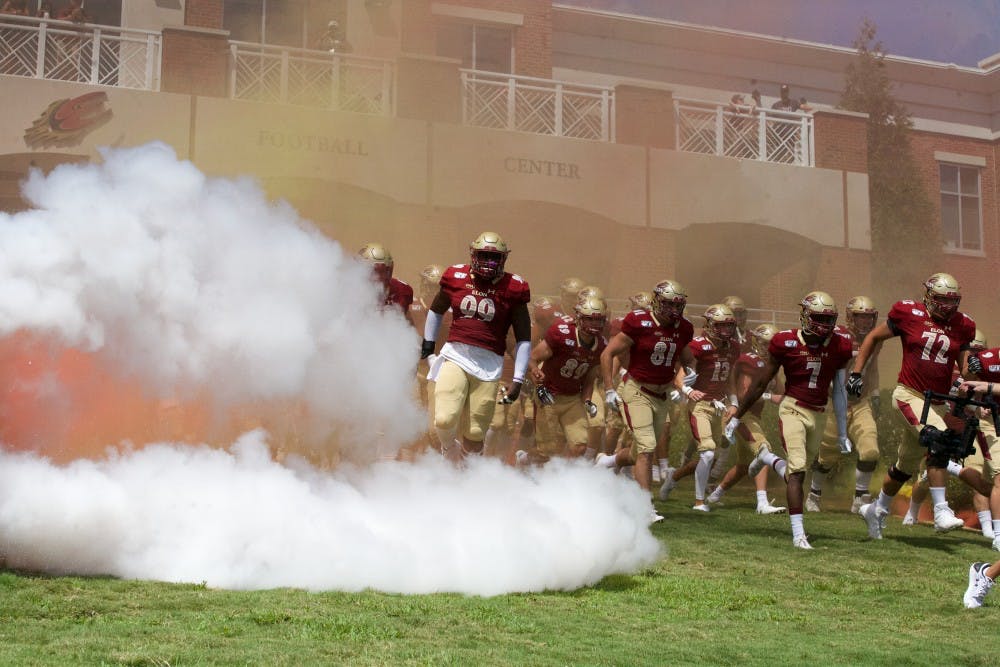 
Elon football takes the field for their first home game of the year on Sept. 6, 2019.

The Elon Phoenix won its first game of the season against the Citadel University Bulldogs 35-28 in its home opener. After the Phoenix dropped out of the national rankings with its opening-week loss against North Carolina A&T, the Phoenix are looking to get their first win of the season, and Trisciani’s first win as head coach.

Though the Phoenix came out with the victory, it was not a clean one by any means. The Phoenix special teams were challenged, with  two blocked punts, one scuffle on a punt return that overturned a Phoenix touchdown, and an unsuccessful attempt at recovering a Bulldog onside kick. What could've been a comfortable Phoenix victory against a competitive Citadel team, simply came down to a lack of refinery on the special team's end.

"We came out last week saying we needed to do a better job in the run game, protecting the quarterback, and getting the ball out of our hands," Trisciani said. "This week we have to do a better job with our punt protection and our special teams operation."

Although the special teams struggled, all other aspects of the Phoenix team improved tremendously just from last week's game against North Carolina A&T. Against the Aggies, the Phoenix rushed for a total of 19 yards, whereas today's game ended with 255 yards, over half of it coming from sophomore running back Jaylan Thomas, who racked up 135 rushing yards.

"You know, one thing we got to understand is last week, we played six off offensive lineman. Four of them were playing their first college snaps," Trisciani said . "Those guys worked their tails off this week and I think that they did a great job."

The first special teams blunder occurred with two minutes left in the first quarter, when redshirt-junior Hunter Stephenson’s punt was blocked by Bulldog redshirt sophomore safety Sean-Thomas Faulkner, and an illegal touching penalty was tacked on against the Phoenix afterwards. The Bulldogs started on the Elon 14-yard line, and finished out the quarter on the Elon four-yard line.

The Bulldogs took two plays to put their first six points up on the board to open the second quarter. Bulldogs junior quarterback Brandon Rainey ran the ball in from a yard out to complete the drive, and tie the game at seven.

The slight breakdown was shrugged off right away by the Phoenix. Thomas broke a 39-yard run before finally being pushed out of bounds to start the drive. This time, a penalty went in Elon’s favor when the Bulldogs were called for a late-hit personal foul by Faulkner. The drive was then completed by junior wide receiver Kortez Weeks, who hauled in a 27 yard pass from Cheek after busting free from his defender to make the easy catch.

The Bulldogs went three and out, and the Phoenix capitalized. Cheek, who was looking more comfortable as the game went on, kept the ball himself for nine yards to get the ball to the Citadel 10 yard line. Thomas completed the 11-play drive, and the Phoenix put another seven points on the board with Davis’ successful extra point. The Phoenix ended the first half in high spirits, leading 21-7.

The Citadel and Elon both went through two uneventful possessions to open the second hald, but on the Elon punt back to the Citadel, the special teams were put under the spotlight once again.

Stephenson punted the ball 54 yards, and a fumble was forced against the Citadel in which the Phoenix had recovered it. However, eyes weren’t on the fumble recovery, but instead on a fight that had broken out between McNair and Citadel’s Faulkner. The scuffle was broken up by not one, not two but three referees, and ended in a McNair ejection. Meanwhile, the Phoenix had run the ball in for a touchdown, but because of the fighting penalty, the touchdown was taken back and the Bulldogs got the ball back at the spot of the foul. McNair is now also ineligible to play in the first half of next weeks game again the University of Richmond.

"We got to do a better job with our discipline and with our poise, I love the passion but you have to be poised and you got to be disciplined," Trisciani said. "You gotta understand that any action you do affects the whole team and that's important."

Thomas, who had had a stellar game already, wasn’t ready to quit. He ran in the ball in 20 yards, which pushed his rushing yards for the day over the century mark. The clock expired on the third quarter, and allowed both high strung teams to take a breath before going into the fourth quarter.

Junior quarterback Davis Cheek was heaping praise on Thomas his running core after the game.

"He and all the backs do a great job," junior quarterback Davis Cheek said. "He saw some things that he wanted to correct and that's what he did."

The Bulldogs came out flying, driving down the field practically unstopped, and Rainey got his third touchdown of the day to make the game just seven points apart once again. The Bulldogs decided to lineup for the onside kick, which they successfully recovered on their own 49 yard line. Rainey’s throw to junior wide receiver Raleigh Webb was incomplete, but a pass interference call was made against the Phoenix to bring the ball to the Phoenix 36-yard line. Webb caught a 27-yard throw by Rainey to make the game all tied up, 28-28, with nine minutes remaining in the fourth quarter.

"I think it goes to show that they really fought hard," Cheek said. "They made big plays when they needed to and that's really what kept them in the game. We talk about it all the time, how there's four or five plays that could really change the game, but I think what was most important is that we responded well."

Junior Brelynd Cyphers, the third string running back, was the next Phoenix to get his name on the scoresheet. In the next Phoenix drive alone, Cyphers rushed for 53-yards, his touchdown run making up for 30 of them. An ecstatic Cheek ran up to Cyphers as Davis successfully kicked the extra point to put the Phoenix back up ahead with six minutes remaining in the half, 35-28.

"I just knew I wanted to win," Cyphers said. "I didn't really care what came with it, I knew we needed the win and I did my part."

The Phoenix recovered the ball after the Bulldogs failed to convert on fourth down, and worked to drain the clock for the remainder of the game. With eight seconds left, the Phoenix took a timeout when they had 4th and 4 to go. The Phoenix needed to snap the ball, and they needed to make some sort of play to end the game.

The snap to Cheek was thrown out of bounds with one second remaining; a scenario the Phoenix had seen just the week before against North Carolina A&T. The pass by Rainey was intercepted by Elon with no time left, and the game was over. Elon celebrated their first victory of the season, and Trisciani could take a breath with his first win under his belt as well.

The Phoenix will next take on the Richmond Spiders in Richmond (2-0), which will be their first CAA matchup of the season.