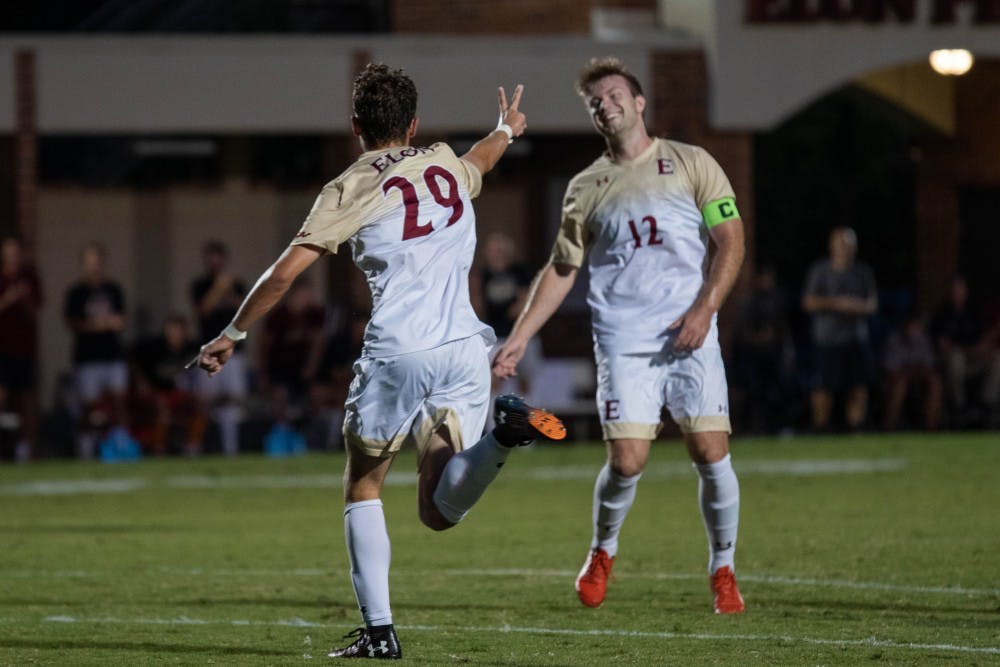 The Elon University Phoenix (2-4-1) faced off against the University of North Carolina at Greensboro Spartans (2-5) and defeated them 3-0 in their second straight home win.

The Phoenix came out firing from all angles, looking to make plays right away. It was freshman forward Burl Shepard who served as a spark plug for the team in his first start of the season. He converted his first goal in the maroon and gold with a sliding shot near the right post off a pass from senior captain John Walden.

But the 5-foot, 10-inch freshman was not done from there — just two minutes later he struck the back of the net again with a powerful shot from just outside the box. Shepard found an angle on net and ripped it, soaring the ball past UNCG’s sophomore goalkeeper Ricky Zarri. Elon led 2-0 at the half.

“I just wanted to work hard, do the things I did right to get the start and repay the faith,” Shepard said.

Elon didn’t let up to start the second half with a strong defensive line that didn’t allow a Spartan shot for the first 12 minutes of play. Senior defender Luke Matthews started once again tonight after an injury that had him out to start the season. Matthews, alongside senior defender Caner Snover, helped protect the net throughout the entire game.

In the 61st minute redshirt freshman midfielder Jalen Weatherspoon leaked out to the left side and make a soft touch on a floater to set himself up with the ball. Weatherspoon dribbled once before finishing with a strike that laced the bottom left corner of the net, his first goal of his career.

UNCG did all they could in the final minutes with senior forward Faisal Almubaslat attempting a number of shots that failed to get past Lorne. The clock ticked slowly and Elon contained the ball well to help them move onto 3-4-1.

The Phoenix will travel north to take on the University of Delaware (1-3-2) on Saturday, September 28 at 7 p.m.

Elon in LA, one of Elon’s Study USA experiences, allows students to explore the city of Los Angeles while continuing to earn credits for their major.