A renewed push to open depot closed for nearly 60 years 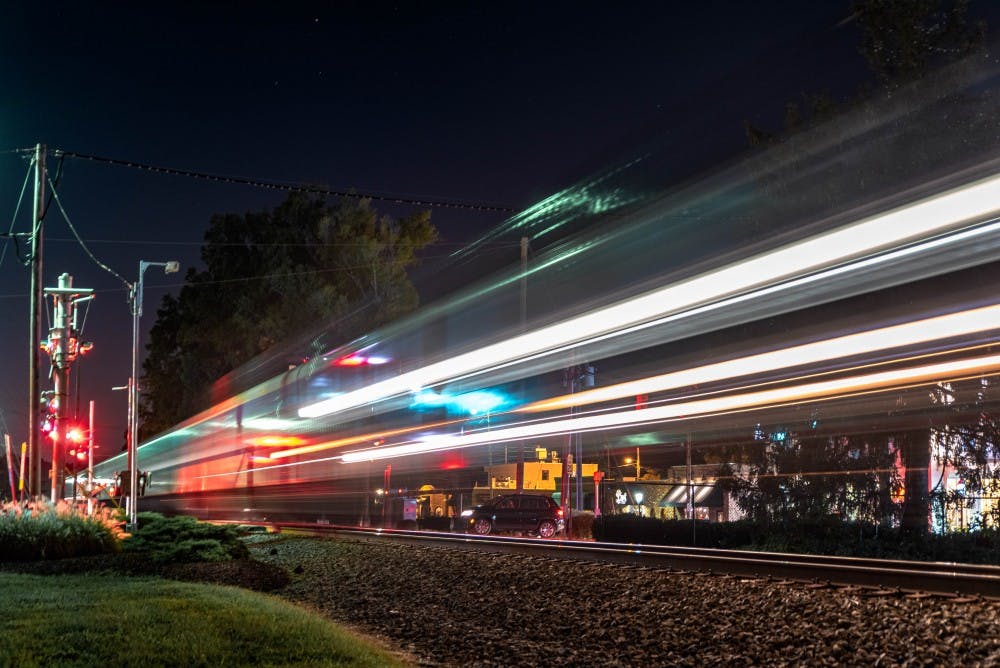 Every town has its ghosts. Elon is no exception. We live our lives accustomed to the banshee scream that calls out to us, reminding us of a past long gone by. We hear the whistle and the wind rushing through the churning wheels, but very few of us stop to wonder what story these sounds are trying to tell, or the vibrant past from which they originate.

Elon’s train depot may have closed in 1961, but the connection shared between the railroad and the university still remains. Now, almost 60 years later, more and more members of the Elon community advocate to reopen the depot in what is sometimes known as the Elon Train Committee.

Assistant Professor of Philosophy Ryan Johnson has been interested in the cause since he led an “audio environment” activity during his first Elon class.

“I heard a number of things and one was the train, and it was a constant,” Johnson said of the responses during the activity. “So it’s part of our audio environment.”

According to Johnson, this led to the realization that Elon’s connection to the train might go beyond the sound of the whistle, and he began his journey with the Committee.

"I started looking into the history of Elon and found that one of the main reasons why it is located where it is and developed in the physical way that it has is because of the train stop."

“My specialty in philosophy is always to go to history,” Johnson said. “I started looking into the history of Elon and found that one of the main reasons why it is located where it is and developed in the physical way that it has is because of the train stop.”

The train depot formerly known as “Mill Point,” built in 1887, originally provided rail service to nearby textile mills, according to Don Bolden’s book, “Images of America: Elon.” Later on, the depot would come to serve commuting students and staff.

According to university archivist and assistant librarian Libby Coyner, another member of the Elon Train Committee, the presence of the depot heavily influenced Elon’s early development.

“It used to be that the university was really oriented toward the train tracks and so you would have gone in and out on the other side of Alamance,” Coyner said. “The part where the fountain is now was once a parking lot. … It’s interesting how our history is tied up with that train.”

Johnson says that the closing of the depot in 1961 led the university in a different direction.

“We got rid of the train and turned it into parking. And that basically made us a campus that is almost completely dependent on cars, and thus made it very difficult if not impossible to get other forms of transit to get here,” Johnson said.

In his essay “Bringing Back the Elon Train Station,” Johnson argues cars are at least partially to blame for things like obesity and climate change. He emphasized in an interview that the goal of reopening the depot would not mean opposing cars.

“I think the word here is additive,” Johnson said. “You can add options to how you move through the world. It makes you, ideally, more free.”

However, the process of adding the option of an Elon train depot might not be so simple.

Following the closing of the Elon train depot, the Cary train station was torn down in the 1970s, according to Amtrak. After being rebuilt in 1996, the station experienced increasing demand until its 2011 expansion. While the Cary station is now fully equipped with a waiting room and checked baggage availability, it was a process that took several decades to complete.

“A train stop is at least ten years away, if that,” Johnson said. “So, there’s a lot of things that need to happen. The most immediate thing would be connecting to the Burlington station.”

Sitting approximately 4.6 miles away from the Inman Admissions building — an 11-minute drive — lies the Burlington Amtrak Station. While it does not include amenities such as checked baggage and Wi-Fi, it does include a waiting room and wheelchair accessibility.

The close proximity of the Burlington station to Elon has posed one of the biggest threats to the train station initiative: Amtrak does not build stations less than 15 miles apart, according to Coyner.

Amtrak could not be reached to confirm this information.

According to Johnson, however, a growing need for alternative transportation might help the initiative get off the ground.

As train ridership increases, the North Carolina Department of Transportation has invested in infrastructure.

In an August press release, the NCDOT announced that its Rail Division was to receive $77 million “to upgrade its fleet of passenger rail cars.” The money, awarded by the Federal Railroad Administration, would allow NCDOT to replace the oldest of its rail cars.

“One reason NCDOT is so interested in us is because if people are riding transit before the age of 21, they’re much more likely to later on, so … NCDOT is very interested in getting young people to ride transit,” Johnson said. “So, if we can demonstrate consistent and high numbers of ridership and usage of this, then they’re going to help us make it happen.”

Making it happen will be a complicated process, according to Elon University’s Chief Financial Officer Bob Shea, who says that while many Elon University officials are supportive of the idea, the university cannot be financially involved in the project.

According to Kathleen Patterson, the town of Elon’s downtown development administrator and Pamela Graham, assistant town manager and planning director, if in the future a NCDOT study produces quantifiable evidence that Elon does need a train station, the cost would be shared by several parties.

“If it’s a public structure in the town, it is highly likely the town would have to maintain it,” Patterson said. “If it’s a true depot, you know, you have bathrooms and water and sewer issues, so that would probably incur costs to be built but also maintained as well.”

It is impossible to predict the size of a financial impact on town of Elon taxpayers, according to Graham, other than the fact that “there would certainly be one.”

For the Gilmore family, who reside in the town of Elon, a train station could be a worthwhile investment.

“We think having a train depot in Elon would have a positive impact on the town and would be especially good for the students,” said Joel and Angie Gilmore in a joint statement. “We believe the students would embrace the idea of using mass transit for travel, both for convenience and for environmental reasons. Depending, of course, on the amount of tax money required, we would not be opposed to helping fund it through taxes.”

Their daughter Kara agrees the impact on the town could be positive.

“I’m from Elon, but I don’t go to college there, and as a student who goes to college in a town with a train station, I think students would really utilize it,” Kara said.

The use of the station, according to Graham, might be a “double-sided coin.”

“It could draw people out of the town to go other places to eat and to shop and those type of things as well, but it could also bring people in to go to a particular shop,” Patterson said, pointing out the impact a train station could have on tourism.

"One way to match the goals of the university, as well as the goals of things like climate goals for ensuring the future of Elon, is to do what we can to become more environmental.."

“One way to match the goals of the university, as well as the goals of things like climate goals for ensuring the future of Elon, is to do what we can to become more environmental. A train seems like the most obvious way to make that happen,” Johnson said.

According to Shea, a goal for Elon University is to become carbon-neutral by 2037. The increased use of commuting by train might help in accomplishing this goal, as 43% of Elon’s 2018 greenhouse gas emissions were credited to transportation, according to Elon Sustainability.

While the Elon Train Committee does not have official plans to meet in the near future, Johnson and others are hopeful to inspire students and staff to spread the word.

“When you start telling people about it, you start to see how interesting it can be, how advantageous to everybody it can be,” Johnson said. “How do you move forward? We do that by connecting to our roots.”