Wake Forest racks up nearly 300 yards passing in first half 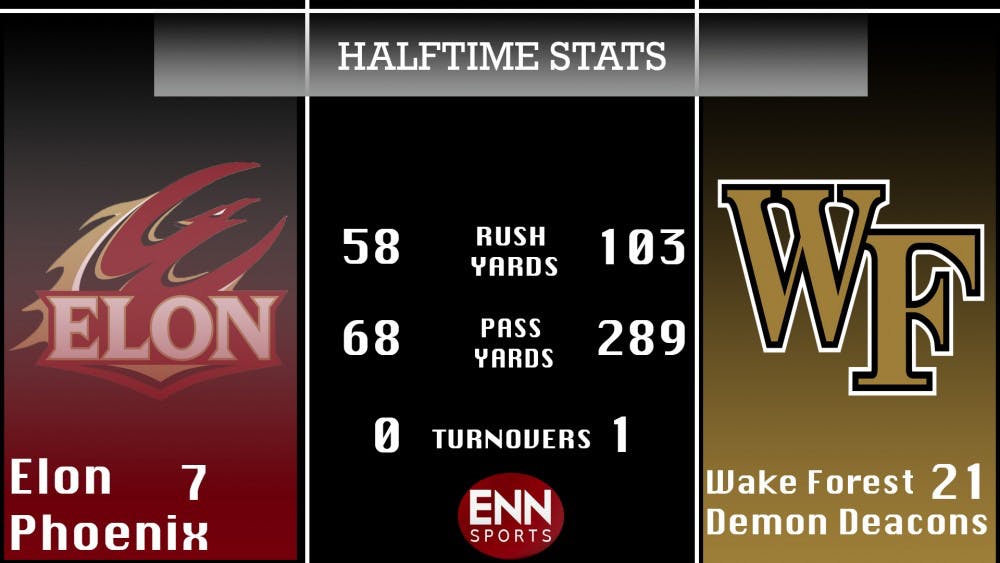 
First half stats from Elon at Wake Forest.

After Wake Forest took a 14-0 lead, the Elon offense found the end zone with less than a minute left in the first quarter. Junior quarterback Davis Cheek connected with sophomore wide receiver Avery Jones on a 40-yard touchdown pass to make the score 14-7. The offense struggled throughout the rest of the half, being forced to punt the ball five times.

Junior Quarterback Davis Cheek launches a bomb to Sophomore Wide Receiver Avery Jones who gets behind the defense and cruises into the end zone for a 40 yard touchdown.

Phoenix trail 7-14 with 0:57 remaining in the first quarter.

The Demon Deacons came out firing in the second quarter on a 5-yard touchdown to redshirt-sophomore wide receiver Sage Surratt, extending their lead to 21-7. This was Wake Forest’s third consecutive touchdown drive of the game.

The Phoenix defense prevented a fourth straight touchdown when senior defensive back Daniel Reid-Bennett intercepted Wake's redshirt-junior quarterback Jamie Newman in the end zone. It was Reid-Bennett’s second interception of the year.

After allowing a 48-yard touchdown pass with less than a minute left, the Phoenix went into the locker room down 28-7 at halftime.