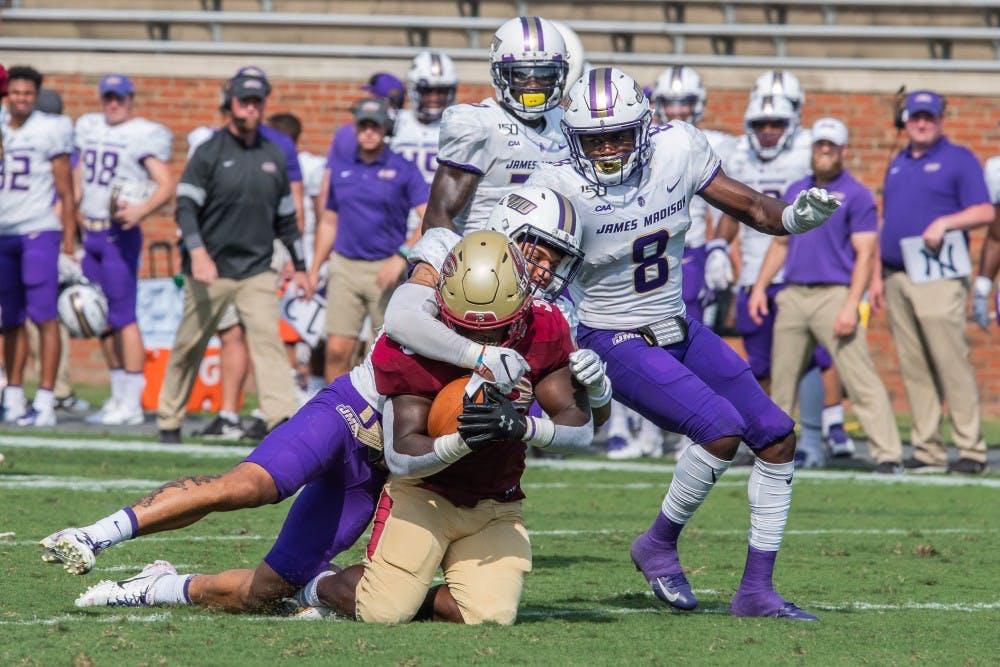 The lead up to this game was nearly identical to the last time the two Colonial Athletic Association (CAA) teams met where the Phoenix won 27-24. The teams were once again ranked in the top 25, the matchup took place on family weekend and the matchup would put Elon's junior quarterback Davis Cheek against JMU's senior quarterback Ben DiNucci.

That's where the similarities end.

Curt Cignetti lead the Dukes to a convincing win in his first game back at Rhodes Stadium after assuming the role of head coach at JMU last year. The Dukes put up 521 total yards and six touchdowns against the Phoenix. After the game, Cignetti made a b-line to the Elon bench to embrace some of his former players.

"The game's all about the players," Cignetti said. "There's a lot of guys on the Elon football team that are going to be great successes in life and relationships I'll have the rest of my life."

Junior quarterback Davis Cheek finished 189 yards passing and a touchdown. Cheek had one interception this game that broke a streak of 240 consecutive passes without a pick. Cheek said that playing against his former coach did not affect his mindset coming into the game.

"It wasn't necessarily playing coach Cignetti or anything like that. Of course there's going to be a little bit more emotion. We weren't worried about that. We were worried about trying to do our job and execute," Cheek said.

The Phoenix started with the ball after the Dukes deferred the opening coin toss. The Elon offense, led by  Cheek, came out and instantly made a statement. Cheek connected with sophomore wide receiver Avery Jones for a 66 yard touchdown only 52 seconds into the game.

This would be the first and only time the Phoenix would reach the end zone.

On the other side of the field the JMU offense came out firing on all cylinders. The Dukes established the run throughout the game rushing for 336 yards. This was the most rushing yards the Elon defense has conceded this season. For defensive captain senior Marcus Willoughby this donation upfront was a wake up call.

"It was pretty much a lack of execution. They just kept hitting the c gap and the results showed. But this upcoming week that's our focus, getting better at setting the edge," Willoughby said.

While the Phoenix have found some success in explosive plays, the Dukes defense was able to limit their success throughout the game. The Phoenix were held to only 227 yards of offense. The only points outside the opening touchdown for the Phoenix came from a career long 50 yard field goal from sophomore kicker Skyler Davis.

The Phoenix look to regain a winning conference record when they travel to New Hampshire next Saturday at 3:30 to take on the University of New Hampshire Wildcats.