Duke professor talks about ancient revolts, importance of them in the modern context 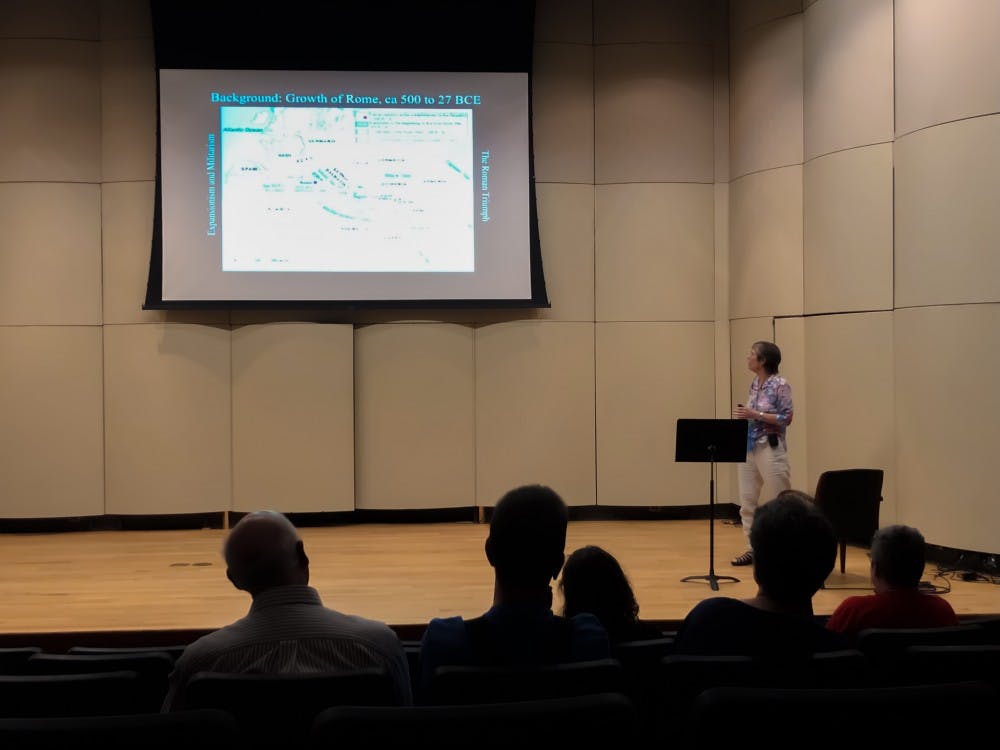 On Monday, Sept. 16, the Center for the Arts hosted Mary T. Boatwright, a classical studies professor at Duke University to talk about her work regarding first and second century era Jewish revolts against the Roman Empire.

The Duke professor, who has written numerous books about the early Roman Empire, used this time to talk about not just the history of Ancient Roman conquest and the Jewish revolts of the era, but their importance in the modern context.

Boatwright’s lecture focused on three main revolts: The Great Jewish Revolt, The Diaspora or Second Revolt, and the Bar Kokhba Revolt. During this period in history, the Roman Empire was focused on major territorial expansions.

“To look at the Jewish revolts allows us to take this analogy to think about antisemitism,” Boatwright said. “It’s really important to look at these events from ancient history, to try and understand them and their complexity, but also to look at them in context to see whether we can understand patterns of social behavior and of warfare, whatever it might be, at the same time we are thinking of these people who were involved in them as individuals”

All three of these revolts were Jewish uprisings against the Roman Empire at various points in time during the 1st and 2nd Centuries. Boatwright explained that this allows us to understand themes of militarism and imperialism, as well as antisemitism, both in ancient and modern contexts. She also talked about commonalities between these revolts, as they all happened while the Romans were consolidating their power and social tensions were rising.

Elon freshman Giselle Watts attended the lecture to complete a requirement for her Global Experiences course. Watts said that the event piqued her interest and talked about the importance of understanding past histories.

“Oftentimes people are just kind of fighting against each other and trying to find a way to argue and kind of release everything that’s happening at the time when they probably could have just talked it over,” Watts said.

She also said that she saw similarities between the Jewish revolts and modern societal issues.

“There was a lot of rebellion, but who was the leader of these rebellions? Also just not having the right leader of that time to help and kind of listen to the people per se, so yeah I definitely see that.”

Both Watts and Boatwright made connections between the Classical era and modern issues, outlining how historical contexts still affect us today. Boatwright spoke about the importance of viewing the people involved in these events as humans and why paying attention to the individuals who make up these histories is imperative to understanding their contexts.

“It’s awful to see the inhumanity of people acting against one another, and again it also is so important to recognize people as humans,” Boatwright said. “And if you view Roman history, as all of history, is complicated and self-contradictory.”