Elon faculty host a panel discussing the career of the former governor and U.N. ambassador 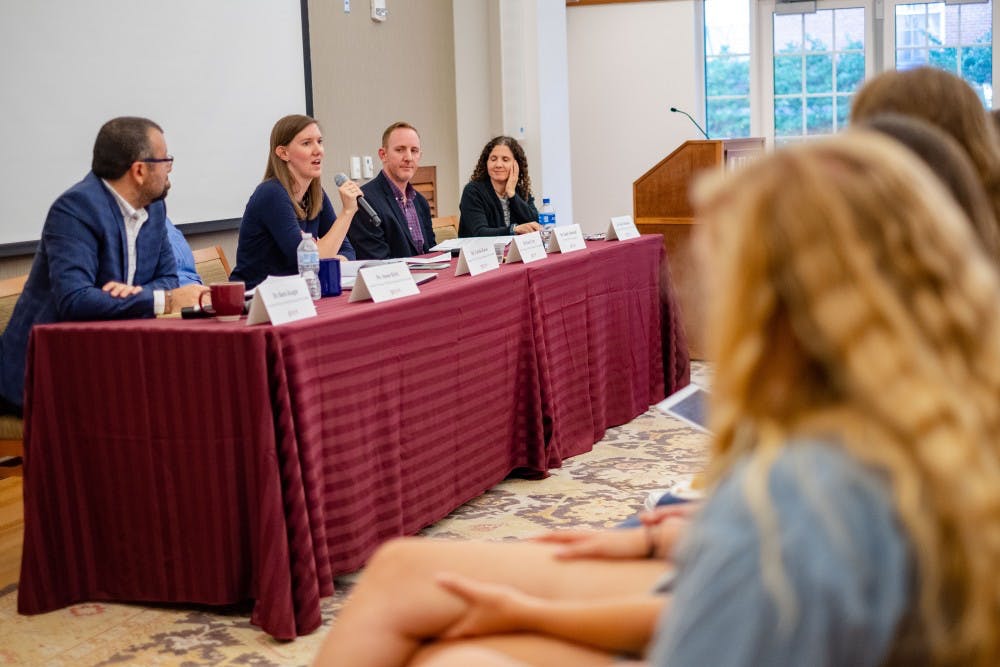 Nikki Haley, former U.S. Ambassador to the United Nations, is the keynote speaker at this year’s Fall Convocation. Haley’s visit has sparked discussion on campus regarding her political beliefs and her previous role in the Trump administration.

“This is an interesting moment in American public life,” said Jason Kirk, associate professor of political science and policy studies, explaining that Americans are now more civically aware than in the past.

The address is set to take place on Friday, Sept. 27 in Schar Center.

According to both Kirk and Eaves the panel was hosted in hopes of providing students with a better understanding of Haley’s speech and academically “interesting” career.

“It would just be a waste to not let students have that conversation. We would be doing you a disservice by not putting that expertise forward,” Eaves said.

The goal of the panel was to critically analyze Haley’s career from an academic rather than a partisan point of view, according to Kirk and Eaves.

“We see it as an opportunity to have a learning moment, a co-curricular moment,” Kirk said.

Eaves agreed that an emphasis on non-partisanship was important in studying Haley.

“It’s more to take an academic look at her record and what we can sort of glean broadly from her record,” Eaves said. “Our hope is to provide a broad overview of Nikki Haley for students who don’t know much about her. We’ll try to cover it from both sides, both how she fits in as an American politician and her sort of global role, and we’ll each speak for a brief amount of time.”

All questions from the event’s moderators, as well as those during the Q&A portion, were not pre-selected, according to Eaves.

“Part of bringing these big speakers to campus is that they negotiate their contracts,” Eaves said. “It’s not unique to Nikki Haley. Most of them are not doing sort of an open mic thing, but this event will give students an opportunity to ask their questions and have an academic panel try to provide them some feedback.”

She added that while the featured panelists have expertise related to Haley and her work, they cannot speak on behalf of the former ambassador.

“Obviously, we can’t speak directly for Nikki Haley and what she’s thinking about things, but we can talk about … how we should think about her in American politics and globally,” Eaves said.

The framing of the panel as a scholarly opportunity has been an important theme among panelists, according to Kirk and Eaves.

Kirk, who conducts research related to Haley’s career, said Haley’s speech at Fall Convocation has presented a “unique opportunity” to talk about “general issue areas that were prominent during Haley’s ambassadorship” such as the U.S. withdrawal from the Paris Climate Agreement during Haley’s tenure.

According to the U.N., the agreement aimed “to strengthen the global response to the threat of climate change” by attempting to control changes in global temperature this century.

After President Donald Trump decided to withdraw, Haley said the U.S. must work to “balance economic growth and environmental protection” and that “moving away from a flawed agreement” was one way to do so.

Haley was governor of South Carolina during the 2010 midterm elections, when the fiscally conservative Tea Party movement rose to prominence. She also dealt with what Eaves called the “domestic terrorism incident” in Charleston in 2015, where nine African Americans were killed at the Emanuel African Methodist Episcopal Church. Haley’s response to the incident involved the removal of the Confederate flag from the South Carolina statehouse.

“I think she is someone we will continue to see on the national scene,” Eaves said. “I think she’s an important figure to follow for that reason.”

Kirk agreed that following the trajectory of Haley’s career is important, describing her as a “rising Republican star.”

Kirk said that Republicans could be “looking to diversify their appeal,” a goal with which Haley’s career aligns perfectly. As the first female and first Indian-American to become South Carolina’s governor, Haley’s prominence lies in the historical significance of her career.

“There are few Republican women that have achieved the level of success that she has, so I think she’s interesting in thinking about sort of how she navigates the Republican party as a female politician,” Eaves said. “She’s also just come about at a really interesting time.”

Kirk, who has previously conducted research involving Haley and has an upcoming book currently under review, stressed that his involvement in the panel was not in any way promotional, but rather aligned with the overarching goal of the panel: context.

Kirk said he was asked to help “contextualize” Haley’s visit. Eaves agreed that the purpose of the panel was to provide a wider context around Haley’s career.

“I don’t think I’d use the word ‘controversy’ as the reason we’re doing this,” Eaves said of the panel, which did not plan to gloss over Haley’s stance on the Israeli-Palestinian conflict. “But I think it’s important to have broader context and then let students make that decision for themselves about whether or not they think she’s controversial or what her motivations are.”

This situation becomes especially important, according to Eaves, when considering the diverse range of exposure some students may have to Haley.

“Some students will know a lot about Nikki Haley,” Eaves said. “I mean, I teach Intro to American Government, and I’m always surprised by the breadth of knowledge … some people might know her more as a governor, some people have only heard of her as a U.N. Ambassador, so knowing more about that role as a governor will be important when thinking about where she stands on an ideological spectrum will be important.”

According to the Washington Speakers Bureau, Haley can be booked to speak exclusively through the agency. The WSB lists Haley’s potential speech topics as ranging from “American politics” to “leadership” to “inspiring lives.”

The WSB did not respond for comment on the cost to book a speech by Haley, though a representative said the information is available.

Tickets for Fall Convocation are still available at the Center for the Arts box office as well as in neighborhood offices across campus. According to senior Jasmine Walters, an employee at the CFA box office, there were as many as 130 empty seats remaining as of last Friday afternoon, Sept. 20.