Volleyball set for a new start 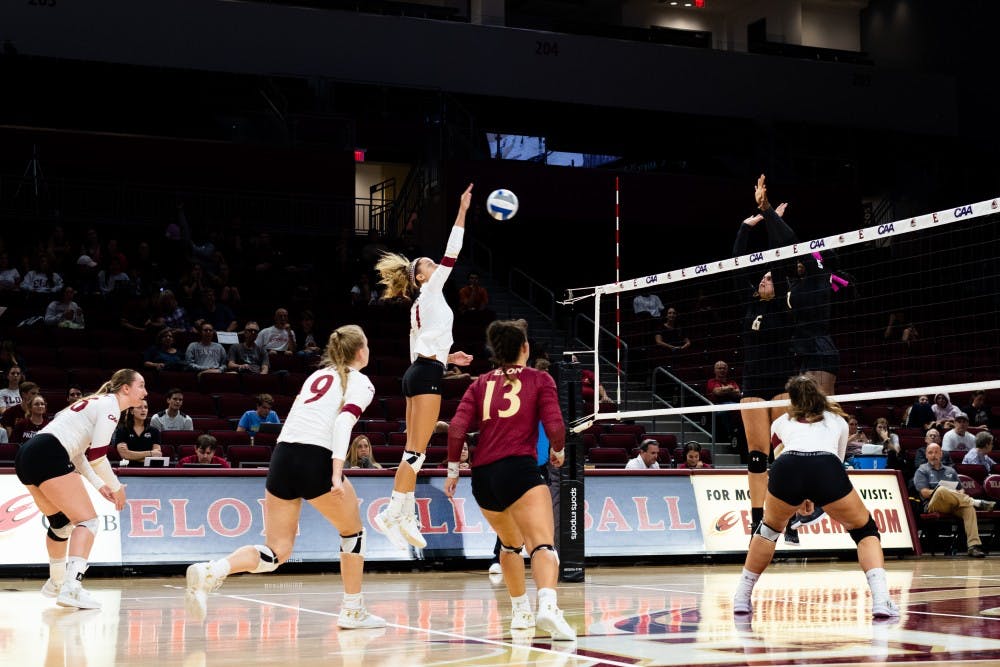 Elon University Volleyball takes the court this year with a brand-new identity. Not only is the team without their leading scorer from last year, but they also must run the gauntlet that is the Colonial Athletic Association (CAA) with a team that is a third freshmen.

Volleyball is not required to come to campus early like the football team, which can make training five new freshmen difficult. To make up for lost time over the summer, the team started the preseason with a retreat to Boone, North Carolina to prepare in a low stress environment.

The preseason retreat was something brand new for head coach Mary Tendler and her players. The retreat included practicing at a local high school, cooking together and hanging out together without cell phones.

“I wasn’t sure what to expect. But it was great. I was worried that we were going to do some fun stuff and team bonding things, but then practices were going to be an afterthought. But actually, our practices there have been the best yet,” Tendler said.

The concept of the retreat proved to be an effective way to bring the team together which is vital as the team will face numerous challenges in 2019.

Outside hitter Kam Terry ‘19 was one of the most dominant outside hitters in Elon history. In her four-year career, Terry has tallied 1,346 kills which stands fourth all time in Elon Division I history. Last year, during her senior year, Terry was the undisputed leader on the team. Not only was she the only senior outside hitter, but she took nearly twice as many swings as the next highest outside hitter: 1,134 attempts to 598. As a result, Terry was the leading scorer for the Phoenix by a mile, outscoring the next closest hitter by 162 kills.

Terry was undoubtedly a great hitter for the Phoenix but a hitter is only as great as her setter. Fortunately, the Phoenix has a great one. Kodi Garcia is one of the best setters in Elon history and is still only in her junior year. Garcia was the setter for Terry’s last two seasons and tallied 2,089 assists in that time. Garcia will be joined by sophomore setter Haylie Clark who played in 64 sets her freshman year and scored 201 assists.

Though Terry took the majority of the swings last year, her legacy is left in good hands. In 2018, two freshmen stood out as the next top Phoenix hitters, Leah Daniel and Kellyn Trowse. Daniel and Trowse combined for 1,187 attempts and totaled 185 and 197 kills respectively. Though the two players stood in the shadow of Terry last year, they are poised to take control of the Phoenix offense this season.

“I think they seem to be all on the same page. And they seem to all be driven to succeed. And they’re bringing it every single day in practice,” Tendler said.

Defensively, the Phoenix have more experience with a strong mix of veteran leaders to aid the development of the new defensive players.

Both of the team’s seniors are middle blockers: Elizabeth Coil and captain Nori Thomas. They are joined up front by junior Natelie Cummins. The blockers totaled 184 blocks and averaged 1.82 per set which was fifth best in the CAA. There are also two new middle blockers Claire Richey and Jenn Krzeminski to learn under the veteran blockers, a process Thomas said is going exceedingly well.

“We had five newcomers who are just absolutely crushing it. I’ll tell everybody that asks me, ‘oh how’s the team looking this year?’ and I’m like honestly, we’re stacked this year. I’ve never been on a team where we’ve had so much depth,” Thomas said.

Behind the core group of blockers, the team has experienced a new change of leadership. Junior defensive specialist Isabella Seman has made a leap to co-captain this year alongside Thomas. Tendler noted that Seman is one player in particular that is forced to grow into the role of a defensive leader. Seman sat behind two seniors in 2018 and is now the oldest defensive specialist, charged with training new defenders.

“She is doing a great job and not just competing against them, but also teaches them and makes sure they understand things,” Tendler said.

Phoenix volleyball is set to return to the court Aug. 30 when they travel from Elon to Moon Township, Pennsylvania for the RMU Sheraton Invitational where they will take on McNeese State University, Robert Morris University and Manhattan College. The team follows that up with the Liberty Invitational in Lynchburg, Virginia before returning home for the Demon Deacon/ Phoenix Challenge in Schar Center. CAA play starts for the Phoenix just in time for Family Weekend when the team takes on Hofstra University Sept. 27 and Northeastern University Sept. 29, two games that are vital.

“Every year we’ve played at Northeastern, we’ve lost to them and five times at their place. So, we talked this year about going against some of our teams we don’t necessarily see as rivals but see as people that we’re itching to beat,” Thomas said.

"Every year we've played at Northeastern, we've lost to them and five times at their place. So, we talked this year about going against some of our teams we don't necessarily see as rivals but see as people that we're itching to beat."

This season, the Phoenix are projected to finish eighth in the CAA in front of only the William & Mary Tribe, according to a preseason poll by the conference’s nine volleyball coaches. The Phoenix finished 4-12 in conference and 13-15 overall. Though the Phoenix faced many challenges last year and are starting with a new identity this year, Tendler and her team are ready to turn heads and defy expectations.

“We’re excited to get back on the court again. And you know having a third of our players new, we’re going to a different look to us,” Tendler said. “I think some people that come to some of our matches they’re going to be like, ‘Wow she didn’t look like that last year.’”