Elon football full of growth for the new season 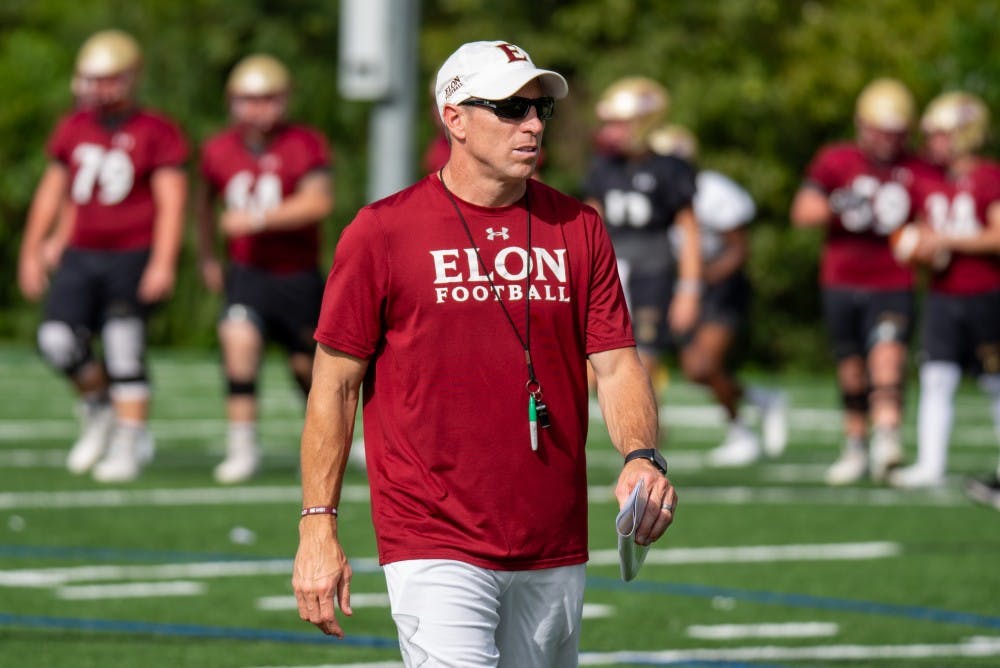 Photo by Zach Ohmann | Elon News Network
Elon football head coach Tony Trisciani gets his team ready for their first game of the season in practice on Aug. 27, 2019

Elon University football (6-5 in 2018) takes the field in 2019 with all eyes on them after their groundbreaking 2018 campaign. A new coaching staff, returning stars and seniors poised to end their careers on a high note gives fans at Rhodes Stadium a lot to stand up and cheer for.

"Football season is just about here. This is what we work for."

“We’re thrilled. Football season is just about here. This is what we work for. This is the reward for all the work in the season,” said Tony Trisciani, first year football head coach.

Game one on the road against North Carolina A&T State University will see the Phoenix offense at full strength for the first time since Oct. 13, 2018. Junior Davis Cheek, the star quarterback, is back from a debilitating knee injury suffered at the University of Delaware in Week Six. Prior to his season ending injury, Cheek completed 66% of his passes for 1,018 yards. Cheek is rejoining a fully loaded offense that is returning four of his five favorite targets including Elon’s top wide receivers senior Cole Taylor and junior Kortez Weeks. Before Cheek’s injury, the trio combined for 40 receptions and 562 yards.

In the absence of Cheek, the offense rallied behind the strong running back duo of senior De’Sean McNair and sophomore Jaylan Thomas that combined for 1,138 rushing yards, over 50% of the teams total rushing production and 10 touchdowns. The duo worked in perfect tandem due to their different styles of running.

Thomas, the electric Offensive Rookie of the Year, averaged a conference high 6.5 yards per carry with his quick cutting ability that left defenders frozen in the open field. McNair was the bruiser on the team. At 5’8” and 214 lbs, McNair was called in for short yardage and goal line situations where he would bowl through defenders for a team high six touchdowns. Cheek noted that the development of experienced guys mixed with the fire of the younger players is what will make this year’s offense so special.

“It’s really amazing to see what we’ve done as players and the coaching staff as well, what they’ve done for us. And it’s just really awesome to see and I’m looking forward to seeing the results,” Cheek said.

The defensive side of the ball was the backbone of the Phoenix success in 2018. However, in 2019, it is the source of the most questions. The team will enter A&T without the leadership of former linebacker Warren Messer and will be playing with a major hole in the heart of their defense.

Messer ended his career a two-time STATS FCS All-American with 318 tackles (seventh in Elon FCS History) and 13.0 sacks (T-1 in Elon FCS History). With the change of head coach, Trisciani brought in his former fellow Villanova defensive coach, Billy Crocker, to take lead of the defense.

The Phoenix added three additional defensive coaches to Crocker’s new staff in January 2019 which includes a new safeties coach, cornerbacks’ coach and a new defensive line coach. The new coordinators will be inheriting a veteran side that features seniors on all three levels of the defense.

The defensive backfield is captained by senior Greg Liggs Jr., Elon’s resident shutdown cornerback. Liggs nabbed a CAA high four interceptions and defended eight more on his way to being named Second Team All-Conference in 2018. Liggs proved himself to be an excellent cover corner by recording 65 tackles, second only to Messer.

Liggs is joined in the defensive backfield by fellow senior Zavier Williams and will be tasked with instructing a young group of defensive backs that includes former quarterback junior Jalen Greene. Greene is making a position change in 2019 to safety. The linebacker position will be the hardest transition for the Phoenix who graduated not only Messer but also veteran linebacker Matt Baker. There are only two returning senior linebackers, T.J. Speight and Ryan Whitehead, who only started a combined five games in 2018.

Developing linebackers to replace the void that is Warren Messer is a tall task that will be a top priority for Crocker and company. In front of the linebackers stands an intimidating defensive line led by senior defensive end Marcus Willoughby. The reigning Third Team All-CAA player terrorized opposing backfields with 58 tackles, 6.5 of which were for losses last season.

Willoughby is not only a run stuffer but also the Phoenix premier pass rusher. In the past two years, he has 10 quarterback hurries and notched 9.5 sacks. He is joined by fellow senior Jordan Dollerson who tallied 33 tackles, 3.5 of which were for a loss in 2018. Willoughby said that Coach Crocker has put a twist on Trisciani’s 3-3-5 defense, nicknaming them “The Men of Mayhem,” for the way they chase down opposing ball carriers.

“We’re flying around the ball. I feel like our defensive line is deeper than ever. Our linebackers are young but we’re still going to get the job done. Our corners, with the addition of Jalen [Greene], are just getting more athletic on the field so we can run with teams like USF (University of South Florida) last year,” Willoughby said.

Aug. 31 will be the first time the Phoenix clash with A&T since 2015 when the Aggies downed the Maroon and Gold 14-7 at Rhodes Stadium. The Aggies went 10-2 in 2018, including a 24-22 win over Alcorn State in the Air Force Reserve Celebration Bowl. They also return some top players on both sides of the ball that will serve as tough matchups for the Phoenix. Liggs will likely be tasked with marking A&T’s redshirt junior wide receiver Zachary Leslie who had 50 receptions for 676 yards and nine touchdowns in 2018. For Cheek, Taylor and the rest of the offense, they will compete against redshirt junior defensive back Mac McCain III and a defense that allowed only 14.2 points per game. Trisciani expressed his excitement to start his head coaching campaign against such a high caliber opponent.