Elon University celebrates the class of 2019 during Commencement 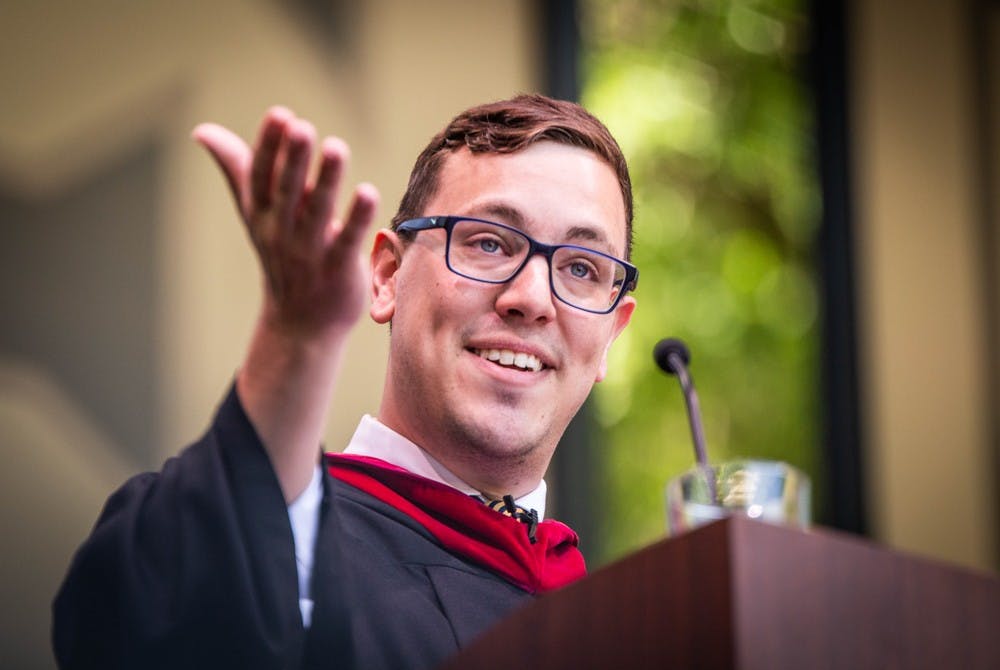 
Commencement speaker Al Drago '15 addresses the class of 2019 on Young Commons during the Commencement ceremony on Friday, May 24. [Abby Gibbs].

A picture-perfect day greeted Elon University's class of 2019 as they walked from Alumni Gym to Under the Oaks and faced the Alamance Building one last time as undergraduates Friday, May 24. But the class was missing a part of its family.

“Today is a challenge because the reality of life is raw and present. The mixture of pain and joy, of love and loss,” Book said.

“However you come to this day, I ask you to make room in the time ahead to feel, to pay attention to your hearts and spirits, giving them space to speak to you,” Fuller said.

After a rendition of the national anthem from senior Tres McMichael and an address from senior class president Colton Cadarette, commencement speaker Al Drago '15 took the stage with his signature sidekick in hand.

Drago, a photojournalist at Elon and in his postgraduate life, made sure to capture his experience as the headliner from a different angle.

“There was something special about being here — it was electric,” Drago said of his first time stepping on campus as a high school junior. “I knew this was the place I wanted to be. … No matter where you go in the world, that energy is what brought you to Elon in the first place. It’s what powers the engaged and experiential learning on campus.”

""There was something special about being here — it was electric."

Drago offered some words of wisdom to the graduating class and broke it down into a succinct list for graduates to follow. Drago said Elon prepares students for everything they will need to succeed in life, using the anecdote of a Winter Term class to help him tell the story of the "political landscape" during the 2016 presidential election.

Drago recounted his time covering the White House for The New York Times and taking the now-famous picture, known as “The Hug.” “When everyone is counting on you, stay cool under pressure,” Drago said.

2. Look at life through your own lens

Instead of covering the Clinton-Trump campaign directly, Drago stayed with then-president Barack Obama as he campaigned for Hillary Clinton. Drago used Snapchat, the now-popular social media platform that was just taking off at the time. He used Snapchat to document what he was seeing in his daily life. He later partnered with Snapchat and was recognized as one of the top 10 people to follow during the election.

“Sometimes a typical day at the office can have an unexpected ending,” Drago said. Instead of going to Mar-a-Lago with President Trump over this past holiday season, Drago was whisked away in the middle of the night to cover a top-secret trip with the president to Iraq where Trump held a rally for the troops stationed there.

No more than two weeks ago, Drago was in Washington, D.C., when his friend and fellow Elon alumnus Gary Grumbach '16 called him to give word that Special Counsel Robert Mueller was out and about in the city — something he rarely does. Drago said he took his dinner off the stove and biked out to meet Grumbach, and his photography was online by the time he got back home to finish cooking. “You never know where life’s opportunities will take you,” Drago said.

Drago urged the grauating class to find the people and things in life that will make them happy. “Not the ones who will get you the most likes on Instagram,” Drago said with a laugh.

“Watch out world — here comes the Elon class of 2019,” Drago said to close his remarks.

Following Drago, Steven House gave his final commencement address as acting university provost. House recognized students who earned honors during their time at Elon, asking those who earned Latin honors to stand proudly before their peers and families.

McMichael closed out the ceremony singing Elon's alma mater after Book conferred the degrees earned by the class of 2019. Before departing, Book sent out a charge to the graduating class.

“I charge you to be resilient and steadfast, like the mighty oaks which tower over us this morning,” Book said. “Oaks are important at Elon as they symbolize our community’s strength. Elon, Hebrew for 'oak,' planted in a place that is special to you.”

The ceremony concluded with one final “Long Live Elon!” from all in attendance.