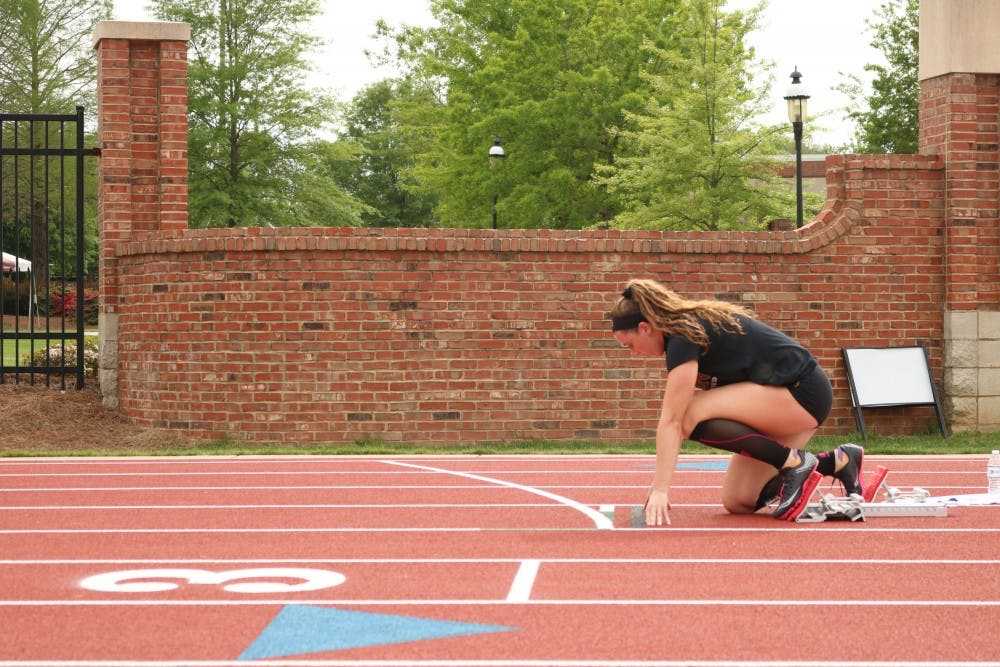 Photo by Alex Reynolds | Elon News Network
Senior Lauren Brzozowski positions herself on the starting block as she prepares for her final CAA Championship at practice on Thursday, April 25.

With the Colonial Athletic Association track and field championships set to kick off this Friday, May 3, Elon University’s women’s track and field team will be looking for a shot at redemption. Elon will host the championship for the first time since 2016. And coincidentally, that was also the last time the Phoenix took home the CAA title.

With back-to-back second place finishes in the 2017 and 2018 seasons, Brzozowski is eager for her final shot at another championship.

“We’re hosting my senior year,” Brzozowski said. “I definitely want to leave our girls with something — like a championship under their belt.”

Brzozowski said the team has been through a lot in recent years. Last season, the Phoenix lost to Northeastern University in the championship by a mere 1.5 points. Brzozowski called the loss “devastating.”

Brzozowski said that loss has served to motivate the team this year and in the upcoming championship.

“I think this year was definitely kind of a confession of character for all of us,” Brzozowski said. “Just seeing how hard we wanted to work to get to this moment.”

One of the bright spots on the team this year has been the leadership among the seniors. Senior distance runnerChelsea Smith won the 800-meters in the Phoenix Invitational on April 6. Smith said she and the other captains have been working toward building a positive environment for the team.

“The leadership has been good this year,” Smith said. “I think we’ve just tried to create a dynamic where everyone is super open and can talk about anything they want.”

Smith also said hard work does not go unnoticed on this team.

“We are not too hard on anyone. We try to uplift people,” Smith said. “When we see people working as hard as they can, that’s all we want as leaders.”

Going into this season, Smith also talked about the goals for the members of the team.

“We just wanted each and every person on the team to get just a little bit better than they were last year and just put a little more work and just have that much more confidence in themselves to race and everything,” Smith said. “I think we have definitely seen that over the course of the year.”

Brzozowski said the team atmosphere for the Phoenix is what sets it apart from the rest of the competition.

“I think just having that positive, competitive atmosphere here separates us from our competition, and has made us really close-knit,” Brzozowski said.

Head coach Mark Elliston is preparing to lead the team through the championship. This is Elliston’s 13th season as the director of the program and his 30th year of NCAA Division I and II coaching experience. Elliston also led the Phoenix to two consecutive CAA Championships in the 2015 and 2016 seasons.

Like Smith, Coach Elliston said there is strong leadership among the older members, despite having more than 40 athletes on the team.

“We have three really distinctive groups, and they hang out together, they’re there for each other,” Elliston said. “We’ve got some great senior leaders like Lauren [Brozowiski] and Chelsea [Smith]. There’s seven or so all together that are doing their part.”

In addition to hanging out together, Elliston said the leaders pass on wisdom to the underclassmen on the team.

“It hasn’t been perfect, but we have definitely had some great opportunities to do some big things,” Elliston said. “Now we are going to get to see all of that come together at the conference meet, and I think that’s where it just becomes, ‘Hey, ready or not, here we go.’”

As far as the goal set out for the Phoenix going into the season and the championship, Elliston said it tends to stay the same.

“We always like to put, ‘Take a shot at the title,’ as our goal,” Ellitson said. “We want to try to win. We want to do the best we can, and then we assess how we are doing through the year.”

Brzozowski, Smith, Elliston and the rest of the Phoenix will attempt to reclaim the CAA title next week. The CAA Championship will take place on Friday, May 3, and Saturday, May 4, at the Jerry and Jeanne Robertson Track and Field Complex, located next to Rhodes Stadium.